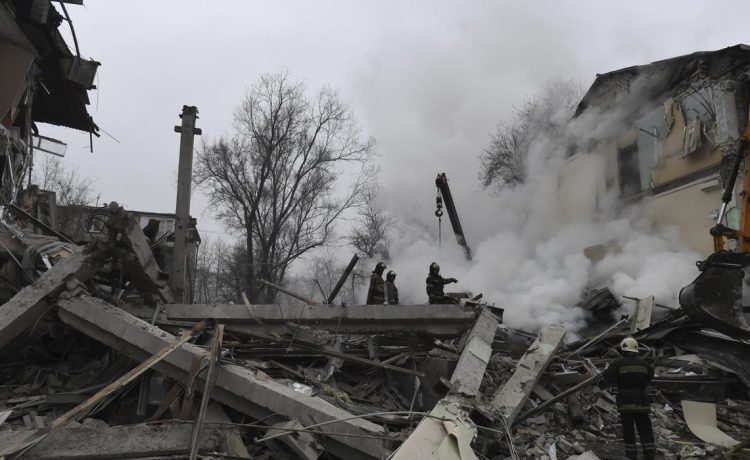 Hope for a cease-fire between Moscow and Kyiv faded further Monday as Ukrainian leaders vowed revenge for Russia’s weekend airstrike on an apartment building in Dnipro that killed at least 40 civilians, while rescue workers searched for dozens more still feared to be trapped beneath the rubble.

Around-the-clock rescue efforts in the southeastern Ukrainian city dragged through a third day amid signs the Kremlin intends only to escalate its brutal attacks on civilian targets and launch a potentially major new offensive against Ukrainian forces.

Western analysts believe Moscow is now laying the groundwork for a “protracted war” that could see fighting grind on for months or perhaps longer, with Russian military commanders apparently believing they have a window in Ukraine’s east to reverse the gains of Kyiv’s counteroffensive push late last year.

The growing likelihood of a bloody, drawn-out war between Russia and Ukraine comes as the West grapples with what types of military aid — and how much of it — to provide to Ukrainian forces while limiting the risk of dangerous escalation with Moscow.

The U.S. and Britain have ramped up their aid packages during the past several weeks.

U.S. Joint Chiefs of Staff Chairman Gen. Mark Milley made headlines Sunday by asserting that the U.S. has also expanded combat training for Ukrainian soldiers in Germany, with a goal of getting a battalion of about 500 Ukrainian troops back on the battlefield to fight the Russians in the next five to eight weeks.

But other Western powers have appeared more cautious.

In Germany, for example, Defense Minister Christine Lambrecht resigned Monday amid a string of public-relations missteps and after bearing the brunt of criticism for Germany’s seeming reluctance to send heavy weapons to Ukraine.

In the wake of Ms. Lambrecht’s resignation, some Germany analysts say Chancellor Olaf Scholz has a chance to redefine Berlin’s role as a leader in providing lethal aid to the Ukrainian military.

Those attacks came on the heels of Saturday’s airstrike on the Dnipro apartment complex, which was home to about 1,700 civilians.

Russian forces have hit Ukrainian civilian targets throughout the nearly 11-month war, but the apartment attack has struck a nerve inside Ukraine.

In an address Monday, President Volodymyr Zelenskyy decried the “evil” attacks on civilians and urged Russian citizens to stand up against their own military.

“I want to say to all those in Russia — and from Russia — who even now could not utter even a few words of condemnation of this terror, even though they see and know everything perfectly well,” Mr. Zelenskyy said.

“Your cowardly silence, your attempt to wait out what is happening will only end with those same terrorists coming after you one day,” he said. “Evil is very sensitive to cowardice. Evil always remembers those who fear it or try to bargain with it. And when it comes after you, there will be no one to protect you.”

The Ukrainian president also vowed that “everyone will be held to account for terror” attacks against the Ukrainian people.

The harsh words came just a few weeks after signs had emerged that Moscow and Kyiv were taking baby steps toward potential peace talks.

Ukraine had publicly insisted that any peace talks be predicated on Russia returning all of the Ukrainian territory it has seized, including Crimea, which Moscow forcibly annexed in 2014.

Russian President Vladimir Putin, meanwhile, had called for a temporary cease-fire earlier this month to mark Orthodox Christmas, although Mr. Zelenskyy and his Western allies rejected the offer as a cynical ploy to buy time for Russia to refit its troops.

Despite the two sides being miles apart on the terms, the apparent openness to at least address the concept of negotiations had sparked glimmers of hope that the war could end in 2023.

Specialists now say the signs point in the other direction.

In a detailed analysis Sunday, the Washington-based Institute for the Study of War (ISW) said Russia appears to be making preparations for a long slog in Ukraine.

“The Kremlin is likely preparing to conduct a decisive strategic action in the next six months intended to regain the initiative and end Ukraine’s current string of operational successes,” the think tank said. “While Putin has not changed his objectives for the war, there is emerging evidence that he is changing fundamental aspects of Russia’s approach to the war by undertaking several new lines of effort.”

Notably, Moscow is shifting its force-generation operations to include more mobilization of reserve forces and perhaps even a large-scale draft, the ISW said.

Russian military leaders also appear to be strategically keeping some mobilized personnel in reserve for future campaigns rather than immediately rushing troops to the front lines, the institute said.

It added that Mr. Putin is also putting public pressure on Russia’s defense industrial base to ramp up its production of weapons, drones, ammunition and other materials.

Analysts also said the recent installment of Russian Gen. Valery Gerasimov as Mr. Putin’s point man in Ukraine suggests the Kremlin wants greater centralized control over the war effort, rather than relying on theater commanders who so far have not achieved the desired results.

Kremlin officials also warned the U.S. and Britain over their recent decisions to ramp up arms deliveries to Ukraine.

Britain announced over the weekend it would deliver 14 Challenger 2 tanks to Ukraine. That announcement came on the heels of the U.S. recently sending Patriot missile defense systems and Bradley fighting vehicles to Kyiv.

“They are using [Ukraine] as a tool to achieve their anti-Russian goals…These tanks are burning and will burn just like the rest,” Mr. Peskov said, according to Reuters.

Meanwhile, the West may soon get a deeper glimpse inside the operations of Russia’s Wagner Group, the shadowy mercenary army controlled by business magnate Yevgeny Prigozhin that is playing an increasingly prominent role in the Ukraine campaign.

The outfit has claimed credit for the recent capture of the city of Soledar, though Ukraine insists its forces are still battling for control of the city.

Andrei Medvedev, who claims to be a former Wagner commander, recently fled Russia and is seeking asylum in Norway, according to media reports. He claims to have witnessed several extrajudicial killings by Wagner fighters, and is believed to be the first Wagner commander to have fled to Europe, the Moscow Times reported Monday.