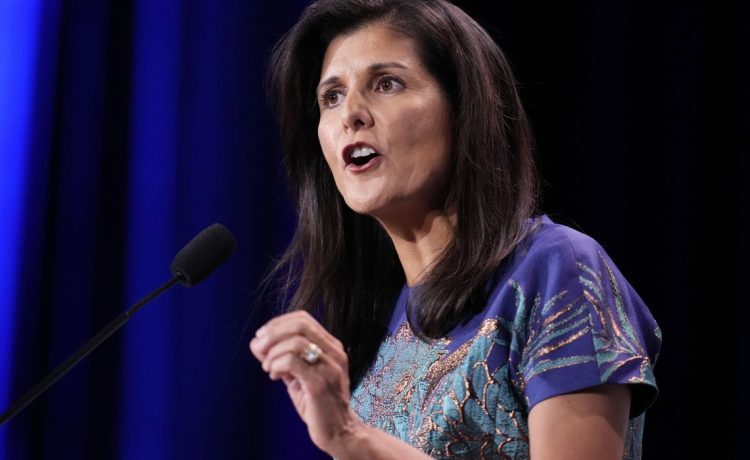 Former United Nations Ambassador Nikki Haley said in the spring she would not run for president in 2024 if former President Donald Trump staged a political comeback.

But following the midterms, Ms. Haley changed her tune. She joined a growing list of her Republicans who are refusing to let Mr. Trump’s return put the kibosh on their White House aspirations.

“A lot of people have asked if I’m going to run for president now that the midterms are over,” Ms. Haley, who also is a former South Carolina governor, said at the recent Republican Jewish Coalition Annual Leadership Meeting in Las Vegas. “I’ll look at it in a serious way and I’ll have more to say soon.”

The willingness to challenge Mr. Trump marks a dramatic shift in the GOP.

The 76-year-old has ruled the party since he defeated Hillary Clinton in 2016 and maintained his grip on the party despite losing to President Biden in 2020, and losing the House and Senate on his watch.

“The power to persuade and keep people out of the race evaporated on Election Night,” Mr. Levesque said. “This is the weakest he has been since he was elected president.”

Mr. Trump and his allies had planned for his announcement to come on the heels of a series of midterm wins by Trump-backed candidates. Instead, several of Mr. Trump’s preferred picks lost. His role in the party is now facing renewed scrutiny, including from some of his possible rivals in the 2024 GOP presidential nomination race.

The overall response to the Trump announcement — the earliest declaration of a presidential run in U.S. history — was somewhat underwhelming in GOP circles.

GOP megadonors announced they would not back his primary bid, signaling they are more interested in other potential candidates such as Govs. Ron DeSantis of Florida and Glenn Youngkin of Virginia.

Mr. DeSantis contrasted his landslide reelection victory on Nov. 8 to the struggles of Trump-backed Republicans in other states.

“And, you know, at the end of the day, I would just tell people to go check out the scoreboard from last Tuesday night,” Mr. DeSantis said last week.

Former Secretary of State Mike Pompeo took to Twitter to take a swipe at his former boss.

“We were told we’d get tired of winning. But I’m tired of losing. And so are most Republicans,” Mr. Pompeo, another potential 2024 competitor, said.

Former Vice President Mike Pence, meanwhile, has been making the case it is time for the party to turn the page.

The GOP, he has said on a book tour, fell short of their midterm expectations in part because candidates embraced promoted Mr. Trump’s stolen election claims struggled.

Mr. Pence also refused to rule out a run, saying, “I’ll keep you posted on whether I’m going to run or not. … But I do think we’ll have better choices” than Mr. Trump.

President Biden, it appears, is set to square off with the winner of the GOP nomination race, and feeling good about his chances after Democrats stronger than expected midterm performance.

Democrats are optimistic Mr. Biden would win a rematch but are concerned the 80-year-old president could struggle against other Republican candidates with less baggage.

The Trump team is betting a crowded GOP field would benefit the former president in much the same way it did in 2016 when his critics failed to coalesce behind a single alternative, allowing him to win primaries in states such as New Hampshire and South Carolina with roughly a third of the vote.

Govs. Larry Hogan of Maryland and Chris Sununu of New Hampshire are thought to be considering presidential bids, along with Sens. Ted Cruz of Texas, Josh Hawley of Missouri and Rick Scott of Florida.

Saul Anuzis, the former chair of the Michigan Republican Party who now runs the seniors advocacy group 60 Plus American Association, said a primary fight was something Mr. Trump wanted to avoid.

“I think there are three kinds of Republicans out there: pro-Trump, anti-Trump, and those who want to move on. And I think the group of those that want to move on is growing,” he said. “Trump’s intention was to get in and clear the field, which didn’t happen, and because it didn’t happen, it raises questions as to whether he would stay in. … I am not convinced given the lackluster response he got from his announcement that he stays in the race.”

The diminished appetite for a Trump comeback has not been lost on his possible rivals.

“We keep losing and losing and losing,” Mr. Christie said at the Republican Jewish Coalition’s meeting. “And the fact of the matter is the reason we’re losing is because Donald Trump has put himself before everyone else.”

Mr. Christie has criticized Mr. Trump for backing bad candidates and using his stolen election claims as a litmus test for his support.