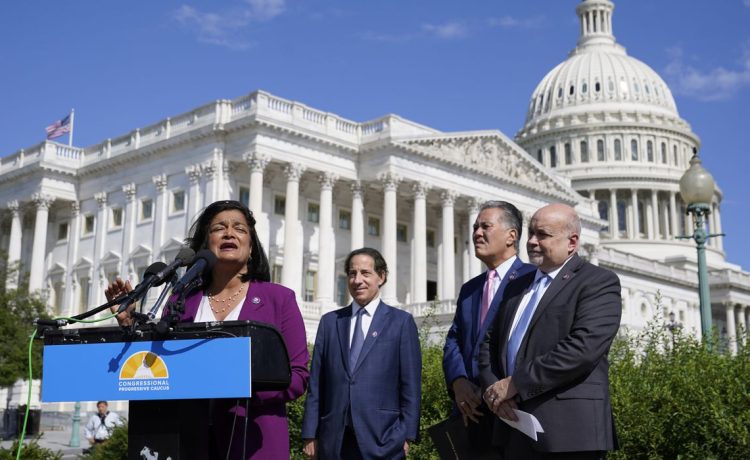 The Democratic Party’s most committed progressives are celebrating the expansion of their congressional numbers in last week’s midterm elections, as members prepare to bring forward a left-leaning agenda and fight Republicans who are expected to narrowly flip control of the House.

“There is no question that this will be the most progressive Democratic caucus in decades,” Ms. Jayapal told reporters. “There was no red wave.”

Congressional Democrats outdid themselves to hold onto dozens of vulnerable seats in the midterms, despite historical expectations and polling that signaled a bullish year for the GOP.

CPC members cruised to reelection in safe blue districts, and decidedly leftist candidates were victorious in several open seats across the country.

Part of the success is credited to youth voters, who turned out in unexpectedly large numbers Nov. 8 to secure wins for members who align themselves with a more expansive agenda of universal health care, student debt relief, and expanding the social safety net.

“We’re going to get higher numbers at our current age than any other generation has ever voted at this point. Things are looking up for young voters and Democrats who continue to propose bold legislation that’s going to excite people like canceling student debt,” said Florida Rep.-elect Maxwell Alejandro Frost, who at 25 will be the first Gen Z member elected to Congress.

After months in which leading Democrats had been bracing for major losses, Ms. Jayapal said she expects the Progressive Caucus in the new Congress to remain the same size as the current one, which has about 100 members.

Among the other new progressive representatives-elect are Reps.-elect Becca Balint of Vermont, Greg Casar of Texas, Jasmine Crockett of Texas, Robert Garcia of California, Jonathan Jackson of Illinois, Summer Lee of Pennsylvania, Morgan McGarvey of Kentucky, Delia Ramirez of Illinois, Shri Thanedar of Michigan and Jill Tokuda of Hawaii.

Ms. Lee, who was backed by the liberal PAC Justice Democrats, discussed the fierce opposition she faced in Pennsylvania’s 12th district, which includes much of Pittsburgh. Millions of dollars from outside moderate Democrat and pro-Israel groups sought to defeat Ms. Lee in the primary, where the party establishment backed attorney Steve Irwin.

Ms. Lee, who will be the first Black congresswoman from Pennsylvania, said it’s challenging for candidates to the left to fend off rivals who have big donors behind them.

“Progressives are the target,” Ms. Lee said. “[It’s] not just the parties. We come from the portions of our country, the demographic of our countries that are already less inclined to have access to that sort of money, to have access to wealthy donors and friends and family members of political connections.”

But, the CPC is likely to face challenges if Republicans take over the House, even in narrow numbers.

Ms. Jayapal said there are issues where her caucus would balk at bipartisanship, especially as she views the opposition as moving further to the right.

She added: “Democrats are always going to be there for things that make sense for lifting people up and creating opportunity. If that’s a Republican Party that comes out in Congress, then maybe. Forgive me for being dubious, but that’s what we’re going to [have to] see.”