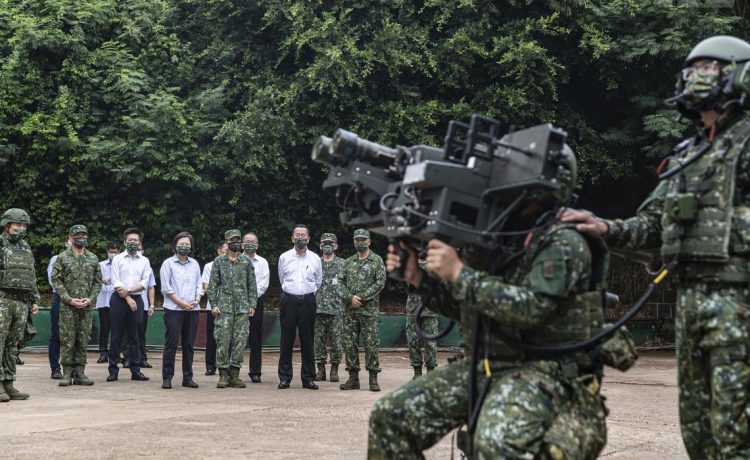 The measures are contained in a 4,400-page joint bill made public late Tuesday, which authorizes $857.9 billion for defense and nuclear forces spending.

The figure is $10 billion more than was sought by both House and Senate Armed Services Committees, and some $45 billion above President Biden’s initial request. The bill includes the Senate’s Taiwan Enhanced Resilience Act as an amendment that was added with bipartisan backing.

That amendment requires the Pentagon to help modernize Taiwan’s military to deter and, if need be, defeat an attack by China.       The increased defense support for Taipei comes as tensions remain high across the Taiwan Strait.

Secretary of State Antony Blinken and military leaders recently warned that China is speeding up its timetable for taking control of the island, which it considers a part of its sovereign territory. An attack could take place within the next several years, U.S. officials say.

The bill directs $10 billion to be spent on security aid for Taiwan over the next five years to modernize the island military’s security capabilities — contingent on Taiwan increasing its own defense spending. It also would loosen rules of foreign military sales and financing to help speed up deliveries of U.S. arms.

Other provisions of the bill will require a government-wide program to counter what the drafters say are Chinese disinformation, influence operations and economic coercion targeting Taiwan. The bill mandates developing a strategy of counter covert, coercive and corrupting activities by the ruling Communist Party’s “united front” work against Taiwan, including media training for Taiwan officials and organizations targeted by Chinese disinformation operations.

The Biden administration also would have six months under the bill to set up an interagency task force to counter Chinese economic coercion.

The bill also contains a sense of Congress provision strengthening the 1972 Taiwan Relations Act, stating explicitly that it is U.S. policy for the Pentagon to maintain military capabilities to prevent a fait accompli — defined as a resort to force against Taiwan by China. The bill also will require the U.S. government to label Taiwan as a “major U.S. ally.”

Another provision calls for the U.S. Indo-Pacific Command to upgrade joint training with the Taiwan military, with exercises focusing on defending the island from Chinese attack.

Other weapons for Taiwan called for under the legislation, considered a must-pass measure for the soon-to-disband lame-duck Congress, include precision 155-millimeter artillery shells, PAC-3 missile defenses, joint air-to-ground missiles, Harpoon anti-ship missile, naval strike missiles and naval mines. The weapons will be stored in a contingency stockpile near Taiwan.

Highlighting bilateral concerns about Chinese aggression, the defense bill requires Secretary of Defense Lloyd Austin to set up a joint force headquarters in the Pacific with the goal of preparing U.S. forces to “fight tonight.” Also required under the bill is an effort to accelerate deployment of integrated missile defenses to protect the island of Guam, the U.S. military’s major hub in the region. China has deployed DF-27 intermediate-range missile that state media has called the “Guam killer.”

“This legislation will clarify in even starker terms the reality of the U.S.-Taiwan relationship: Taiwan’s democracy remains the beating heart to our Indo-Pacific strategy, and the depth and strength of our commitment to the people of Taiwan is stronger than ever,” said Senate Foreign Relations Committee Chairman Bob Menendez, the New Jersey Democrat who sponsored the Taiwan legislation.

The bill authorizes $816.7 billion for the Pentagon and $30.3 billion to fund Energy Department nuclear weapons programs.

The fiscal 2023 defense authorization bill made public on Tuesday rejects efforts by the Biden administration to kill two nuclear weapons that are supported by U.S. military leaders — the sea-launched, nuclear-tipped cruise missile known as SLCM-N and the B83 gravity bomb.

A section of the authorization bill requires the Pentagon to report to Congress on deterring theater nuclear threats from China, Russia and North Korea. It also mandates that the military present Congress with plans on how to deploy the SLCM-N, which will carry a low-yield warhead described in the bill as a variant of the W80-4 warhead. The warhead has a flexible yield of between 5 kilotons and 150 kilotons.

Congress added another $25 million for the new cruise missile that supporters say is enough to keep the program on life support.

In its recent nuclear posture review, the administration called for canceling both the nuclear cruise missile, which would be launched from surface ships or submarines, and the B83, which is carried by the B-2 bomber and is designed to target deeply buried targets.

But Strategic Command headAdm. Charles Richard told Congress last summer that “a non-ballistic, low-yield, nontreaty accountable system that is available without visible generation” — the SLCM-N — “would be very valuable.”

The sub-launched cruise missile was backed in a 2019 Pentagon study that said it was needed to deter rapidly expanding Chinese and Russian forces that include many less-powerful nuclear weapons. Adm. Christopher Grady, vice chairman of the Joint Chiefs of Staff, told Congress in May that the SLCM-N was approved by the Pentagon’s Joint Requirements Oversight Council.

The Biden administration’s revised nuclear posture review also killed the megaton-class B83 gravity bomb, regarded by strategic warfare leaders as needed to penetrate the growing number of potential enemy targets that are protected by being located deep underground. China in particular has many of its land-based nuclear weapons and infrastructure in a vast tunnel system dubbed the “Great Underground Wall.”

“I would concur with the utilization of that [B83 bomb] to complicate the challenges of the enemy against us, as long as there is not another system in place, and I know that is part of the issue with the transition,” Gen. Wolters said.

Threats by Russian officials to consider the use of nuclear weapons in the war in Ukraine is said to be a key factor in Congress’ balking at the plan to retire the B83. The defense bill requires a report on striking deeply buried targets, including the use of the B83.

The bill bans using any funds to dismantle or retire the more than 25% of the bombs in the active stockpile until the report is submitted to Congress. The administration is continuing to move ahead with the needed nuclear force modernization, slated to cost $1.2 trillion over 30 years.

The fiscal 2023 defense bill is named the James M. Inhofe National Defense Authorization Act to honor the ranking Republican on the Senate Armed Services Committee who is retiring at the end of the year.

“One thing remains clear: We are in the most threatened position of my lifetime,” the five-term Oklahoma Republican said in a statement on the bill. “Conservatives in Oklahoma and across the United States can be proud of what we secured in this year’s bill to protect our country from threats like China and Russia and give our troops what they need to complete their mission.”

Mr. Inhofe. 88, said the legislation makes funding U.S. nuclear forces a priority in response to “Chinese nuclear breakout” — the tripling of its warheads by 2035. The senator said the bill prevents the Biden administration from what he called unilateral nuclear disarmament by preventing B83 nuclear bomb retirement and keeping the SLCM-N.

Also, Mr. Inhofe said, the bill prevents liberals in the House and administration from imposing social engineering and other progressive agendas on the military. For example, the bill re-establishes gender-neutral fitness standards for Army troops after the service revealed dangerously low standards, he said.

Also, the bill would eliminate several provisions sought by House Democratic liberals that critics say attempted to portray all service members as conservative extremists, despite the administration’s December 2021 report that concluded less than .005% of troops are linked to far-right groups or incidents. Another provision killed in the final bill would have mandated military training on extremism for retiring troops, based on the allegation that military members are predisposed to extremism.

And on climate change, the final bill dropped House Democrats’ efforts to require the Pentagon to reduce emissions and to make climate change a priority.