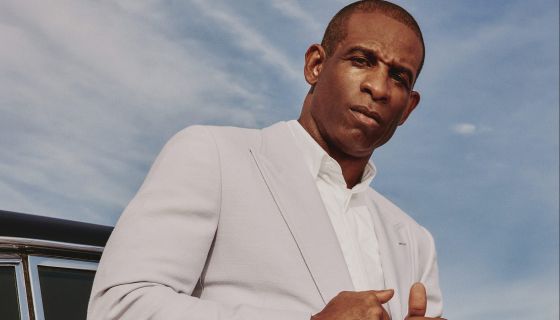 Deion Sanders has been the topic of conversation for decades. The second he was drafted to the Atlanta Falcons covered in gold with his Jheri curl that was “dry but it looked wet” the game changed. Swagger, Flavor, Drip, or whatever you call it had officially landed in the NFL. Primetime forever changed football but now he’s changing it again as Coach Prime. After departing Jackson State with a winning record as head coach he is elevating his employment to Colorado as the school’s new head coach. GQ rolled out their inaugural Style Hall of Fame issue and who better to cover it than Coach Prime f/k/a PRIMETIME?

Coach Prime is the on the latest cover of GQ, for its inaugural Sports Hall of Fame issue. In the GQ issue, Deion talks about attention something that has been on him since a teenager and reflects on the creation of Primetime and his fashion.

“That was just me doing me,” he said when asked about his fashion choices back then. “Never had no stylist.” He was always pushing the envelope of the dress code. “But I never went against what was right,” he said. “I would always walk right up to the line because it was making a statement as well.”

When talking about the difference between Neon Deion and Primetime as opposed to Coach Prime Deion gives credit to social media. Many think what Deion did on social media with Jackson State is new, but he’s been doing this.

“You got to understand, when I was playing, there was no social media,” explained Sanders. “So whatever story they wrote, that’s what it was. Now you have an opportunity to be definitive, to explain yourself, to be transparent, and as you.”

Perhaps the standout quote of the GQ profile comes from his friend and Georgia pastor E. Dewey Smith Jr and not Deion himself. Pastor Smith describes a visit with Deion last winter while he was at Jackson State. Smith could see the challenges he faced behind the scenes weighing on Deion. Perhaps his quote could bring peace to those who for whatever reason are upset Sanders left Jackson State.

“He felt like he was carrying a load,” recalled Smith. “He had a desire to do things that really impact the students in the most significant way. But there were some serious resource challenges. I saw him struggling.”

Smith has a new nickname for Sanders “Nehemiah,”.  Named after the biblical figure who rebuilt Jerusalem after it was destroyed by the Babylonians under Nebuchadnezzar II. The latest issue of GQ covered by Coach Prime arrives on newsstands on January 31st.

You can read the profile online now by clicking here.