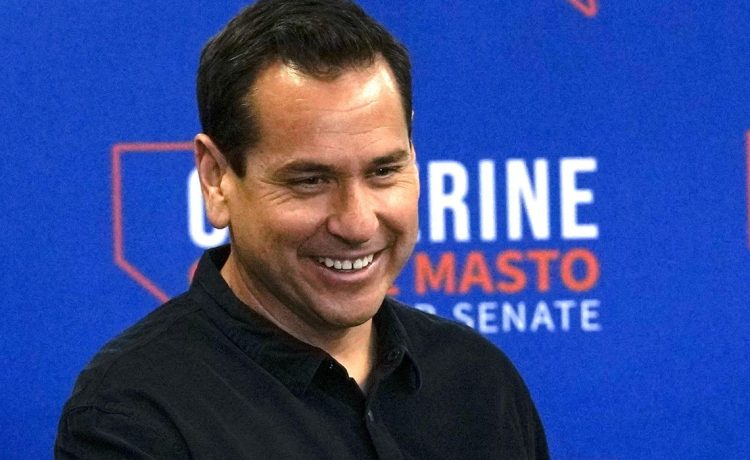 RENO, Nev. (AP) — Democrat Cisco Aguilar was elected as Nevada’s secretary of state, winning the elections post over Republican Jim Marchant, who pushed to scrap voting machines and claimed all Nevada winners since 2006 have been “installed by the deep-state cabal.”

Marchant’s loss marks the latest defeat for election conspiracy theorists who sought to gain control of elections in competitive states. Marchant organized a coalition of 17 such Republican candidates for the 2022 election, and all lost their races except two – Diego Morales, who was elected secretary of state in Indiana, and Kari Lake, whose contest for Arizona governor remained too close to call.

Marchant, Mark Finchem – an Arizona state lawmaker who attended the Jan. 6 protests – and Michigan’s Kristina Karamo were the most prominent secretary of state candidates because they sought the office overseeing voting in three of the six swing states that decided the winner of the 2020 presidential elections. Their bids drew millions of dollars in outside spending from Democrats and their allies on ads warning voters about them. In contrast, the Republican Party’s apparatus that normally backs secretaries of states didn’t support any election conspiracy theorists and they raised paltry sums of money.

“Their candidates showed voters who they were and the voters rejected them,” said Ellen Kurz, a Democratic strategist whose group iVote spent $15 million against the conspiracy theorists. “Voters saved democracy.”

In Nevada, Aguilar has vowed to add protections for poll workers and to restore public trust in elections that was damaged by false claims of voter fraud, including by his election-denying opponent. He will replace Barbara Cegavske, the only current statewide-elected Republican and one of the GOP’s most vocal critics of conspiracy theories that have fueled unfounded distrust in voting machines.

“We must continue to reject extremism and those who threaten our democracy,” Aguilar, the first Latino elected to the role, said in a campaign statement declaring victory Friday.

Marchant lost even as the GOP candidate for governor won, part of a pattern of election deniers running behind the rest of their ticket, including in Minnesota, New Mexico and Pennsylvania.

Cegavske has overseen elections in Nevada since 2014 and has repeatedly upheld the results as reliable and accurate despite attacks from former President Donald Trump and other Republicans – which led the state party to censure her. Her investigation found no credible evidence of widespread voter fraud in Nevada in 2020.

Voting has changed in Nevada in the past four years, as the Democratic-controlled Legislature implemented changes in response to the COVID-19 pandemic, including sending mail ballots to every voter, which was made permanent.

Aguilar said in an interview in early November that one of his first priorities in office will be to make it a felony to harass election workers and volunteers.

Marchant, a former state assemblyman and congressional candidate, was not the only Republican election denier on the ballot in Nevada. U.S. Senate candidate Adam Laxalt co-chaired Trump’s reelection campaign in Nevada and led failed court challenges to overturn the state’s 2020 results. Laxalt lost to Democratic Sen. Catherine Cortez Masto, who won election to a second term on Saturday.

Like many election conspiracy theorists, Marchant eschewed the trappings of a typical campaign, holding few public events open to reporters. Marchant and his fellow deniers were supported by deep-pocketed businessmen who spent tens of millions of dollars on grassroots groups, documentary-style movies and other media pushing the theory that the 2020 election was stolen from Trump.

“These guys have this infrastructure, which is how they communicate and they didn’t think they needed a campaign structure,” said Kim Rogers, executive director of the Democratic Associated of Secretaries of State, which spent heavily against Marchant and other denier candidates.

Aguilar said he would respect “local decisions” if counties present him with plans to hand-count ballots, while also making sure the process is lawful. He said a large part of his job will be rebuilding trust in elections.

Riccardi reported from Las Vegas. Stern is a corps member for the Associated Press/Report for America Statehouse News Initiative. Report for America is a nonprofit national service program that places journalists in local newsrooms to report on undercovered issues.