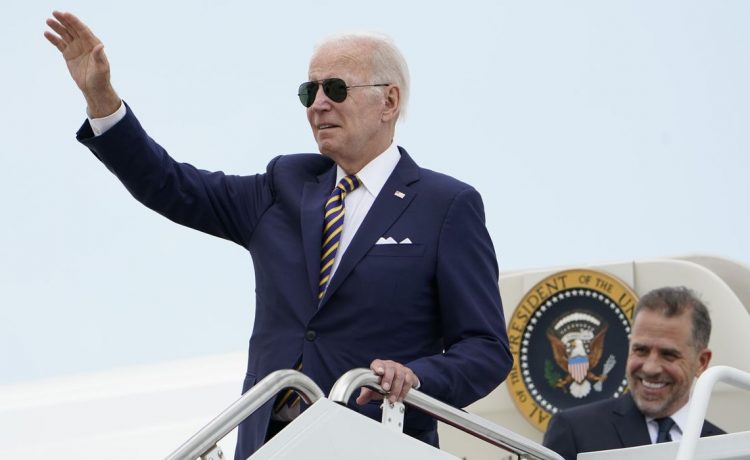 ROCKVILLE, Md. — Maryland Democrats gathered for an appearance here Thursday by President Biden said they’re optimistic about their leader’s recent successes and the possibility of an eleventh-hour election-year turnaround for their party with midterms less than three months away.

Voters credited Mr. Biden’s pragmatic ability to pass legislation on climate, taxes, and health care through Congress, as well as the president delivering on a bill aimed at shoring up chip manufacturing in the United States to better compete with China.

More recently, supporters celebrated his announcement that the administration plans to cancel up to $10,000 in student debt for borrowers earning less than $125,000 a year and up to $20,000 in debt for Pell Grant recipients.

“I’ve been very happy with his job performance, especially recently,” said Teresa Bennett of Montgomery County. “If you look at what the president and Democrats have accomplished from the Inflation Reduction Act to CHIPS, and having the biggest investment on climate change ever, these are things they ran on.”

Mr. Biden spoke to a few thousand supporters at Richard Montgomery High School in Rockville, Maryland on Thursday to stump for his party ahead of the midterms.

The Democratic National Committee-hosted event comes as the president seems to be bouncing back from months of low poll numbers that have plagued Mr. Biden’s presidency.

A Reuters/Ipsos poll from this week found 41% of Americans approve of Mr. Biden’s job performance, marking the first time since early June he received over 40%. Then, a new Gallup poll released Thursday had Mr. Biden’s job approval up to 44%.

In May, June and July, with gas prices surging and inflation raging, those approval numbers had slumped down into the mid-30s.

Supporters say the improvement shows Democrats are building on the momentum from legislative gains in Washington to the party’s surprisingly strong poll numbers from contested Senate races across the country.

“I don’t think that his approval rating as it stands today is at all reflective of what he’s done. And you know, frankly, I don’t actually buy it,” said Morgan Murphy of Rockville. “There’s always something to brag about somewhere, and without question, he has delivered for Maryland.”

Several voters cited abortion as a top issue heading into the midterms after the Supreme Court overturned Roe v. Wade earlier this year.

Democrats have sought to put abortion rights front and center this fall, with the expectation that the issue will turn out suburban women and independent voters by painting the GOP as anti-women and extremist.

Claire Sachs, a Democratic activist from Silver Spring, said keeping Democrats in control of the House and flipping more Senate seats is critical to ensure protections for abortion access.

Ms. Bennett predicted abortion would be the dominant issue in the midterms — a development that could break the “red wave” many had predicted for GOP House and Senate hopefuls this November.

“With Roe v. Wade being overturned, I’m hoping that’s really energizing Democrats and independent women to say wait a minute, these culture warriors on the Republican side who screen for freedom and liberty are actually the ones who are taking away freedom and liberty,” Ms. Bennett said.

Republicans need a net gain of just five seats to flip the House.

Democratic strategist Brad Bannon said Mr. Biden is likely to make more campaign stops ahead of the midterms that will also be a point to tout his own agenda.

“He is going to be selling himself, Democratic candidates, and the Inflation Reduction Act,” Mr. Bannon said. “We’re likely to see campaign trips disguised as rallies for the bill.”

Not everyone was impressed by Mr. Biden’s performance since he took office.

The president was met with a few protesters outside of his event, with signs that read “Let’s Go Brandon,” an anti-Biden slogan aligned with Trump supporters.

The Republican National Committee noted that the president was taking a victory lap in front of the particularly uncritical voters of liberal Montgomery County, Maryland.

“In typical Biden fashion, instead of fixing the multiple crises he created, he comes back from weeks of vacation only to hobnob with liberal elites inside the Beltway. If only Biden was as focused on serving hardworking Americans and families as he was on planning his vacations,” said RNC spokeswoman Emma Vaughn.

One supporter said she also wants to see the president move further on student loan forgiveness, despite his latest action.

The Harford County, Maryland, woman, who has several degrees, has $200,000 in student debt she is working on paying back.

Others still say Mr. Biden still has time, especially with the recent successes, to give his party a boost this November.

“He’s doing better than expected, and the recent developments have helped him, and the change to this election could be the issue of abortion,” said Steven Van Grack, the former mayor of Rockville who attended Mr. Biden’s speech. “That [issue] gives Democrats the potential to make the difference in both the Senate and the House.”