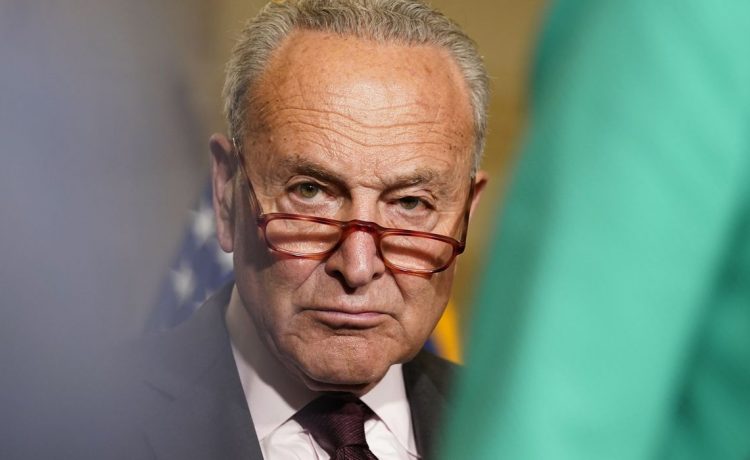 Democratic leaders on Capitol Hill are refusing to give in to intra-party squabbling over an energy deal with one of the party’s most moderate members: Sen. Joe Manchin III.

Senate Majority Leader Charles E. Schumer was adamant Tuesday that he will not diverge from plans to attach legislation by the West Virginia Democrat that would fast-track energy projects to a stopgap funding measure to keep the government open past Sept. 30, rebuffing threats from dozens of climate hawks threatening a shutdown if they don’t get their way.

Mr. Manchin’s energy-permitting reform was the price Democratic leaders paid in order to secure his vital support for the party’s tax-and-climate spending law.

“The permitting agreement is part of the … agreement,” Mr. Schumer said. “I’m going to add it to the [government funding bill], and it will pass.”

President Biden, speaking at a White House event lauding the tax and climate law, gave a personal shoutout to Mr. Manchin for holding true to his side of the deal.

“Joe, thanks for sticking with what you said you’d do. Appreciate it,” the president said.

Still, at least 77 House Democrats as of Tuesday were part of a growing list who vowed to reject such a package. They’ve warned of a potential federal government shutdown, a move that would damage the party’s standing with voters just weeks before the November midterms.

“I encourage leadership to listen to its caucus and keep us out of a shutdown standoff that nobody wants,” said Rep. Raul Grijalva, Arizona Democrat and House Natural Resources Committee chairman.

“Now is not the time to roll the dice on a government shutdown,” he said.

Sen. Bernie Sanders of Vermont, a socialist who caucuses with Democrats, is also lobbying Democrats against the proposal.

Mr. Manchin’s proposal and the stopgap funding measure have not yet been released but are expected to move through the Senate first, a tactic that would offer Democratic leadership increased leverage over its members to fall in line.

Mr. Manchin is seeking to streamline how both clean-energy and fossil-fuel projects are approved, require more oil and natural-gas drilling on federal lands and water, and greenlight the stalled Mountain Valley natural-gas pipeline in West Virginia worth $6.6 billion.

Democratic opponents and environmentalists argue it would boost fossil fuel projects for decades to come, undercutting the $370 billion in clean energy spending in their tax and climate law.

Adding another hurdle into the mix, Democrats must secure at least 10 Senate Republicans for it to pass. GOP senators already unveiled an energy-permit proposal of their own amid frustration they’ve been excluded from the negotiating table.

While Republicans and the industry have called for such energy reforms for decades, GOP Senate leaders have suggested there is very limited willingness to back Mr. Manchin’s legislation.

Republicans want a “clean” stopgap funding bill that would only include additional Ukraine aid. Democratic leaders and the White House are pushing to tack on more money for coronavirus, monkeypox and natural disasters, in addition to Ukraine aid and Mr. Manchin’s energy plan.

“We have Joe Manchin, who’s trying to hide behind a fig leaf of an agreement he made with Chuck Schumer about trying to cut a little bit of red tape,” said Sen. John Barrasso of Wyoming, the Republican Conference chairman. “If you’re now looking for Republicans to support and give you more cover than you have right now, you’re not going to find it with us.”