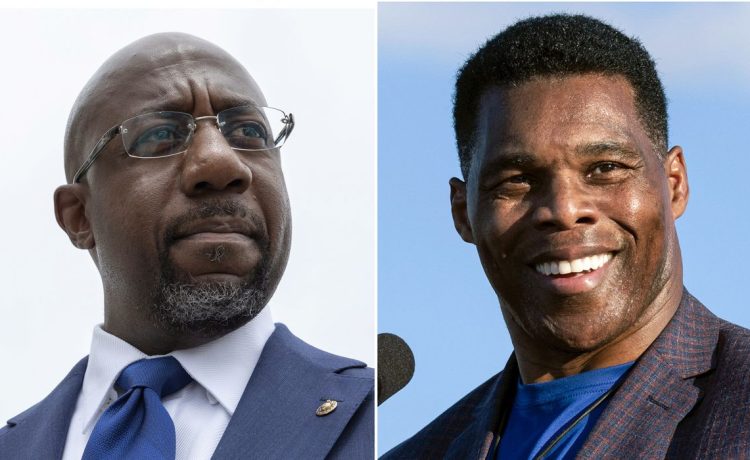 A ruling that will allow Democrat-heavy counties to begin early voting on Saturday in the Georgia Senate runoff is poised to deliver an advantage to incumbent Raphael Warnock and set another hurdle for Republican Herschel Walker, who must find a way to motivate tepid GOP voters to show up for him on Dec. 6.

While the race is considered a toss-up, Mr. Walker is seen as the underdog after not only failing to win more than 50% of the vote in the Nov. 8 general election but also underperforming Republican Gov. Brian Kemp, who won reelection outright by beating Democratic challenger Stacey Abrams by 7 points.

Neither Mr. Warnock nor Mr. Walker topped 50% in the midterm election, falling short of the support needed to avoid a runoff. Mr. Walker finished behind Mr. Warnock by about 35,000 votes out of more than 4 million votes cast.

Both parties are eager to claim the seat. While Democrats held on to the Senate majority in the midterm elections, the runoff gives the party a chance to increase their ranks to 51, although their power to get legislation to President Biden’s desk will be blunted by a new GOP majority in the House.

Republicans are aiming to keep the Senate evenly split with a Walker victory, although the tie-breaking vote of Vice President Kamal Harris ensures Democrats have control of the gavel.

An appeals court delivered a blow to the Walker campaign on Nov. 21, rejecting efforts by state election officials to block early voting from taking place on the Saturday after Thanksgiving.

Democratic Party and Warnock campaign lawyers fought in court for the polls to be opened on Saturday, despite a law Republicans say prohibits it, and now that they have won that right. It is expected to give an additional boost to Mr. Warnock.

While the ruling opened up Saturday voting for any Georgia county, the state GOP hasn’t organized it in any of their strongholds, and so far, only Democratic-heavy areas in major Georgia cities, including Atlanta, have plans in place to open the polls on Saturday.

“This poses additional challenges to Republicans who instead should have been pushing for all 160 counties to offer Saturday voting,” Georgia pollster Matt Towery, said.

Republican counties, Mr. Towery said, “tend to be smaller and can’t gear up on short notice,” for voting to begin on Saturday in light of the ruling.
It only adds to Mr. Walker’s challenges in his bid to unseat Mr. Warnock, who has essentially been campaigning since 2020 and has established himself as a capable incumbent.

Mr. Warnock, 53, a senior pastor at Atlanta’s Ebenezer Baptist Church, won the Senate seat in a January 2021 runoff election to fill the term left vacant by the late Johnny Isakson.

Democrats have worked to define Mr. Walker, 60, a former college football star and NFL player, as ill-equipped and unprepared to handle the job of a senator. He’s also been dogged by accusations from former girlfriends that he paid for and encouraged them to have abortions, claims that have damaged his credibility as a pro-life candidate and family man.

Celebrity lawyer Gloria Allred, who represents one of the women, staged a press conference Tuesday to rebut denials by Mr. Walker that he pressured the woman into getting an abortion three decades ago while he was married and the two were having an affair.

Mr. Walker has said he does not know the woman, and the unnamed accuser on Tuesday dared Mr. Walker to meet with her in person.
Jessica Taylor, a Cook Political Report editor who tracks Senate races, said Mr. Walker’s sub-par performance on Nov. 8 could also drag him down in the runoff.

A new AARP poll shows Mr. Warnock leading Mr. Warner by 4 points, although the lead is within the margin of error.

Among the critical, independent bloc of voters, Mr. Warnock was ahead by 15 points, the poll showed.

“That’s very substantial,” Ms. Taylor said. “And those are the voters that decide elections in close states like Georgia.”

The runoff has attracted truckloads of campaign cash into the state and according to early figures, Mr. Warnock is outspending Mr. Walker.
Mr. Warnock and groups supporting him have so far spent $16.9 million on advertising, according to the tracking firm AdImpact, NBC News reported.

Mr. Walker and GOP groups by comparison have only spent $5.4 million on advertising.

Republicans are poised to catch up. The Senate Leadership Fund, which is the super PAC aligned with Senate Republican leader Mitch McConnell of Kentucky, has pledged to spend $14.2 million to help defeat Mr. Warnock.

Mr. Walker may also benefit from Mr. Kemp’s new involvement in the race.

While Mr. Kemp kept Mr. Walker at a distance while he was running for governor, he is now actively working to help Mr. Walker win the runoff, dedicating his successful reelection campaign team to the effort.

Ms. Taylor said Mr. Kemp’s involvement could help, but it’s not clear how significant a role it will play in getting voters to turn out for Mr. Walker when he was unable to win anywhere near the level of support when lined up alongside other statewide GOP candidates on the Nov. 8 ballot.

“The blinking red light for me is how much he underperformed those other Republicans,” Ms. Taylor said. “And when he is the only Republican on the ballot, are those people going to come back out?”