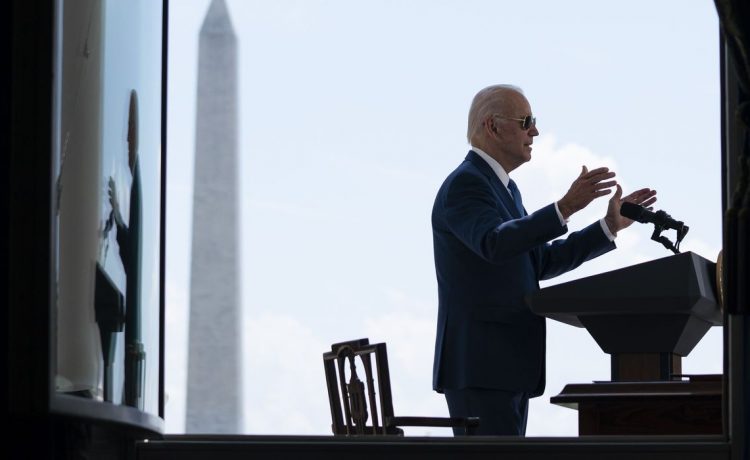 President Biden is on a roll for a commander-in-chief with historically low approval ratings, scoring a string of legislative and foreign policy wins that are giving Democrats fresh hope of avoiding a drubbing in the November midterms.

Mr. Biden has been able to pass a slew of significant bills through the evenly divided Senate with overwhelmingly bipartisan support. He also finally secured the backing of longtime holdout Sen. Joe Manchin III, West Virginia Democrat, to support his climate and spending bill, a measure that is on track to be passed in the coming days.

The past week was perhaps Mr. Biden’s most successful as president, starting with the killing of the world’s most wanted terrorist and ending with the unemployment falling to its lowest level in 50 years.

In between, Mr. Biden celebrated Sen. Krysten Sinema, Arizona Democrat and another crucial holdout vote, finally endorsing his spending bill; gas prices hitting a 50-day low, and voters in red-state Kansas giving Democrats hope in the midterms by overwhelmingly rejecting an amendment that would ban most abortions.

“For anyone that doubted whether Joe Biden’s policies or approach to governing works, this week is further proof about his ability to lead in the times of crisis,” said Democratic strategist Antjuwan Seawright. “Poll numbers don’t reflect his ability to govern.”

The victories are a much-needed lifeline for Mr. Biden and the Democrats. Political analysts have been forecasting that Democrats will lose both the House and the Senate in the fall midterms.

And Mr. Biden’s own popularity has been fading. A New York Times/Siena College released last month found that 64% of Democrats want someone other than Mr. Biden to be the party’s nominee in 2024, while a CNN poll put that figure as high as 75%.

Things had been looking abysmal for the president. In addition to low poll numbers within his own party, he was criticized for his slow response to the Supreme Court ruling overturning Roe v. Wade; his climate bill was dead in the water, and he tested positive a second time for COVID-19.

Mr. Seawright said the recent string of victories is a game changer for the midterms, which are now less than 100 days away.

“For all those who predicted doom and gloom, what’s their prediction now? What are they saying now with 54 days of dropping gas prices and a strong economic jobs report?” he said.

Republicans say Mr. Biden and the Democrats have too many hurdles to overcome for one good week to make a difference. They note that inflation is still at its highest level in 40 years, gas prices are still well above where they were last year, and Mr. Biden’s approval rating is still mired in the low 40s.

“Prices are still unbelievably high, products still cost more, and families are still struggling to pay for food and gas. Just because Biden is having a good week doesn’t mean that’s coming to an end,” said James Keady, a GOP strategist.

While Mr. Biden’s reversal of fortune has created some momentum for Democrats heading into the midterms, political watchers wonder how long it will last. The president’s winning streak occurred in early August, a time when many voters are on vacation and not paying attention. Political forecasters also caution that it’s hard to predict three months into the future based on one good week.

“There are ebbs and flows and every administration,” said Stephen Medvic, professor of politics and government at Franklin & Marshall College. “I think this can help Democrats avoid a worst-case scenario of losing 40 to 60 [House] seats, but historically the president’s party always does terribly in the midterms. It might make things less bad.”

Ironically, Mr. Biden is racking up victories while sidelined with COVID-19. He made few public appearances last week while isolating in the White House after seven straight days of positive tests.

Perhaps Mr. Biden’s biggest victory came on Friday with one of the best jobs reports of his presidency.  Employers added 528,000 jobs in July, more than double the prediction of Wall Street analysts.

The overall unemployment rate fell to 3.5%, the Labor Department said.

The strong report helps Mr. Biden argue that the overall economy remains healthy despite two consecutive quarters of negative GDP growth, which has spurred Republican criticism that the U.S. entered a recession.

But it wasn’t Mr. Biden’s only good fortune last week.

Last Monday, Mr. Biden announced that the U.S. killed Ayman al-Zawahri, one of the masterminds of the Sept. 11, 2001 terror attacks, who had eluded capture for over 20 years. al-Zawahri was killed by a CIA drone strike while standing on a balcony in Kabul, Afghanistan.

Not only did the successful operation put Republicans in the awkward position of crediting Mr. Biden, but it also gave the president a victory to justify his strategy of combating terror threats without U.S. boots on the ground. It simultaneously gave him a talking point to push back against criticism for last year’s bungled withdrawal from Afghanistan.

“This is a massive thing that Republicans and Democrats on both sides of the aisle should be cheering,” Mr. Keady said. “But also you have to remember there have been massive foreign policy failures by this administration in Afghanistan and elsewhere. So does this one victory make up for those string of failures?”

Also in the past week, gas prices have hit their lowest levels in about eight weeks, falling to an average price of $4.11 per gallon, down more than 70 cents per gallon since the beginning of July, according to AAA, the automobile group.

The administration has celebrated more than 50 straight days of lowering gas prices.

But energy prices are volatile. Some energy analysts fret that gas prices could surge again in October. J. P. Morgan and other analysts have warned that Russia could shut down its gas supply altogether in retaliation for stricter sanctions slapped on Moscow because of the war in Ukraine.

It’s still possible that the worst-case scenario is avoided, but some Democrats remain on edge.

On Wednesday, voters in Kansas overwhelmingly rejected an amendment that would have allowed the state legislature to ban abortions. The convincing victory for abortion rights activists could mobilize voters to support pro-choice candidates in the fall. Turnout in the Kansas primary was up nearly 60% from the last primary in 2018.

“The vote in Kansas does suggest that the country, even in conservative areas, are not as ideological as many want them to be,” said Robert Rowland, who teaches presidential rhetoric at the University of Kansas. “That does provide some opening for Biden because it can save a candidate when their opponents overreach too far.”

Mr. Keady says claims that the Kansas vote could be a bellwether for the midterms are overblown.

“Americans are not one-issue voters,” he said. “The abortion referendum is a one-issue microcosm vote. Americans are still going to have to make a decision on gas prices, leadership, and if they are better off now than they were a year and a half ago.”

Mr. Biden scored another victory Thursday when Ms. Sinema endorsed his domestic agenda after reaching a deal with party leaders. The agreement gives Democrats the likely 50 votes to push Mr. Biden’s climate and spending bill through the Senate.

The bill, dubbed the Inflation Reduction Act, is a scaled-back version of Mr. Biden’s Build Back Better package, which had stalled for over a year amid opposition from Ms. Sinema and Mr. Manchin.

Mr. Manchin announced last week that he would also back the president’s plan, kicking off Mr. Biden’s winning streak.

“It is a tremendous opportunity for us in the fall,” said Mr. Seawright. “People are going to feel it when gas prices go down and when unemployment goes down.”

Also in the past week, two measures championed by Mr. Biden passed the Senate by decisive bipartisan margins. Senators voted to approve expanding the North Atlantic Treaty Organization with the addition of Finland and Sweden by a 95-to-1 vote, while another measure to aid veterans exposed to toxic burn pits passed 86-to-11.

Those legislative victories come on the heels of two other bipartisan wins for Mr. Biden in the Senate within the past few weeks. The Senate in June passed his gun safety bill by a 65-to-33 vote, and a bill that would invest billions in domestic semiconductor manufacturing cleared the Senate last week, 64-to-33.