Democrats shelve climate change talk on the campaign trail, hone in on abortion 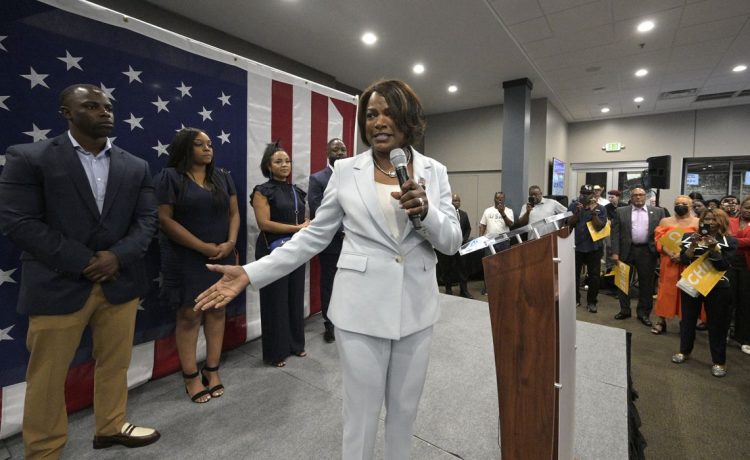 Democrats running in House and Senate races have ditched talk about climate change and green energy policies as voters signal the economy, high gas and heating prices, illegal immigration and abortion will influence them the most at the ballot box on Nov. 8.

Climate change has long been a top issue among the base of Democratic votes as well as a smaller but significant number of independents. Democrats campaigning ahead of the midterms could be promoting the $700 billion climate and tax increase bill recently signed into law by President Biden that’s aimed at curbing carbon emissions through massive spending on green energy projects.

But climate change is all but cast aside by voters. Democratic candidates are instead facing voters struggling to pay for groceries and gas, or worried about abortion access.

A Monmouth University poll this week showed climate change among one of the three least important issues — along with COVID-19 and student loan debt — although 49% still considered it “extremely or very important.”

The number of respondents who said climate change was “not important” for the federal government to address doubled from 16% in January 2021, when President Biden took office, to 32% in the Monmouth poll released in October.

However, a new issue has crept up the list: Abortion.

“It does feel as though climate has lost the limelight this midterm to Roe, which is a shame,” Democratic strategist Christy Setzer said, referring to the Supreme Court decision in June that ended the nationwide legal right to an abortion.

Climate change, Ms. Setzer said, “is often a key factor in younger voters’ enthusiasm for candidates and a first step into civic engagement.”

The Monmouth poll of 806 adults, most of them registered voters, found inflation (82%), crime (72%) and elections and voting (70%), topped the list of concerns.

But 56% of respondents in the Monmouth poll also indicated abortion was “extremely or very important.” Other recent surveys show a similar trend.

A Saint Anselm College poll conducted on Sept. 27 and 28  found abortion ranked third behind the economy and inflation among registered voters, rising from 12% to 20%  since August among those who called it a top issue.

While the party has struggled to deflect blame for inflation, high gas parties and the surge of illegal immigrants across the southern border, they are going after Republicans on abortion, which has animated the Democrats’ base since the high court overturned Roe v. Wade.

Democrats are spending tens of millions of dollars on ads across the country, not touting their climate change legislation, but instead hammering Republicans on abortion and painting the party as extreme, punitive and a threat to reproductive rights.

In Florida, where the environment often ranks as a top concern among residents, Democrat Val Demings isn’t campaigning on climate change or the green energy and tax increase package she helped pass this summer in Congress. In her bid to unseat Republican incumbent Sen. Marco Rubio, Mrs. Demings is promoting her support for abortion access and her law and order platform.

In one ad, she combines the two.

“As a police officer, some of the worse cases I worked were sexual assaults,” Mrs. Demings says in the ad. “Marco Rubio wants to criminalize abortions with no exceptions for victims of rape or incest.”

Mrs. Demings and Democrats are watching polls like the Spectrum News/Siena College survey that found only 1 in 4 likely Sunshine State voters ranked climate change among their top three most important issues. While half of younger voters aged 18-34 listed climate change among their top three concerns, those young voters are historically less likely to show up and vote.

Sen. Michael Bennet, a Colorado Democrat up for reelection in a state where voters have long prioritized the environment, tied the economy and climate together in a recent ad touting new solar panel manufacturing.

But climate by itself just isn’t a winning issue for on-the-fence voters this cycle amid economic woes and the abortion debate, and Democrats know it, said Hank Sheinkopf, a Democratic strategist.

For one thing, when asked about Joe Biden’s handling of climate change, voters mostly disapprove, the Monmouth poll found.

“There’s a clash in discussions between the economy and climate issues,” Mr. Sheinkopf said. “It’s best for people who want to hold onto seats or win seats not to confuse the two. The economy is a problem for an awful lot of people, inflation is a problem. You throw climate on top of that, it’s kind of a soufflé [Republicans] can really put a fork into this fall.”

Despite the polls, climate activist groups are not abandoning the midterms.

A coalition of eight Senate Democrats, none of them running for re-election, has reignited a longtime push for Mr. Biden to declare an official climate emergency to unlock more executive powers aimed at curbing carbon emissions.

The climate hawks argued in a letter Tuesday it would turn their tax-and-climate-spending law into the start of an “ambitious climate agenda, not the end of it.”

These Senate Democrats ranked climate change among “the biggest emergencies that our country has ever faced.” They urged Mr. Biden to “act boldly, declare this crisis the national emergency that it is, and embark upon significant regulatory and administrative action.”