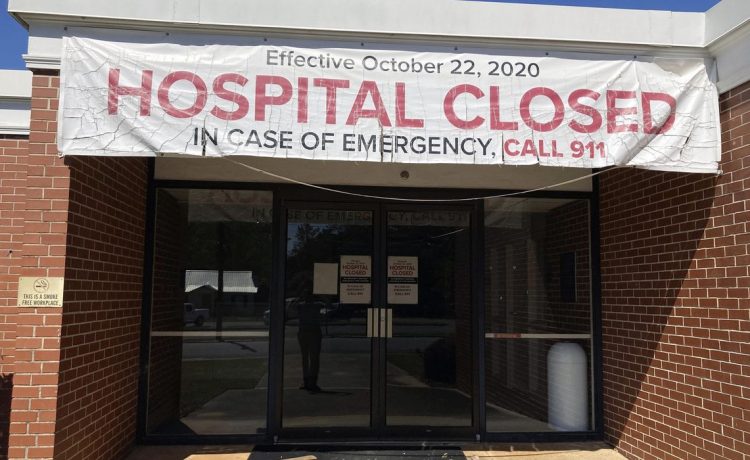 ARLINGTON, Ga. (AP) — Nine years after the hospital closed in the southwest Georgia town of Arlington, the worry about health care lurks. Health insurance premiums are high, many residents report poor health and there’s no guarantee Calhoun County’s sole ambulance will arrive promptly if it’s taking a patient to a distant hospital.

“If it’s out on a call, you might as well throw them in the truck then and try to get somewhere,” said resident Sam Robinson.

Democrats, including their nominee for governor, Stacey Abrams, are showcasing those problems as they run for office this year, pushing for Georgia to join 38 other states in expanding the Medicaid health insurance program to cover all able-bodied adults.

Abrams opened her campaign to unseat Republican Brian Kemp at a hospital that closed in nearby Cuthbert, underlining an issue that was a centerpiece of her narrow loss to Kemp in 2018.

“We’re talking about someone who goes in for a checkup and is told that they have stage one pancreatic cancer,” Abrams told reporters in a video news conference this month. “In Georgia, they are not entitled to a follow-up visit unless they can pay out of pocket.”

Experts project more than 450,000 uninsured Georgians would gain coverage if Medicaid were broadened. Many do not usually qualify for subsidies to buy individual policies, leaving them in what experts call the “coverage gap.”

Medicaid expansion is also an issue elsewhere this year.

In South Dakota, voters will decide a referendum on expansion that is opposed by Republican Gov. Kristi Noem. In Kansas and Wisconsin, Democratic governors are seeking reelection after failing to persuade Republican legislatures to broaden coverage.

In Georgia, Kemp has refused calls for expansion, instead proposing coverage for a smaller group of people who meet work, education or volunteering requirements. In an Oct. 11 letter to Georgia’s Democratic members of Congress, Kemp called full Medicaid expansion as “failed one-size-fit-none” policy.

But that refusal stings in Arlington, once home to the 25-bed Calhoun Memorial Hospital. It had been decades since babies were delivered at Calhoun Memorial and the facility struggled to afford the newest technologies. Although services were limited, local residents relied on it for emergencies.

“I used the emergency room with my son,” said Pam Conner. “He was like 4 years old when he got his first very first wasp sting. It put him into anaphylaxis. I don’t know what we would have done without a hospital.”

Conner chairs the county hospital board, nine years after the facility closed and laid off 99 employees. With many uninsured patients, Conner said the hospital was providing more than $2 million yearly in uncompensated care when it shut down.

The county government borrowed for a new roof in 2008, and it’s a sore point locally that taxpayers still owe nearly $500,000 on the building, now leased to a drug and alcohol rehabilitation facility. Local officials declined to raise property taxes to cover hospital deficits, unlike some Georgia counties. The hospital sold its nursing home, raising money but darkening long-term financial prospects. Finally, officials decided to close, joining eight other rural hospitals in Georgia since 2008.

Now, Arlington residents rely on the county’s one ambulance, based 12 miles away in Morgan. Calhoun County projects it will spend $537,000 to provide emergency medical services this year, more than one-eighth of its $4.2 million budget.

Health care problems run deeper in southwest Georgia, though. Private health insurance is so expensive that Conner, whose family owns an insurance agency, instead buys coverage through the federal health insurance marketplace. Robinson said he and his wife once paid a combined $1,000 a month for insurance.

Kemp has succeeded in reducing insurance rates and encouraging more insurers to offer coverage outside metro Atlanta with subsidies. But premiums remain high in southwest Georgia, with one large hospital in Albany dominating the market and residents often in poor health. Calhoun County has high rates of diabetes, obesity and births by teenagers, according to data from County Health Rankings. Black residents are much more likely to have preventable hospitals stays.

Sherrell Byrd of SOWEGA Rising, which tries to improve well-being in southwest Georgia, said COVID-19 highlighted the region’s poor health and rickety health care system. In early 2020, southwest Georgia drew national attention with one of the highest death rates from the respiratory virus.

“It really exposed how bad our health is,” Byrd said. “We had so many comorbidities here.”

Medicaid has also flared as an issue in Atlanta, where the WellStar system closed a hospital in suburban East Point and will by Nov. 1 close the 532-bed Atlanta Medical Center. That’s one of only five top-level trauma centers in Georgia. WellStar says Atlanta Medical Center was losing so much money that Medicaid expansion wouldn’t have helped, but Democrats persist in saying it could have made a difference over the long term.

Having states provide Medicaid coverage to residents with incomes of up to 138% of the federal poverty line was envisioned in President Barack Obama’s 2010 health care overhaul. But the U.S. Supreme Court ruled in 2012 that the federal government could not force states to act, and many Republican-led states balked.

President Joe Biden’s administration has been trying to block Kemp’s plan for a partial Medicaid expansion, but a judge in August ruled Georgia could proceed with the work requirement. Kemp calls his approach a “far better approach to increasing health care coverage than ‘full’ Medicaid expansion.”

Kemp notes Medicaid expansion would force some people now eligible for private health insurance subsidies onto Medicaid. Because Georgia has set low Medicaid payments and some doctors don’t take Medicaid, Kemp argues that would leave those people worse off while increasing competition for current Medicaid patients to find a doctor.

The governor also notes 600,000 more Georgians are on Medicaid now than when he took office, basically arguing Medicaid expansion has already happened. Many people, however, are covered because the federal government has blocked states from dropping people from Medicaid during the COVID-19 pandemic. They could be removed once the federal public health emergency ends.

Democratic Sen. Raphael Warnock has tried to sweeten the deal, enticing lawmakers last year to boost the federal share of funding from 90% to 95% for the first two years of any new state Medicaid expansion. Warnock, seeking reelection on Nov. 8, has long called for broader coverage. He was arrested during protests over the issue at the Georgia Capitol in 2014 and the U.S. Capitol in 2017 before becoming a senator.

“Unfortunately, the state left that money on the table and left hundreds of thousands of working Georgians in the coverage gap,” Warnock said Oct. 12 in Atlanta. “And I intend to keep fighting for them.”

“Right now, Medicaid has not been good,” he told reporters. “Right now, the expansion is going to continue to bankrupt us. Everyone knows that.”

A key question underlying the debate is to what degree the government is obligated to provide health care and seek improved health outcomes. Democrats now largely believe health care is a human right and collective responsibility. Many Republicans still believe it’s an individual responsibility.

In Arlington, Conner says what actually existed was a mismatch – with hospitals legally required to provide emergency care, but not guaranteed payment.

“It makes me say that universal health care might actually be a right of our citizens,” Conner. “It’s a right for them to go to the emergency room whether they can pay for it or not. But it’s not a right for the hospital to get the money to pay for it.”