Deshaun Watson settles 20 of 24 civil lawsuits filed against him 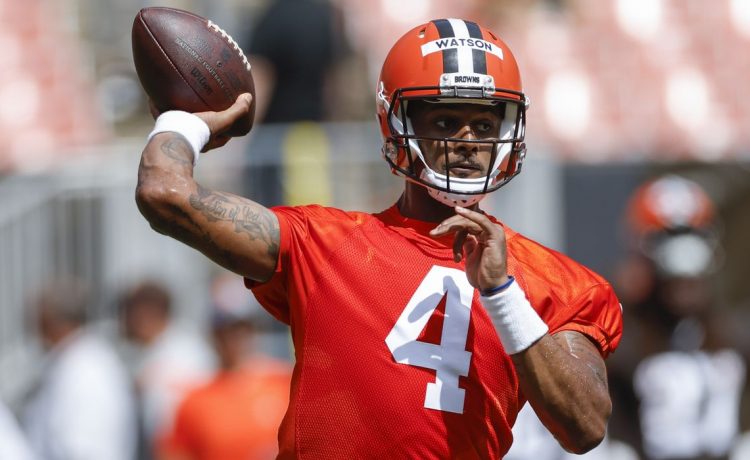 Cleveland Browns quarterback Deshaun Watson settled 20 of the 24 civil lawsuits filed against him, according to attorney Tony Buzbee.

Watson, who didn’t play last season with the Texans and is facing a suspension from the NFL, still has four women suing him for sexual assault and sexual misconduct. Buzbee, the lawyer representing the 24 women, announced the settlements in a statement Tuesday.

“We are working through the paperwork related to those settlements,” Buzbee said in the statement. “Once we have done so, those particular cases will be dismissed. The terms and amounts of the settlements are confidential. We won’t comment further on the settlements or those cases.”

Since March 2021, a total of 25 lawsuits have been filed against Watson for alleged inappropriate behavior during massage sessions. One of them was dropped by the plaintiff, and now 20 have been settled out of court.

One of the four women moving forward with their lawsuits is Ashley Solis, who was the first woman who came forward publicly with an allegation. Watson and his lawyers have denied the allegations.

“Ashley Solis is one of the heroes of this story,” Buzbee said. “Her case has not settled and thus her story and that of the other three brave women will continue. I look forward to trying these cases in due course, consistent with other docket obligations and the court’s schedule.”

In March, the second of two grand juries in Texas declined to indict Watson, who had recently been traded to the Browns and signed a five-year, $230 million fully guaranteed contract with the team.

Tony Buzbee announces in a statement that all but four of the civil lawsuits against #Browns QB Deshaun Watson have been settled pic.twitter.com/Ye3HoQi05h

Earlier this month, The New York Times reported that Watson had booked massage appointments with at least 66 different women during a 17-month period between fall 2019 and spring 2021. Since the controversy surrounding Watson began, it’s been known that he saw a large number of massage therapists, but The New York Times’ number was the highest and most definitive to date.

Despite the decisions from the grand juries and Watson settling the vast majority of the lawsuits out of court, Watson could still face a lengthy suspension from the NFL. The league is investigating whether Watson violated its code of conduct policy.

“Today’s development has no impact on the collectively bargained disciplinary process,” NFL spokesman Brian McCarthy said in a statement Tuesday.