Despite bravado, Russia seen ‘weakened’ by costs of Ukraine campaign 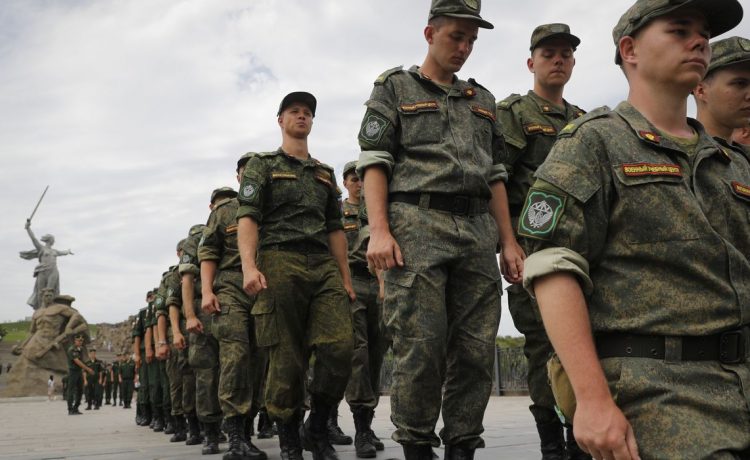 Russia has struggled to meet any of its top strategic goals in the nearly five-month invasion of Ukraine. But the U.S. and its NATO allies may be on the verge of meeting one of theirs.

Fresh estimates this week underscore the depth of damage suffered by Russia’s military so far in its nearly five-month war in Ukraine. The staggering number of casualties and equally stunning amount of vehicles and equipment lost have left the Russian army severely degraded, even as it makes slow, grinding territorial gains in Ukraine’s eastern Donbas region.

That’s not even counting the costs back home, where — despite still-strong energy export revenues — the Russian economy may shrink by a tenth this year, Russian banks, universities and sports teams are cut off from the international arena, and sanctions have led Western suppliers to cut off key commodities and Western retailers to shutter their Russian operations.

Crushing Moscow’s capacity to wage offensive war has been a central component of the West’s game plan since the early days of the conflict. U.S. Defense Secretary Lloyd Austin spelled out that strategy in April when he said flatly that NATO wants “to see Russia weakened to the degree” that it couldn’t launch another invasion for the foreseeable future.

Russians reacted furiously to Mr. Austin’s comment and some Western observers felt he might have gone too far, but that was before the costs of the invasion had come clearly into focus for the Kremlin.

Western officials surely aren’t celebrating, but they’re zeroing in on the long-term damage being done to the Russian military machine with each day the war drags on. Admiral Tony Radakin, the head of the British military, said over the weekend that Russia has suffered about 50,000 casualties so far and has lost roughly 1,700 tanks, in addition to other significant vehicle and equipment losses.

Such widespread death and destruction surely weren’t anticipated by Russian President Vladimir Putin or his military leadership, which by most accounts expected a quick, easy victory with relatively little resistance or bloodshed when their forces crossed into Ukraine Feb. 24.

Instead, Russia may be sustaining permanent damage that will compromise its status as a major military player on the international stage.

“Russia is a more diminished nation than it was at the beginning of February,” Adm. Radakin said, according to British media outlets.

For President Biden, a weakened Russian military represents a big-picture geopolitical success, even as the U.S. and its allies also face strains in the war. But it also opens up the administration to criticism about its long-term plan for U.S. troop deployments in Europe and the Pacific, with some Republicans already saying there’s little need to reinforce NATO’s eastern flank at a time when Russia is so badly wounded.

“Why is Biden sending more troops, planes & ships to Europe instead of the Pacific?” Sen. Marco Rubio, Florida Republican, asked in a Twitter post earlier this month after the White House announced plans to station additional U.S. troops in Europe.

“Russia’s military is in no condition to invade anyone else right now and it’s China & North Korea who are threatening military aggression,” Mr. Rubio said.

Mr. Putin rejects the notion that Russia’s military is becoming a shell of its former self. The losses his country has sustained in Ukraine, he said Monday, won’t affect the country’s long-term trajectory or its spot as a global military powerhouse.

“It is clear that this is a huge challenge for our country, but … we are not going to give up and stay in a state of disarray or, as some of our well-wishers predict, go back decades. Of course not,” the Russian leader said during a video conference with government development officials.

But the numbers suggest otherwise. The 50,000 figure cited by Adm. Radakin is difficult to confirm, but if it’s correct, that would mean that Moscow has lost nearly 6% of its active-duty military personnel in less than five months of combat against an opponent that, on paper, is much weaker militarily. And while Russia has made some gains in southern and eastern Ukraine, progress has been slow and bloody.

The online clearinghouse Globalfirepower.com lists Russia’s active-duty force at about 850,000, with another 250,000 reserve forces and another 250,000 in paramilitary groups such as the Wagner Group.

Such paramilitary forces are now playing a much larger role in Ukraine, according to British military officials, as Russia struggles to replenish its ranks and keep the pressure on the Ukrainian front lines in the Donbas.

In its daily battlefield update, the British Ministry of Defense said Monday that Wagner Group security personnel have played an increasingly prominent part in Russia’s recent conquest of the Luhansk province, one of two provinces making up the Donbas. But the group’s involvement, another signal that Russia is having trouble supplying trained regular army troops for the mission, has come at a price.

“Wagner are lowering recruitment standards, hiring convicts and formerly blacklisted individuals,” British officials said in a Twitter post. “Very limited training is made available to new recruits. This will highly likely impact on the future operational effectiveness of the group and will reduce its value as a prop to the regular Russian forces.”

Indeed, Moscow has relied heavily on the Wagner Group and other paramilitary arms to do its bidding in Syria and in other war zones. Serious damage to the group will dramatically limit the Kremlin’s ability to project power outside its borders without directly using its soldiers, which has become a hallmark of Mr. Putin’s approach to military and foreign policy over the past decade.

The Kremlin also is trying out new tactics to boost the ranks of its enlisted force. While Mr. Putin so far has stopped short of a full-scale draft, specialists say Moscow is mounting a concerted push to find fresh troops to reinforce Russian troops in Ukraine.

“The Kremlin has decided on a two-pronged approach,” Paul Goble, a researcher with the Jamestown Foundation, wrote recently for the organization’s Eurasia Daily Monitor.

“On the one hand, it is radically expanding its efforts to recruit volunteers, mostly in rural areas far from Moscow; on the other, it is calling on the governments of Russia’s predominantly ethnic Russian regions and its non-Russian republics to form battalions that can be dispatched to Ukraine,” he wrote. “The first has not yet proved successful. And the second, now just beginning, is sparking as much concern as hope that it can produce what Moscow wants without issue.”

And while Mr. Putin’s power base is seen as largely unchallenged, the Kremlin appears fearful of the popular backlash it could provoke if its resorts to a major new civilian draft to replenish its force for what officials still refer to as a “special military operation.”

Russia also appears to recognize the potential long-term ramifications of its war in Ukraine. Researchers with the Institute for the Study of War said Sunday that Russia’s Young Army Cadets National Movement has opened 500 new cadet classes and 1,000 junior army classes in Belgorod and other cities near the Ukraine border.

Children as young as 8 can enlist in such programs, but they wouldn’t be eligible for combat for years, suggesting that Russian officials realize they need a long-term plan to avoid a massive manpower shortage down the road.

But manpower is just one of Russia’s challenges. While Russian military leaders have improved their battlefield tactics and limited the damage done by Ukrainian drone and artillery strikes, the amount of vehicles lost will likely take years to replace.

In addition to its massive tank losses, Russia has lost at least 490 armored fighting vehicles, 953 infantry fighting vehicles, 127 armored personnel carriers, 90 command posts and communication stations, 65 surface-to-air missile systems, and a host of other equipment, according to the military blog Oryx, which closely tracks both Russian and Ukrainian losses.

Russia also has reportedly turned to Iran to replenish its fleet of drones, which has seen steep losses in Ukraine.

Already in April on a visit to Kyiv alongside Secretary of State Antony J. Blinken, Mr. Austin said he could see signs of a Russian “weakening” that could curtail Moscow’s ambitions for years to come.

Russia “has already lost a lot of military capability, and a lot of its troops, quite frankly,” Mr. Austin said. “We want to see them not have the capability to very quickly reproduce that capability.”