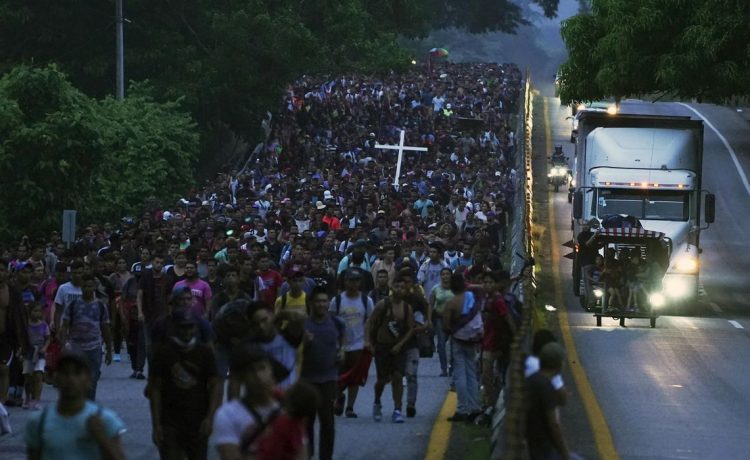 Homeland Security’s announcement that it will begin to oust some Venezuelan illegal immigrants caught jumping the border is turning out to be less than it seems, according to Border Patrol agents and analysts who say the policy is riddled with holes.

Meanwhile, Homeland Security hasn’t said whether families or children traveling alone will be subject to the new policy. If they are carved out, it would further reduce the universe of people who will be blocked at the border.

Stephen Miller, an architect of former President Donald Trump’s immigration policies who is now president of America First Legal, said the Biden administration is fooling people into thinking it has taken a step toward border security. He predicted that many Venezuelans who try to jump the border will get in.

“This is another pathetic misdirection from the open borders zealots running the Biden Administration. Between backdoor parole, exempt demographics, arbitrary caps, asylum fraud, and the masses of gotaways (because they aren’t going back to Venezuela) it’s just a thin smokescreen for yet more open borders,” Mr. Miller told The Washington Times.

Facing border chaos, the Biden administration recently announced a new effort to stop at least some of the newcomers from Venezuela. That country has become a leading source of illegal immigrants, with migrants swamping cities like El Paso, Texas.

Homeland Security Secretary Alejandro Mayorkas’ solution is to create a new avenue for 24,000 Venezuelans to come legally, albeit on a short-term basis, while announcing that other Venezuelans would be pushed back across the border into Mexico.

To gain Mexico’s cooperation in taking returnees, the administration announced it would double the number of seasonal non-farm work visas for foreigners in fiscal 2023.

Mr. Mayorkas didn’t say explicitly what authority was being used for the pushback, but immigrant-rights groups said he was using Title 42 — a pandemic-era policy pioneered by Mr. Trump.

The activists were none too happy.

“We can’t celebrate the administration’s move to create a path to safety for some Venezuelans, if the price to pay is cutting off access for many others and attempting to entrench an illegal policy,” said Lee Gelernt, an American Civil Liberties Union lawyer who is leading a legal challenge to Title 42.

Benjamin Johnson, executive director at the American Immigration Lawyers Association, said he was “deeply disturbed” by the return-to-Mexico policy.

He also doubted its effectiveness, predicting that those who are kicked back across the boundary won’t return to Venezuela and instead will try to jump the border again until they manage to sneak in successfully.

Homeland Security did not respond to inquiries for this report, leaving unanswered questions about its actual plans.

The administration has said it won’t subject unaccompanied children to Title 42, so they are not likely to be blocked by the new policy.

The administration also has been lenient to parents showing up with children, applying Title 42 in about 1 in 5 family cases this year, so it’s not clear whether many of them would be sent back, either.

Then there is Mexico’s limit on cooperation.

The National Border Patrol Council said agents have been made aware that Mexico has capped the number of Venezuelans it will take back. The actual cap is unknown, but the council said it’s going to be “a small percentage of what’s actually coming in.”

The Mexican Embassy didn’t respond to a request for comment.

The plan Mr. Mayorkas announced to allow 24,000 Venezuelans to enter legally builds on similar programs he used to admit 77,000 Afghan evacuees last year and is using to bring in 100,000 Ukrainians this year.

They all entered under his “parole” authority, which allows him to grant a special national interest waiver to the law that would usually bar people from entering. Parole allows a two-year legal presence, along with the ability to apply for a work permit, which means the ability to hold a job legally and opens the door to certain taxpayer benefits.

It is not meant to be a pathway to permanent status or citizenship, though the Biden administration has asked Congress to create a pathway for the Afghans.

Each of the 24,000 Venezuelans must be sponsored by an American citizen or current lawful resident, who must promise to provide financial support and guidance to the new arrival. That was also a condition for the 100,000 Ukrainians, though not for the Afghans.

“These actions make clear that there is a lawful and orderly way for Venezuelans to enter the United States, and lawful entry is the only way,” Mr. Mayorkas said in announcing the program.

He added: “Those who attempt to cross the southern border of the United States illegally will be returned to Mexico and will be ineligible for this process in the future.”

Immigrant-rights activists said requiring sponsors would block out some of the neediest refugees fleeing Venezuela, who are unlikely to have ties to the U.S.

Embracing expulsions marks a significant symbolic reversal for the Biden administration, which is still fighting in the courts to end the Title 42 tool it is now harnessing.

A court has issued an injunction blocking the administration from ending Title 42.

Homeland Security, in announcing the Venezuelan program, said that it works to tamp down illegal crossings, and the department will look to expand its use to other nationalities.