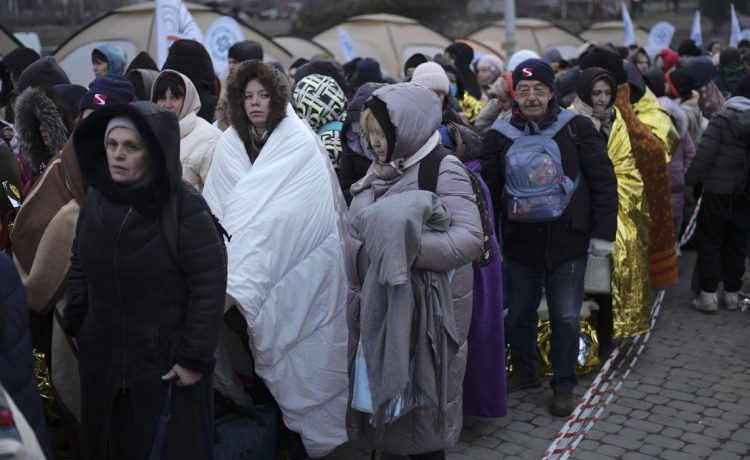 Homeland Security is rushing to recruit volunteers from within its ranks to vet Americans who want to sponsor Ukrainians fleeing their country amid the ongoing war with Russia.

The move is the latest sign that U.S. Citizenship and Immigration Services is overwhelmed by the demands the Biden administration is placing on it, according to former officials who worry that the raw recruits are being sought to “rubber-stamp” all applications.

The volunteers are supposed to carry out the Biden administration’s plan to welcome 100,000 Ukrainian migrants by connecting them with sponsors who have vowed to make sure the newcomers are financially supported and don’t become a burden on taxpayers.

Volunteers will check out the would-be sponsors’ claims of financial backing.

“This critical work ensures that U.S.-based supporters are vetted by USCIS and are able to support Ukrainian beneficiaries, who are seeking to be paroled into the United States,” USCIS, a Homeland Security agency, said in its plea for help.

He said there are people at USCIS who are trained to do this kind of work already, but they are working on other Biden administration priorities, like pushing to grant more green cards more quickly. That’s why the agency had to put out its cattle call for the Ukrainians.

“They’re just taking any willing body that’s employed at the agency and giving them 10 minutes of training and ‘Here you go,’” Mr. Law said.

President Biden vowed to welcome Ukrainians with what’s known as “parole,” a permit to live and work in the U.S. for two years. It’s the same power used to bring 77,000 Afghans to the U.S. during the Biden administration’s chaotic airlift last year.

But unlike the Afghans, the Ukrainians are supposed to be sponsored by a U.S. citizen or legal resident who commits to supporting them financially for their duration here, providing housing assistance, health care and help in applying for government benefits or enrolling children in school.

Sponsors must prove they have sufficient income or funds to last the duration of parole and must surmount a background check to make sure there are no risks of human trafficking or exploitation.

Arriving Ukrainians don’t have to prove they’ve received a COVID-19 vaccination, but they do have to attest that they had a medical exam. They are not required to submit documentation before arrival.

Once here, they can apply for work permits, which entitle them to some taxpayer benefits.

USCIS declined to answer questions about the training the volunteers will get to vet the support applications, though it appears the lessons will be brief: The solicitation email that went out to employees called it “an initial training” and said volunteers would “start processing reviews the day after training has taken place.”

The agency says it has received 142,000 requests from would-be supporters.

About 100,000 Ukrainians have been authorized to come, and more than 64,000 have already been admitted under the effort, known as Uniting for Ukraine.

Another 99,000 Ukrainians have been admitted since March 24 through pathways outside Uniting for Ukraine.

USCIS wouldn’t say why it needed to turn to volunteers to help out, but it’s become a frequent solution under the Biden administration as the agency struggles to handle the workload Mr. Biden has foisted on it. That includes welcoming Afghans during last year’s airlift and helping with the border migrant surge that began at the start of the Biden administration.

Even as it takes on the new tasks, USCIS says it’s struggling financially and has had to ask Congress for an infusion of cash. USCIS is supposed to be funded through fees paid by immigrants themselves.

Biden officials have blamed the Trump administration for leaving the agency in financial straits.

But Mr. Law said the call for volunteers is more evidence that the problem wasn’t Mr. Trump’s management, but rather taking on too many missions it’s not prepared for.

“There is institutional failure within USCIS,” Mr. Law said.