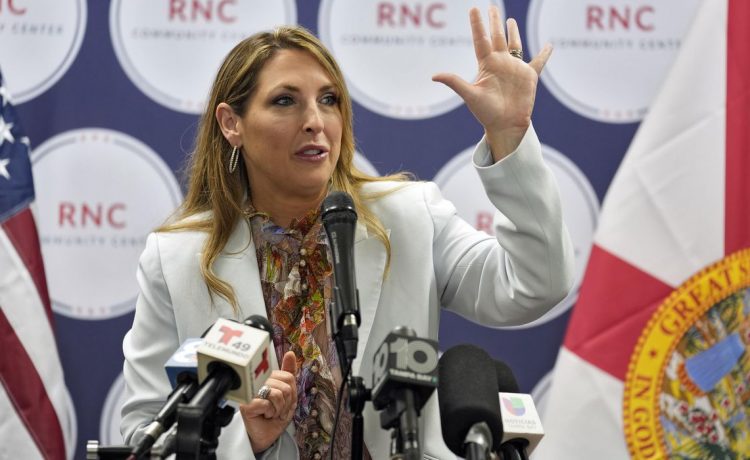 The race for chair of the Republican National Committee is dividing prominent households — pitting husband against wife.

Dick and Elizabeth Uihlein, billionaire GOP donors, have lined up on different sides of the battle over who is best equipped to lead the Republican National Committee.

Mrs. Uihlein has thrown her political muscle behind Ronna McDaniel’s quest for a fourth term as RNC chair, while Mr. Uihlein is backing Harmeet Dhillon’s bid.

The powerhouse couple founded Uline, a shipping company, and have poured tens of millions of dollars into Republican and conservative causes over the years, helping to shape the direction of the party.

In an email to the 168 members of the RNC, Mrs. Uihlein said, “There is no question Ronna McDaniel is the right person for the job.”

Mrs. Uihlein also wrote, “I have been intimately involved in Republican politics my entire life, and I have carefully observed the Republican National Committee’s operations over the past 6 years. With full confidence, I endorse Ronna McDaniel for another term as Chairwoman.”

Mr. Uihlein went in the other direction, heralding Ms. Dhillon as the best pick for the job.

“The Republican Party needs new leadership,” Mr. Uihlein said in his announcement. “While I appreciate the work that Ronna McDaniel has done during her tenure as RNC Chair, it’s time for a leader willing and equipped to prevail in the fight against the radical left.”

He said, “That leader is Harmeet Dhillon.”

The dueling endorsements are a reminder of how the race between Mrs. McDaniel and Ms. Dhillon is heating up ahead of the RNC’s winter meeting later this month in California when members will have the final say.

Mrs. McDaniel has served as chairwoman since then-President Donald Trump tapped her for the job in 2017 after she helped put Michigan in the Republican column for the first time since 1988.

Ms. Dhillon, an RNC member from California, has emerged as Mrs. McDaniel’s top rival and has touted the support of other major GOP donors, including Home Depot founder Bernie Marcus.

Ms. Dhillon has made the case it’s time for a fresh start after a series of electoral setbacks on Mrs. McDaniel’s watch.

In his endorsement, Mr. Uihlein said it is time for a change.

“The course of history has brought us to a crossroads — either we will embrace a new vision and plan for victory for the future of our Republican Party or we will remain idle and allow complacency to guide us,” Mr. Uihlein said.

This is the first time Mrs. McDaniel has faced a serious challenge for the national party’s top post.

Mrs. McDaniel has said over 100 members have pledged their support for her campaign, more than enough to win another term.