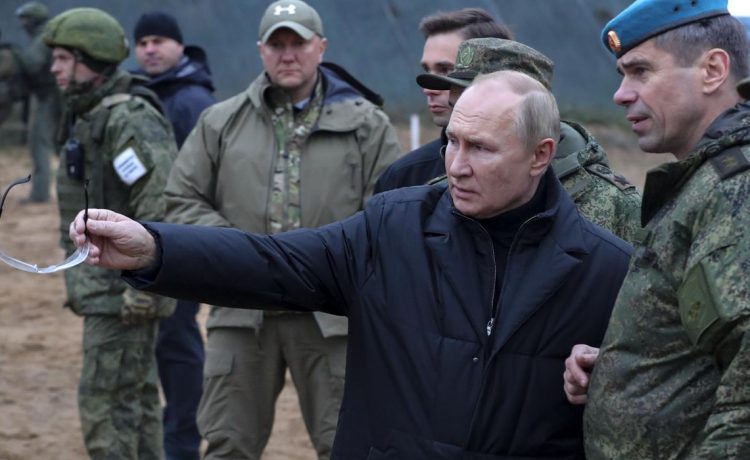 The U.S. and its European allies mounted a pre-emptive, full-court press Monday to debunk Russian claims about a looming “dirty bomb” attack by Ukrainian troops on Ukrainian soil, painting those claims as the potential first step in a major Kremlin “false flag” operation that could justify a Russian response and ultimately escalate to a nuclear war.

Leaders at the State Department and Pentagon, along with defense officials and diplomats across Europe, loudly shot down the idea, which was first floated by Russian Defense Minister Sergei Shoigu over the weekend. Other Russian officials, including Foreign Minister Sergey Lavrov, repeated the allegations Monday, insisting that they had seen intelligence reports indicating Ukrainian forces are preparing to target Russian troops inside Ukraine with a dirty bomb, a device containing conventional explosives mixed with radiological material.

Mr. Shoigu was purportedly so alarmed at the prospect that he held not one but two phone calls in two days with U.S. Secretary of Defense Lloyd Austin — after not having conferred directly with his counterpart since the spring.

But Moscow produced no evidence backing up its claims, and U.S. officials said it’s an instance of blatant disinformation from the Kremlin on a par with Moscow’s stout denials at the beginning of the year that it was planning to invade its neighbor.

“These allegations are false. The Ukrainians are not building a dirty bomb,” a senior U.S. military official told reporters at the Pentagon Monday. “This is something that we monitor very closely on a daily basis.”

Defense analysts said the threat of a Ukrainian dirty bomb made little strategic sense, as Ukrainian conventional forces have a clear initiative on the ground and any dirty bomb detonation threatens to endanger Ukrainians as well as Russians in the fallout.

Defense officials also said there’s no evidence that Russia has decided to employ nuclear weapons in Ukraine, though it’s clear the U.S. and its allies are growing increasingly concerned about such a scenario and about why Russia appeared to be preparing the ground to justify an escalation.

The troubling Russian claims come against the backdrop of a brutal aerial assault on Ukrainian energy infrastructure. Russian missiles and drones continued Monday to target energy facilities across the country, and Ukrainian officials said at least six civilians were killed Monday in those assaults.

Moscow’s air attacks in Ukraine are aimed at knocking out electricity and clean water systems for Ukrainian civilians ahead of the winter season.

But the Russian campaign seems to have done little to shake the resolve of Ukrainian soldiers or civilians. In eastern and southern Ukraine, for example, Russian forces have steadily lost ground to a Ukrainian counteroffensive that has proved more effective than virtually anyone anticipated.

With momentum on its side, Ukrainian troops are readying for a major attack on the strategically vital southern city of Kherson, which Russia has controlled since the early days of the war. A Ukrainian victory there would mark a massive symbolic and logistical defeat for Russia, as it would cut off a crucial link between Ukraine and the Crimean peninsula, which Russia controls and has used as a primary staging ground throughout the conflict.

“Russia loses to us in a real confrontation on the battlefield. [Russia’s] army does not know how to fight,” he said.

The Ukrainian leader added, “If Russia calls and says that Ukraine is allegedly preparing something, it means one thing: Russia has already prepared all this. So when today the Russian minister of defense organizes a phone carousel and calls foreign ministers with stories about the so-called ‘dirty’ nuclear bomb, everyone understands everything well.”

Ukraine also has proved remarkably effective at adapting to the threat posed by the Iranian drones that Russia has increasingly deployed. About 85% of the Iranian Shahed-136 drones have been destroyed by Ukrainian troops before they hit their intended targets, British military officials said Monday.

But Ukraine’s battlefield successes are exactly why Russia’s dirty bomb allegations have struck a nerve across the West. Seemingly unable to defeat Ukraine using conventional war-time tactics or even by targeting civilians, Russia may embrace a nuclear strike as its last best chance to turn the tide of battle.

Mr. Shoigu might have some personal reasons for changing the narrative: He has received withering criticism in Russia itself over his management of the war, particularly from Russia’s vocal corps of pro-war military bloggers. There have been rumors that Mr. Shoigu was being replaced or demoted as Russia’s forces consistently underperformed in the fighting.

Russian President Vladimir Putin and other top Russian officials for months have made thinly veiled references to the country’s massive nuclear arsenal and their potential willingness to use a tactical nuclear bomb in Ukraine. Such a move would radically change the nature of the war and would almost surely draw a direct military response from the U.S. and NATO, which could lead to a broader nuclear conflict.

Mr. Shoigu’s allegations Sunday could be the first step in Russia’s justification for such a strike. If Moscow were to claim that Ukraine targeted Russian troops with a dirty bomb, it could use that incident as justification to respond with its own nuclear attack, potentially setting off a chain reaction that could lead to all-out nuclear wear and unprecedented death and destruction.

If that is indeed Moscow’s plan, the wheels are fully in motion. Mr. Shoigu on Sunday spoke to his counterparts in the U.S., Britain, France and elsewhere in Europe. His claims were rejected in private calls with each of his counterparts, but the conversations still marked the possible first step in an unfolding plan.

Russian military officials said Monday that their forces in Ukraine are now on high alert for possible radioactive contamination in Ukraine, while Mr. Lavrov fired back at the Western nations publicly denying Russia’s assertions.

“It’s not an unfounded suspicion. We have serious reasons to believe that such things could be planned,” the Russian diplomat said at a news conference Monday.

The U.S. and Europe fired back at those claims quickly and publicly, spelling out in no uncertain terms exactly what they believe Russia aims to do. Late Sunday night, U.S. Secretary of State Antony Blinken and the foreign ministers of Britain and France accused Russia of planting the seeds for escalation in Ukraine by raising the possibility of such an attack.

“Earlier today, the defense ministers of each of our countries spoke to Russian Defense Minister Sergei Shoigu at his request. Our countries made clear that we all reject Russia’s transparently false allegations that Ukraine is preparing to use a dirty bomb on its own territory,” the three nations said in a statement. “The world would see through any attempt to use this allegation as a pretext for escalation. We further reject any pretext for escalation by Russia.”

Later Sunday evening, Mr. Blinken spoke to Ukrainian Foreign Minister Dmytro Kuleba. The two men discussed the dirty bomb allegations and the “broader implications” of the Russian war in Ukraine, the State Department said in a readout of the call.

But the Kremlin was not backing away from the dirty bomb charges Monday: “Their distrust of the information that has been provided by the Russian side doesn’t mean that the threat of using such a dirty bomb doesn’t exist,” Kremlin spokesman Dmitry Peskov told reporters in Russia.