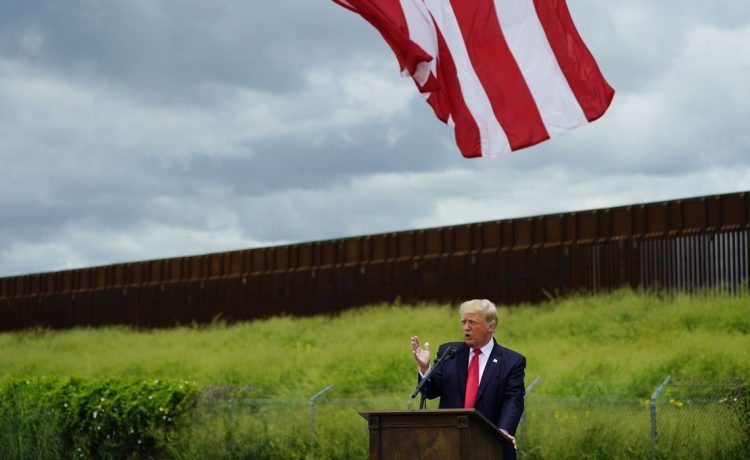 Former President Donald Trump lashed out at President Biden’s border policies Monday, saying he bequeathed his successor a secure boundary which he then squandered.

Mr. Trump, who has already launched a new bid to challenge Mr. Biden in 2024, proposed new steps for Congress to take to override the White House and reimpose controls on the border.

Among them is a call for a permanent expulsion authority for illegal immigrants, similar to the pandemic Title 42 policy that the Trump team used to nearly end catch-and-release of border crossers in 2020.

Mr. Trump also called for more resources to detain illegal immigrants who can’t be expelled. And he urged Congress to create criminal penalties for government officials who aid and abet releases.

“The border nightmare is happening for a single reason: because illegal aliens know that if they break into our country unlawfully, Joe Biden will do everything possible to ensure that they are not removed, and are allowed to stay here indefinitely,” Mr. Trump said in a statement issued by his campaign.

His comments came a day before Title 42 is slated to expire at midnight on Tuesday.

A judge has ruled the policy illegal and the Biden administration has agreed to the deadline.

Experts say the end of Title 42 could send illegal immigration, already at a sustained record pace of about 7,000 illegal immigrants a day, to as high as 18,000.

The White House has said Mr. Biden has plans to handle the expected surge. His critics, including a growing number of Democrats, have cast doubt on those claims.

Mr. Trump ran on the issue in 2016, promising to build a border wall, tamp down on new arrivals and oust more of the 11 million or so already living illegally in the interior. He succeeded in building more than 450 miles of new fencing and sent border numbers to historic lows, though he struggled to fulfill his goal of more deportations from the interior.

Mr. Biden in 2020 ran on promises of halting the wall and undoing Mr. Trump’s accomplishments on the border and pushing for mass legalization for illegal immigrants already here.

He failed to win the amnesty but has succeeded in ending the Trump policies.

The result has been border chaos, with record numbers of illegal crossers, record levels of fentanyl, and historic numbers of terrorism suspects detected sneaking across the U.S.-Mexico boundary.