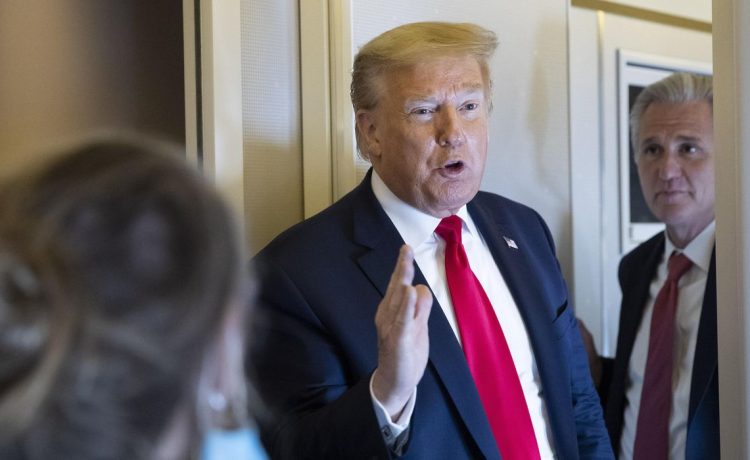 Former President Donald Trump claimed credit over the weekend for helping persuade some conservative holdouts to throw their support behind Rep. Kevin McCarthy for House speaker.

“The Fake News Media was, believe it or not, very gracious in their reporting that I greatly helped Kevin McCarthy attain the position of Speaker of the House,” Mr. Trump wrote on his social media site Truth Social. “Thank you, I did our Country a big favor!”

The victory lap came after Mr. McCarthy thanked the 2024 presidential candidate just minutes after the California Republican won the contentious battle for speaker on the 15th ballot that spanned over five days.

“I do want to especially thank President Trump. I don’t think anybody should doubt his influence. He was with me from the beginning … And he was all in. He would call me and he would call others,” Mr. McCarthy told reporters early Saturday morning.

“He really was — I was just talking to him tonight — helping get those final votes,” Mr. McCarthy continued. “What he’s really saying, really for the party and the country, that we have to come together. We have to focus on the economy,” he continued. “We’ve got to focus, make our border secure. We’ve got so much work to do, and he was a great influence to make that all happen. So, thank you, President Trump.”

But not all Trump allies in Congress heeded the calls to fall in line for Mr. McCarthy.

Rep. Matt Rosendale of Montana, for example, publicly ignored a phone call from Mr. Trump on the House floor.

Rep. Marjorie Taylor Greene, Georgia Republican, tried to hand him her phone with the ex-president on the line and the image became an instant Internet meme.

But Mr. Rosendale and other opponents did ultimately vote “present,” allowing the threshold for the number of votes needed to drop and Mr. McCarthy to win.