The Great Days > News > Donald Trump gears up for 2024 White House run, and his base is ready to support him again
News

Donald Trump gears up for 2024 White House run, and his base is ready to support him again 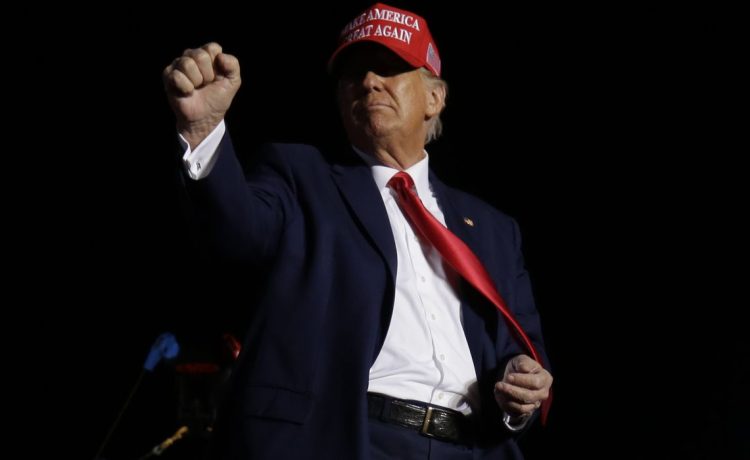 PALM BEACH, Fla. — The 2024 presidential election was poised to launch on Tuesday from the chandelier-lit grand ballroom at Mar-a-Lago, where former President Trump was expected to announce a third bid for the White House.

Mr. Trump, 76, will defy former campaign aides and even some in his inner circle who hoped the poor showing for midterm Republicans would dissuade him from an early 2024 announcement, at least until after a critical Dec. 6 Senate runoff in Georgia.

Preparations for the event signaled the former president is going full steam ahead after teasing his intentions for months at dozens of “Save America” rallies across the United States.

Mr. Trump invited an army of media to cover the event, setting them up in an ornate ballroom on the grounds of his luxury resort and residence. Large television screens displayed Mr. Trump’s “Make America Great Again!” campaign slogan that fueled his improbable 2016 win, and dozens of television cameras were set up on risers waiting for what Mr. Trump previewed as a “special announcement.”

Steps away from his estate, some of Mr. Trump’s loyal base began to gather along a bridge over the intercoastal waterway, They brought large signs and flags supporting the former president. They were thrilled Mr. Trump planned to announce his 2024 bid.

Mr. Trump’s announcement will put him slightly ahead of an ambitious field of GOP rivals.

Vice President Mike Pence, who launched his new book, “So Help Me God,” on Tuesday, the same day as Mr. Trump’s big announcement, said he’s considering running and will participate in a town hall-style event on CNN on Wednesday. He’s begun to criticize his former boss, telling ABC News he predicts there will be “better choices” than Mr. Trump on the 2024 ballot.

Former Secretary of State Mike Pompeo may also get into the race, as well as Florida Gov. Ron DeSantis, who conservative media has crowned a new GOP star after he won his reelection bid last week by a historic 20 points.

Mr. Trump drew criticism even from his staunchest media allies for lashing out at Mr. DeSantis as well as Virginia Gov. Glenn Youngkin, another rising Republican.

Floridians who love Mr. Trump also back Mr. DeSantis, 44, and his growing popularity could pose a serious threat to Mr. Trump’s grip on the GOP primary base. Mr. Trump launched a preemptive strike on Mr. DeSantis earlier this month, labeling him “Ron DeSanctimonious.”

Ms. Macchia said if Mr. DeSantis runs for president, she’d have a hard time choosing between the two.

“It’s a hard question,” Ms. Macchia said. “I guess I’ll have to wait and see.” She called Mr. DeSantis “the best governor the state has ever seen,” and suggested Mr. Trump should choose him as his running mate.

“I believe Trump should have a female vice president,” Ms. Thomson said.

A motorboat pulled up under the bridge, its topside decked out in U.S. and Trump flags and dropped anchor in view of Mar-a-Lago. Mr. Trump’s detractors also made a showing. A small yellow plane flew back and forth over the estate, dragging a banner with a stern message: “You lost again Donald! #DeSantis 2024.”

Mr. Trump’s launch comes amid polling that shows voters have mixed feelings about him running again, while pro-DeSantis groups are pushing new polling that shows the Sunshine State governor leading Mr. Trump in several of the states that will vote first in the 2024 GOP primary, including Iowa and New Hampshire.

His detractors are unlikely to dissuade Mr. Trump. In most hypothetical primary polling, he’s come out ahead by double digits, even over Mr. DeSantis, while other Republican candidates barely register with GOP voters, at least for now.

Mr. Trump’s announcement could clash with possible criminal charges the Justice Department is said to be weighing in connection with his actions to overturn President Biden’s 2020 victory. He’s also under investigation for taking classified information from the White House when he left office.