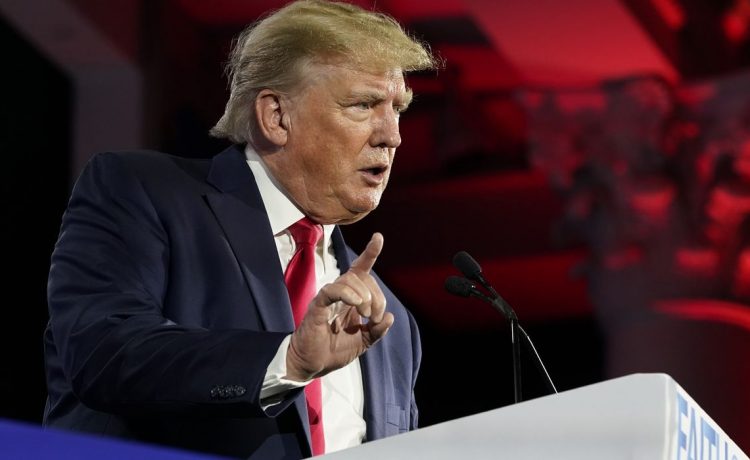 Former President Donald Trump is calling on House Republicans to vote against an 80-page gun control bill poised to pass the Senate this week.

Mr. Trump, in a statement on his Truth Social site, said the measure “will go down in history as the first step in a movement to TAKE AWAY YOUR GUNS.”

The legislation would provide incentives to states to implement so-called red flag laws, which allow law enforcement to take guns away from people deemed by a judge to be dangerous or mentally unstable.

The bill would also expand federal background checks of gun buyers under the age of 21 and increase the waiting period for under-21 gun purchases.

The Senate advanced the bill Tuesday with the help of 14 GOP lawmakers after negotiations were finalized and approved by top Senate Republicans, including Minority Leader Mitch McConnell of Kentucky and Sen. John Cornyn of Texas.

Senate approval means Congress is now poised to end a decades-long gridlock on legislation that restricts gun purchases or ownership.

A bipartisan group of Senate lawmakers, led on the GOP side by Mr. Cornyn, negotiated the bill after a mass shooting at an elementary school in Uvalde, Texas, in which an 18-year-old man entered the school and used an AR-15-style firearm to kill 19 fourth-grade students and two teachers.

Mr. Trump on Wednesday called Mr. Cornyn a RINO, or Republican-in-Name-Only and also blamed Mr. McConnell for sanctioning the bill, which he said was crafted by radical left Democrats.

“Republicans, be careful what you wish for!!!” Mr. Trump said.

House Republican leaders oppose the bill and are whipping their GOP rank-and-file to vote against it.

In the Senate, they need 10 GOP lawmakers to meet the 60-vote threshold needed to end debate, so the support Tuesday of 14 Republicans is decisive. In the House, only a simple majority is needed to pass the bill and it’s likely several Republicans will vote for the measure.

Gun-rights organizations oppose provisions in the bill extending the waiting period and incentivizing red-flag laws, which they argue would violate the Second Amendment right to keep and bear arms.