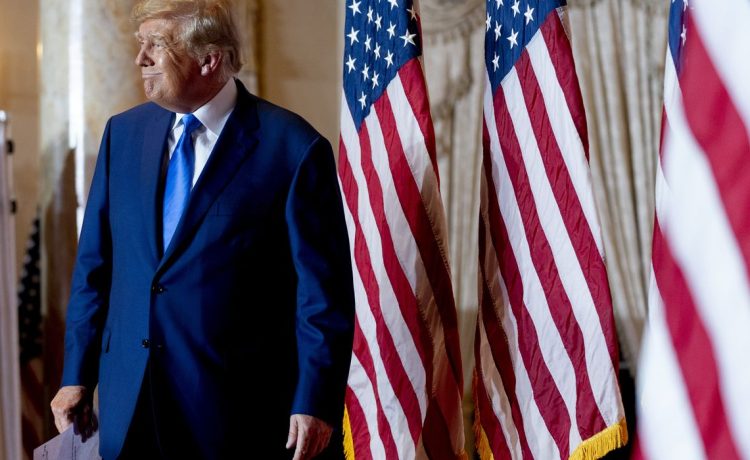 Former President Donald Trump, who is expected to announce a third White House bid on Tuesday, unleashed a series of preemptive attacks on 2024 GOP rivals and blamed party leaders for election losses that cost the Senate GOP the majority.

Mr. Trump launched multiple broadsides at his party as Republicans maintained hope that they can win one more GOP seat in Georgia, where a Dec. 6 Senate runoff will determine whether GOP challenger Herschel Walker, who he endorsed, can defeat Democratic incumbent Sen. Raphael Warnock.

The win would give Republicans 50 seats, keeping the Senate evenly divided but in Democratic hands thanks to the tie-breaking authority of Vice President Kamala Harris.

Republicans are expected to win back the House majority, but with far fewer seats than initially anticipated.

Mr. Trump is under fire from fellow Republicans who say he endorsed flawed candidates in multiple losing House and Senate races.

Mr. McConnell also chose to give campaign cash to Alaska’s moderate Republican incumbent, Sen. Lisa Murkowski, who is fending off a challenge from the more conservative Kelly Tshibaka, who is endorsed by Mr. Trump.

On his Truth Social media site, Mr. Trump called Mr. McConnell, who is a longtime political foe, “a disaster for the Republican Party and the country.”

He called former GOP speaker Paul Ryan “the worst speaker” and “a loser” after Mr. Ryan said Mr. Trump was a drag on the Republican ticket.

Mr. Trump also unleashed attacks on top potential 2024 rivals ahead of the expected launch of his presidential campaign on Tuesday.

He fired two unprovoked attacks at Florida Gov. Ron DeSantis and Virginia Gov. Glenn Youngkin, fellow Republicans who are increasingly viewed as the future of the GOP.

In a long statement, Mr. Trump accused Mr. DeSantis, who he dubbed “Ron DeSanctimonious,” of being disloyal by refusing to pledge that he will not run for president in 2024.

In a separate statement, Mr. Trump said Mr. Youngkin “couldn’t have won without me” and that Mr. Youngkin’s name “sounds Chinese.”

“Young Kin (now that’s an interesting take. Sounds Chinese, doesn’t it?) in Virginia couldn’t have won without me,” Mr. Trump wrote on his Truth Social platform. “But he knows that, and admits it.”

“The more Trump lashes out at his GOP colleagues, the more it pushes voters away from the former president,” one GOP strategist, who asked to remain anonymous, said. “His strategy isn’t working and is having the opposite effect.”