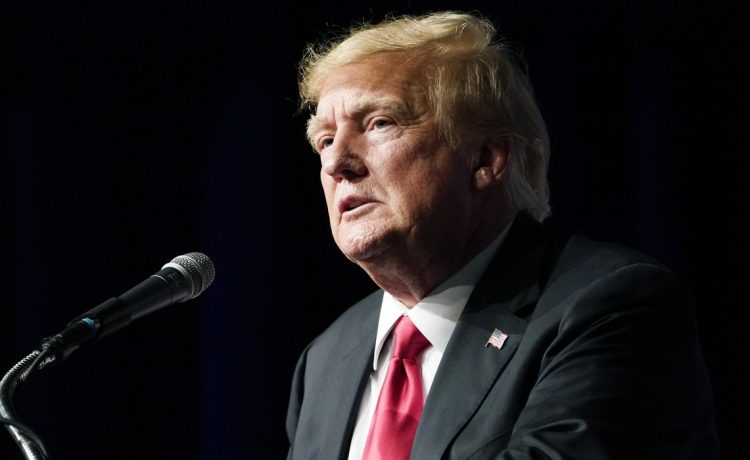 Former President Donald Trump is under investigation for violations of the Espionage Act and agents seized 11 sets of classified materials from his Mar-a-Lago estate earlier this week, according to a copy of the search warrant released Friday.

The warrant authorized the FBI raid Monday on Mr. Trump’s residence at the private Mar-a-Lago club in Palm Beach, Florida, setting off a partisan firestorm over the first-ever federal search of a former president’s home. The severity of the crime, which harkens back to the FBI’s longtime probe of Trump-Russia collusion, promises to further fuel Republicans’ outrage over the Biden administration’s pursuit of the former president.

The Espionage Act is a federal law that bars the unauthorized retention of national security information that could benefit a foreign adversary or harm the U.S. It also makes it a crime to destroy or hide a federal government document, or unlawfully remove government materials.

Under federal law, anyone convicted of violating the Espionage Act could face a $10,000 fine and a 20-year prison sentence. It is unclear from the search warrant how investigators believed Mr. Trump may have violated the statute, which dates back to World War I.

A property receipt released by the court Friday shows that the FBI removed 11 sets of documents from Mr. Trump’s home, including some labeled “top secret.” That’s the highest classification level issued by the U.S. government.

Agents removed roughly 28 boxes from Mr. Trump’s estate. Among the material seized in the raid were four sets of top secret documents, three sets of secret documents and three confidential documents, according to the list.

One set of documents was marked “various classified/TS/SCI documents,” which is government shorthand for “top secret, sensitive compartmented information.”

However, what was contained in those sets of classified and top secret materials remains a mystery.

The Washington Post reported Thursday that investigators were seeking classified documents related to nuclear weapons, but the warrant made no mention of nuclear secrets.

Mr. Trump also insisted that the report was untrue, calling it a hoax. He said all the material was no longer classified, and his lawyers have said that he declassified the documents before leaving office.

Mr. Trump said the Justice Department could have had all of the material without conducting a raid on his home.

“Number one, it was all declassified. Number two, they didn’t need to ‘seize’ anything,” Mr. Trump said in a statement. “They could have had it anytime they wanted without playing politics and breaking into Mar-a-Lago. It was in secured storage, with an additional lock put on as per their request. They could have had it anytime they wanted—and that includes LONG ago. ALL THEY HAD TO DO WAS ASK.”

The documents were disclosed Friday afternoon after Mr. Trump and his legal team announced they would not oppose the Justice Department’s motion to unseal the search warrant and property inventory.

In a brief, one-page motion Mr. Trump’s legal team said the former president “does not object” to the government’s motion.

The move was widely expected after Mr. Trump himself posted on his social media platform late Thursday night that he will not oppose the release of documents related to the search of Mar-a-Lago.

“Not only will I not oppose the release of documents related to the unAmerican, unwarranted, and unnecessary raid … I am going a step further by ENCOURAGING the immediate release of those documents,” he said in a statement on Truth Social.

It is highly unusual for a federal judge to order the release of a search warrant, but it is also very rare for the Justice Department to make such a request.

According to the Justice Department’s filing, the heightened public interest in the case justifies its unsealing. However, the department also made it clear that Mr. Trump should have an opportunity to weigh in if the materials could cause harm if they are made public.