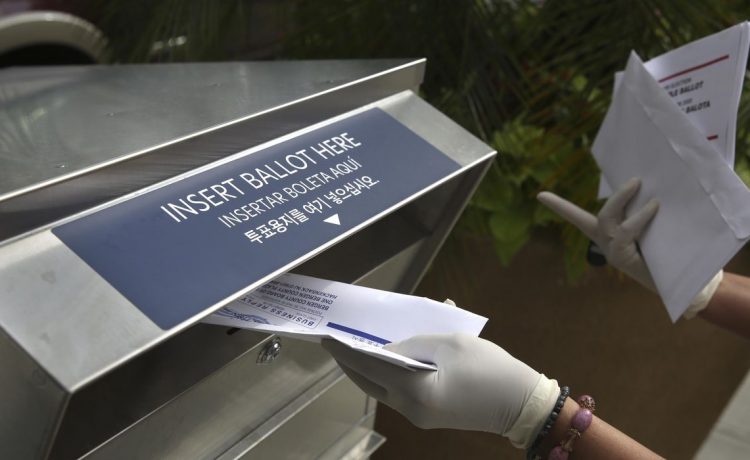 President Trump and other Republicans are discouraging mail-in voting, narrowing opportunities for their base to help get GOP candidates elected in the fast-approaching Nov. 8 elections.

Mr. Trump has been railing against mail-in voting since it was expanded in the 2020 election in response to the COVID-19 pandemic. He has revived his warning at rallies for 2022 candidates in key swing states and warned that mailed ballots might be manipulated or lead to election fraud.

Mr. Trump’s disparagement of mail-in voting has led to fears of a repeat of the 2021 Senate runoff elections in Georgia, where depressed GOP turnout, spurred by Mr. Trump’s election fraud claims, helped Democrats win both Senate seats to seize control of the upper chamber. Prior to the runoff election, Mr. Trump fought the state’s mail-in balloting rules and then called the election “rigged.”

At a campaign rally last week in Mesa, Arizona, Mr. Trump extended the warning to the midterm elections, telling hundreds of supporters to vote in person, because voting by mail could lead to election fraud.

Republicans in other states are also challenging the integrity of voting by mail.

“Pennsylvania Democrats have a history of election integrity failures and Pennsylvanians deserve better,” top Republican officials, including Republican National Committee Chairwoman Ronna McDaniel, said in a joint statement announcing their legal challenge. “This lawsuit is the latest step in Republican efforts to promote free, fair, and transparent elections in the Keystone State.”

In Delaware, Republicans successfully challenged a new state law allowing no-excuse mail-in voting, which they said would lead to fraud. A state judge ruled the law violates the state’s constitution, which provides specific reasons for a person to vote absentee.

By questioning the integrity of mail-in ballots, Mr. Trump and the GOP may end up reducing Republican turnout if those who mistrust voting by mail don’t show up at the polls on Nov. 8.

Mr. Trump is not concerned that the Republican vote will be depressed.

“Americans are more motivated than ever to vote after seeing the destruction of the country at the hands of Joe Biden and the Democrats,” Trump spokeswoman Liz Harrington said. “Republicans will turn out in record numbers and they want to make sure their vote counts.”

Still, the depressive effect could be particularly damaging for Republicans in key states like Arizona, where typically 80% of ballots are cast by mail.

“It is one of my biggest annoyances,” Mr. Marson said. “Republicans in this state used to dominate early balloting and now thanks to Trump sewing distrust into the mail-in ballot process, which I might add is completely safe and accurate, Dems are now leading in early balloting and that is a problem.”

Mr. Marson said there are practical advantages as well for voters, giving them more time to sort through dozens of races in the comfort of their own homes — as opposed to the rushed nature of the ballot booth.

But Republican concerns about the integrity of mail-in ballots have been reinforced by gaffes and glitches this election season.

On Wednesday, Arizona officials said a glitch resulted in 6,000 voters receiving ballots that included only federal races. Earlier this month, Colorado officials accidentally sent 30,000 postcards to illegal immigrants, encouraging them to register to vote in the upcoming election.

Eight states permit all elections to be conducted by mail, and ballots are sent to every registered voter.  Many other states allow voters to request ballots by mail and conduct elections primarily by mail.

On the list is Nevada, where one of the closest Senate contests in the nation could tip the balance of power in the Senate. In 2020, 1.8 million Nevada voters cast ballots by mail, dwarfing the 158,000 who turned up to vote in person on Election Day, state records show.

Mr. Trump lost in Nevada to Mr. Biden by about 33,000 votes after unsuccessfully suing to block officials from mailing ballots to voters ahead of the election, which he called “an illegal late-night coup.”

Ultimately, Nevada Democrats in the 2020 election mailed in 100,000 more ballots than Republican voters, while 9,000 more Republicans than Democrats turned out to vote in person. The vast majority of unaffiliated voters and voters registered to other parties, who make up the plurality of voters in Nevada, cast ballots by mail in 2020.

Nevada and other states passed laws in 2021 making mail-in voting permanent after initiating it during the pandemic. The Nevada law also allows electronic scanning to verify signatures on mail-in ballots.

Some GOP states have moved to reverse or restrict pandemic-era rules for mail-in voting following concerns about fraud in 2020.

The new law requires additional identification, including a Georgia-issued ID, to apply for a mail-in ballot and cuts off applications 11 days ahead of an election. Applicants must also print and sign documents, a new step that opponents say will create obstacles and curb voting by mail.

The law also limits the number of drop-boxes where voters can cast ballots if they do not return them by mail.

In the 2020 election, mail-in ballots for Mr. Biden in Georgia outnumbered those for Mr. Trump by a 3-to-1 margin and Mr. Biden won the Peach State by about 55,000 votes.

Despite new restrictions in some states, mail-in voting is becoming more prevalent in the U.S., including Republican-leaning states like Florida, which Mr. Trump won in both 2016 and 2020.

“It is a much more efficient and transparent system in place in Florida,” Brad Coker, managing director of Mason-Dixon Polling and Strategy, said. “Seniors are increasingly utilizing it.”

Anyone can vote by mail in Florida, but Republican Gov. Ron DeSantis signed new election laws in 2021 that require voters to request mail ballots every election, instead of every four years. The move was aimed at concerns that ballots were being mailed to ineligible voters.

Berwood Yost, director of the Center for Opinion Research and the Floyd Institute for Public Policy at Franklin and Marshall College, said he’s puzzled by GOP opposition to mail-in voting, especially in light of data showing its appeal to a key Republican constituency.

“In Pennsylvania, 30% of Republicans are over 65 years of age and 67% are over 45,” Mr. Yost said. “It seems that encouraging the use of mail-in ballots would make it easier for older voters to cast their ballots, which should provide an advantage for Republican voters.”