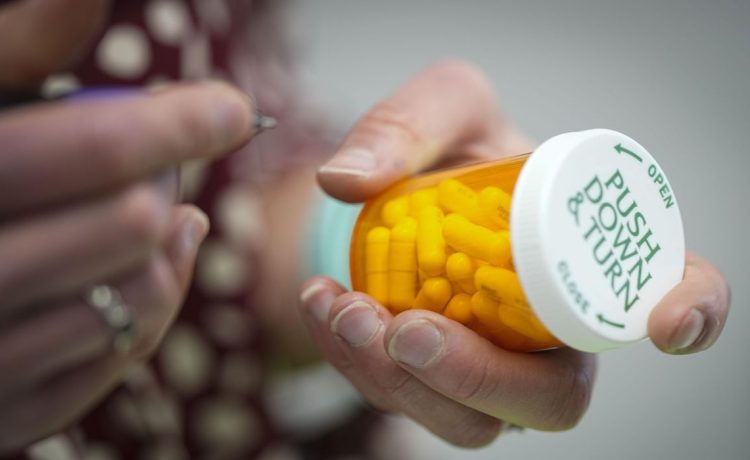 Joan Cohrs missed her chance to grab a prescription at her usual drugstore by about 30 seconds.

Cohrs walked up to the counter of an Indianapolis CVS pharmacy shortly after a metal curtain descended, closing it for lunch. She didn’t mind. The 60-year-old said she feels compassion for people in health care.

“They definitely need a break,” said Cohrs, who was working at an assisted living facility when COVID-19 hit.

A rush of vaccines, virus tests and a busy flu season started overwhelming pharmacies more than a year ago, forcing many to temporarily close when workers weren’t available.

They also ask them to manage a growing amount of patient health. Pharmacists in many stores now help people quit smoking and monitor their blood sugar. And companies like Walgreens are pushing them to work more with primary care doctors.

Pharmacists also can now test for COVID-19 and then prescribe medicine, a process that might take 20 minutes or more.

Giving pharmacists a chance to have a bigger impact on public health is “awesome,” said Stefanie Ferreri, a University of North Carolina pharmacy professor. But she added that “the workforce wasn’t quite ready.”

Pharmacies, like other businesses, were hurt earlier in the pandemic because employees who got COVID-19 – or those in close contact with someone who did – had to miss work for a few days. Stress also left many pharmacists and technicians feeling burned out and looking for other jobs, industry observers say.

The number of job postings for retail pharmacists rose 63% from 2020 to 2021, according to the Pharmacy Workforce Center, a non-profit that tracks openings.

Walgreens leaders said Thursday that they added a net total of 600 pharmacists in the recently completed fiscal first quarter. But staff shortages still force the chain to reduce hours at some pharmacies.

A company representative decline to elaborate, calling it a fluid situation.

In addition to employee shortages, drugstores also are dealing with thin prescription reimbursement. That makes it hard to raise pay to compete for employees, said Douglas Hoey, CEO of the National Community Pharmacists Association.

“When just about everything goes up in price, pharmacies are still getting paid as if it was 2019 or 2018,” he said.

Walgreens is opening processing centers to help fill some of the routine prescriptions that stores get from patients with chronic conditions. Company leaders expect these centers to eventually take over about half the prescription volume from their stores.

The company also said in October it would eliminate all “task-based” measurements that are part of performance reviews for pharmacy employees.

CVS Health is trying to spread data entry and prescription verification work to different locations to ease the load at busy stores.

Those have limited value, according to Bled Tanoe, a former Walgreens pharmacist in Oklahoma City. She said customers often arrive just before the pharmacy closes, eating into the break time.

And store employees frequently catch up on work during that break.

Tanoe, 35, said she left drugstores in 2021 to work at a hospital because the demands were getting “impossible.” She and others say bolder steps are needed to improve the pharmacies. Pharmacists should have the ability to temporarily close counters or cancel some vaccination appointments when workloads get overwhelming, Tanoe said.

“A pharmacist whose license is on the line has to be the one to navigate and to dictate what is happening in the pharmacy on a daily function,” she said.

Dang noted that a relatively new California law prevents chain drugstores from establishing quotas for how many prescriptions a pharmacist must fill during a shift.

He also said drugstores simply need more employees behind the counter if they add services. He noted that the bigger chains are more prone to running drugstores with only one pharmacist.

At least one has to be on duty for a pharmacy to operate.

Ferreri would like to see more drugstores set appointments for regulars. That gives pharmacists predictable workloads and more time to fill and check prescriptions. It also reduces trips for customers and can help them keep track of refills.

“It’s not like the patient’s in, waiting for you to fill 15 prescriptions at once,” she said.

She refills about six prescriptions every month and has her mom enrolled in a similar program at another pharmacy.

“It makes taking care of people who cannot take care of themselves much easier,” the 65-year-old said.

While some pharmacies are changing how they operate, customers also can help. Ferreri recommends giving drugstores a few days to refill a prescription instead of waiting until the last pill.

Patience also is needed, said Brigid Groves, an executive with the American Pharmacists Association. She said they hear more about customers taking out their frustrations on pharmacy employees over delays or medicine shortages.

“I think on both sides of the counter, we need to all have grace and realize this is a very challenging and stressful time for everyone,” she said.