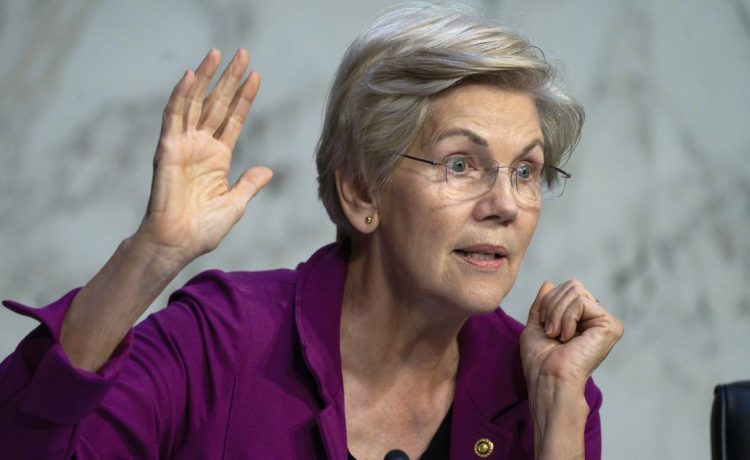 The Consumer Financial Protection Bureau, an Obama-era brainchild of liberal Democrats, could be nearing the end of its run as a regulator free from congressional control of its budget.

The bureau, which is funded by the Federal Reserve, is asking the conservative Supreme Court to uphold that arrangement, which Republicans say is unconstitutional. But the CFPB’s legal arguments to the high court contradict its long-standing position that it doesn’t receive appropriations from Congress.

The Biden administration, confronted with a federal appeals court ruling that found the CFPB’s funding method violates the Constitution, has asked the Supreme Court to hear an appeal and make a decision by this spring. The administration said the ruling “calls into question virtually every action the CFPB has taken in the 12 years since it was created,” and that leaving the agency’s funding in limbo would have “major” consequences for the U.S. financial industry.

Analysts say the problem has been brewing ever since Congress created the CFPB for consumer protection in 2010 as part of the Dodd-Frank law imposing more regulations on the financial services industry. The legislation was a response to the Wall Street meltdown of 2008-09.

“There’s always been from the very beginning clouds of legal uncertainty around the CFPB,” said Adam White, a senior fellow at the American Enterprise Institute and co-director of George Mason University’s Gray Center for the Study of the Administrative State. “The Biden administration is clearly very keen to get this in front of the justices.”

The CFPB was conceived largely by Sen. Elizabeth Warren, Massachusetts Democrat, when she was a professor at Harvard University. Its mission is to police against “unfair, deceptive, or abusive” business practices in areas ranging from credit cards to payday loans.

Over 12 years, the CFPB has sent more than 3.3 million consumer complaints to companies, with a 98% timely response rate by financial firms, according to the House Financial Services Committee. It has delivered more than $14.9 billion in monetary compensation, principal reductions, canceled debts and other consumer relief.

Among its recent actions, the bureau reached a $3.7 billion settlement with Wells Fargo this month over abuses tied to mortgages, auto loans and overdraft fees.

The bank was ordered to pay a $1.7 billion civil penalty and more than $2 billion “in redress to consumers,” the CFPB said.

To ensure the CFPB’s independence, lawmakers set up its funding to come directly from the Fed instead of annual congressional appropriations. The agency’s director is authorized to request whatever funding he or she believes is “reasonably necessary” to carry out CFPB’s operations, as long as the amount doesn’t exceed 12% of the Federal Reserve’s “total operating expenses.” (The bureau was allowed to exceed the cap by $200 million in each of its first five years as long as it notified the president and Congress of any anticipated surplus).

Conservatives have long argued that the CFPB isn’t accountable to voters because it evades Congress’ power of the purse. They have criticized the bureau under Democratic administrations as a regulator run amok, saddling businesses with a wide array of new red tape such as the Payday Lending Rule, which was crafted during the Obama administration and finalized during the first year of the Trump administration.

The complaints came to a head on Oct. 19, when the Fifth Circuit Court of Appeals vacated the Payday Lending Rule because, the judges said, the CFPB’s funding is unconstitutional. The court said that the bureau’s “perpetual insulation from Congress’s appropriations power, including the express exemption from congressional review of its funding, renders the bureau ‘no longer dependent and, as a result, no longer accountable’ to Congress and, ultimately, to the people.”

By creating this self-funding system, the court ruled, “Congress ran afoul of the separation of powers embodied in the Appropriations Clause.”

In urging the Supreme Court to hear its appeal of the ruling, the Biden administration said the Fifth Circuit relied on an “erroneous” interpretation of the Constitution’s Appropriations Clause.

“Congress enacted a statute explicitly authorizing the CFPB to use a specified amount of funds from a specified source for specified purposes,” the administration said in its brief. “The Appropriations Clause requires nothing more.”

The CFPB said its funding method “indisputably establishes an appropriation under the long-accepted understanding of that term.”

But Mr. White points out that the bureau and its leaders have consistently and repeatedly claimed since its creation that the CFPB does not receive “appropriations.”

Among the examples, then-Director Richard Cordray testified to Congress in 2012 that the bureau’s revenues were “non-appropriated funds.” And the bureau’s annual report in 2014 said Dodd-Frank gave it “a source of funding outside the appropriations process.”

The CFPB’s legal brief to the Supreme Court said Congress “is free to modify the Bureau’s funding at any time by simply passing a statute.” It also notes that the federal Court of Appeals for the District of Columbia upheld the CFPB’s funding mechanism because it “fits within the tradition of independent financial regulators.”

The Biden administration said it’s worried that the Fifth Circuit’s ruling will invite new legal challenges to the CFPB’s regulations and will frustrate its “critical work administering and enforcing consumer financial protection laws.”

For example, the administration said if CFPB’s regulations on home loans were vacated, “mortgage lenders would have to immediately modify the disclosures they give millions of consumers each year, and borrowers could seek to rescind certain mortgage transactions that had relied on regulatory disclosure exceptions.” The Mortgage Bankers Association, National Association of Home Builders, and National Association of Realtors have warned that calling into question the CFPB’s past actions could bring “catastrophic” results for the real estate finance industry.

Mr. White dismissed the claim that a Supreme Court ruling against the CFPB would result in economic chaos.

“American financial institutions’ fortunes do not rise and fall merely on the existence of a single federal agency,” he said. “To the extent that the CFPB has for a decade leveraged enormous power over financial institutions based on an extremely shaky constitutional foundation, that reflects a mistake of the CFPB and of the people who created it.”

At a House Financial Services Committee hearing on Dec. 14, Mr. Chopra said the CFPB is taking a variety of actions, including issuing orders to Big Tech firms regarding their use of payment platforms such as Apple Pay, PayPal and Venmo. He said the bureau wants to know “what data they are extracting from transactions and whether they can use that data to preference their other business lines.”

“We are also particularly interested in how these payment platforms implement existing consumer protections, as well as how they make decisions on account approvals, freezes, and terminations,” Mr. Chopra said.

Rep. Patrick McHenry of North Carolina, the ranking Republican on the committee, warned Mr. Chopra that the panel will be scrutinizing the CFPB more closely when the GOP takes over the House majority in January.

“The lack of transparency with your agency is appalling,” Mr. McHenry told Mr. Chopra. “You’re implementing progressive policies at the expense of both consumers seeking financial products and market participants trying to comply with the law. And you’re doing so without fully and transparently considering the consequences of your actions. This is all against the backdrop of the Fifth Circuit Court of Appeals ruling that the CFPB’s funding mechanism is unconstitutional and vacating the CFPB’s Payday Lending Rule as a result.”

The lawmaker said Mr. Chopra, under a Democratic administration, has set a precedent of abusing his powers.

“The political pendulum doesn’t stop swinging. Next month there will be a new majority in the House of Representatives,” Mr. McHenry told him. “I think you’ll wish you tried harder to play by the rules.”