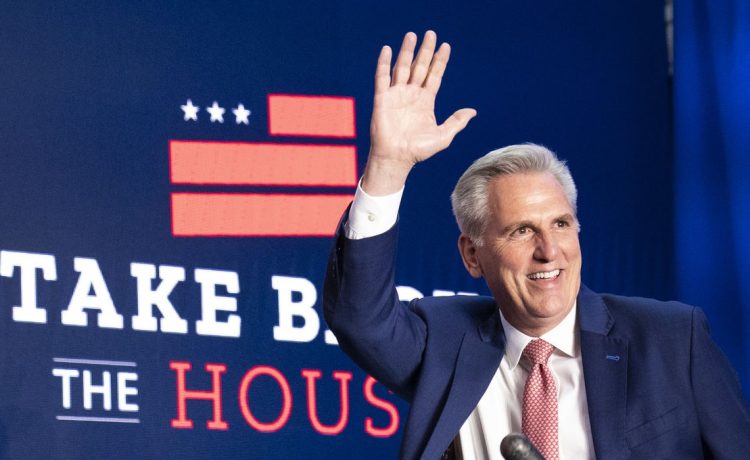 A far-right challenge is brewing to House Republican leader Kevin McCarthy’s run for speaker, prompting him on Wednesday to quickly start lining up support in the conference.

The leadership race kicked off as Republicans closed in on a takeover of the House majority, though some races remained too close to call and the expected “red wave” failed to materialize.

The House GOP’s smaller-than-expected majority increased leverage for the chamber’s arch-conservative House Freedom Caucus to demand concessions from Mr. McCarthy in exchange for support in his speakership bid.

Mr. McCarthy, California Republican, was already working the phones Wednesday to secure support within the group and to blunt a potential challenge, a senior GOP aide told The Washington Times.

In a letter to colleagues announcing his speakership bid, Mr. McCarthy vowed to bring changes that Republicans have long wanted, such as ending pandemic-era rules, more time to review legislation and “putting the right people in the right spots,” which signals more input from members on committee assignments.

“I will be a listener every bit as much as a Speaker, striving to build consensus from the bottom-up rather than commanding the agenda from the top-down,” he wrote. “Everyone has something valuable to bring to the table and my door will always be open to your ideas and input on how we best achieve our shared goals.”

Mr. McCarthy’s biggest obstacle to securing the speakership is the Freedom Caucus and its power vastly increases with a narrow majority.

There also are several viable alternatives to Mr. McCarthy, though they are untested, said a source familiar with the thinking inside the Freedom Caucus.

The most obvious alternatives within the current leadership ranks have already bowed to Mr. McCarthy.

House Minority Whip Steve Scalise, Louisiana Republican, had said he would not challenge Mr. McCarthy and endorsed him for speaker. He made good on that pledge Wednesday, announcing his bid to become House majority leader, which is the No. 2 leader in the majority.