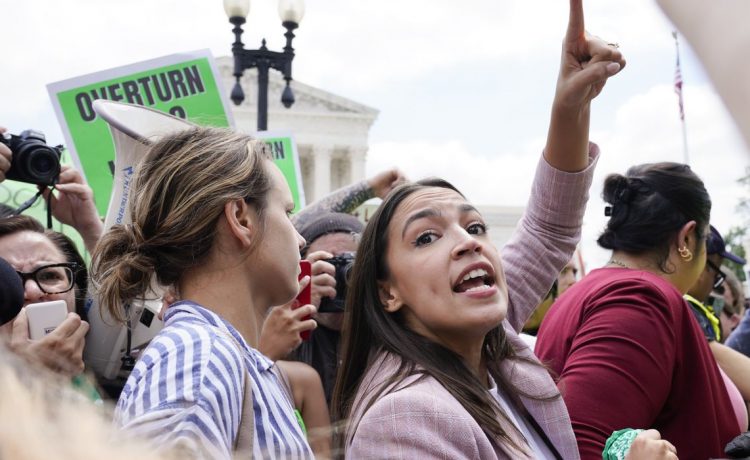 Rep. Alexandria Ocasio-Cortez isn’t just yelling from the rooftops about the Green New Deal and combating a warming planet — she’s getting bills passed.

Ms. Ocasio-Cortez is batting .500 on climate change legislation she authored, with 4 of the eight measures clearing the Democrat-run House since she arrived in Washington in 2019. Her high success rate, however, mostly comes from items passed as part of President Biden’s ill-fated $1.75 trillion social welfare and climate package last year.

The New York Democrat has seen one of her climate change spending measures survive the Senate to become law. And a handful of her other climate-related bills are still in the mix in the House.

Ms. Ocasio-Cortez, a member of the group of young, far-left House lawmakers known as “The Squad,” has also signed her name onto dozens of environmentalist and climate change bills introduced by her Democratic colleagues.

Together, the actions she supports would fundamentally transform U.S. energy consumption in ways that critics argue are unrealistic.

Still, the Bronx-bartender-turned-congresswoman has followed through on her green agenda since she first rattled the political world in 2018 by unseating a powerful Democratic incumbent to become, at age 29, the youngest woman ever to serve in Congress.

Climate change was a pillar of her campaign, and environmentalists view Ms. Ocasio-Cortez as one of their strongest allies.

She has a 96% lifetime score with the League of Conservation Voters for having one of the most pro-environment voting records. Since 2019, the climate group has scored three of her votes as anti-environment, thus dinging her overall rating slightly.

“Rep. Ocasio-Cortez vowed to be a climate champion when she stepped foot onto Capitol Hill, and not only is she delivering on that promise, she’s bringing the establishment along with her,” said Cassidy DiPaola, spokesperson for the non-profit climate activist group Fossil Free Media. “More importantly, Rep. Ocasio-Cortez is showing others in Congress that climate is a winning issue.”

Republicans, and even some Democrats, view her climate proposals as unrealistic and too far-reaching.

The American Conservation Coalition, a conservative environmental group, praised Ms. Ocasio-Cortez for the spotlight she’s cast on climate issues but argued she needs to alter her strategy if she wants to score meaningful legislative achievements. That includes more focus on nuclear energy and conservation efforts — items that typically garner GOP support — rather than policies like the Green New Deal.

“We definitely recognize the work that she’s done for the climate movement, but we wish she would take a more bipartisan and pragmatic approach to these issues rather than push for the extremes on climate policies,” said ACC spokesman Karly Matthews. “The progressive environmental movement often makes the mistake of making perfect the enemy of good.”

Ms. Ocasio-Cortez’s office did not respond to a request for comment for this story.

Since arriving in Congress, she has pushed for the Green New Deal, a multitrillion-dollar piece of legislation that sets ambitious greenhouse gas reduction goals with a swift phase-out of fossil fuels in exchange for renewables. The bill remains stalled.

She and Sen. Ed Markey, Massachusetts Democrat, re-introduced the Green New Deal last year. The duo first unveiled it during the previous Congress in February 2019.

Ms. Ocasio-Cortez has enjoyed modest success on other fronts of the climate change fight.

Her lone environmental bill that became law was a $795,000 funding request in a spending bill passed earlier this year. The pot of money, which Democratic Rep. Thomas Suozzi of New York also advocated for, will provide training for offshore wind jobs at the State University of New York Maritime College in the Bronx.

Included in Mr. Biden’s climate and social spending package, which passed the House last year but ran aground in the Senate, were three of her climate initiatives.

The first would have created the Civilian Climate Corps, a $30 billion program to conserve public lands, generate green jobs and help communities respond to climate change and reduce carbon emissions.

The second was the Green New Deal for Public Housing Act, a $65 billion initiative that would have focused on energy efficiency upgrades and workforce development for public housing.

Other climate legislation that she has authored — but failed to pass — during her tenure includes a ban on fracking for oil and natural gas, and the Climate Equity Act, which would have required a climate and environmental justice analysis on the impact of environmental bills on marginalized communities.

Along with other Democratic colleagues, Ms. Ocasio-Cortez co-authored the Green New Deal for Cities Act that would allow states, cities and tribes to receive federal funding for Green New Deal projects, such as pollution clean-up and climate adaptation measures. Eligible communities must commit to zero emissions by 2030.

Allocated in the bipartisan infrastructure bill that Mr. Biden signed into law last year was $7.5 billion for the same sort of nationwide EV charging station network. The administration has already begun to set rules and standards for how states can use the money to work toward establishing half a million of them from coast to coast.