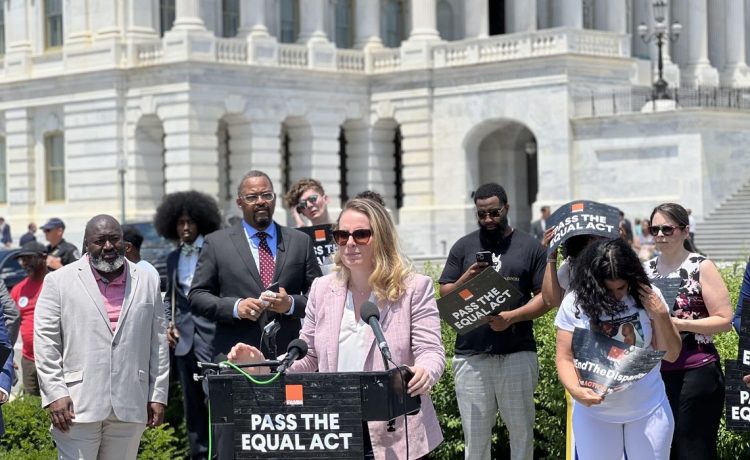 Supporters of new drug-sentencing standards that could lead to the release of potentially thousands of nonviolent offenders rallied outside the Capitol Wednesday to urge the Senate to approve the stalled Equal Act.

Backers say the bill will eliminate sentencing disparities for federal crack and powder cocaine convictions — disparities that, according to the measure’s supporters, disproportionately punish minorities.

Initially, sentences for crack cocaine were 100 times those for powdered cocaine; currently, the disparity is 18-to-1.

The legislation passed the House 361-66, but advocates fear the bill will get sidetracked in a busy summer session before senators head home to hit the campaign trail in the fall.

Wednesday’s rally drew relatives of those incarcerated as well as former inmates who benefited from earlier releases.

Orrin Jackson, a former federal inmate sentenced to 98 years for crack cocaine-related offenses, said he was a beneficiary of the 2018 First Step Act signed by former President Trump. The new legislation expands on the changes implemented in the 2018 law.

Jackson said when he left prison after 31 years, he vowed to remember those “still suffering from the same sentences.”

According to the United States Sentencing Commission, the Equal Act could lead to sentencing reviews for more than 7,600 federal prisoners.

“Pursuing justice that reflects God’s heart is not optional, it’s at the center of the Christian life,” said Heather Rice-Minus, senior vice president of advocacy at Prison Fellowship, which she described as the nation’s largest nonprofit serving prisoners.

Ms. Rice-Manus said sentencing disparities between powder cocaine and crack cocaine — resulting in longer sentences for the latter  — represent the type of “dishonest scales” the Bible condemns in the book of Proverbs.

“We’re looking for accurate weights, ones that do not just disproportionately affect our brothers and sisters from communities of color,” she said.

“When individuals experience a just punishment, they’re more likely to use their time behind bars positively, responsibly, and they’re going to leave better prepared to step into a second chance to fulfill their God-given potential,” Ms. Rice-Manus added. “That means safer streets for every community in America.”

The Prison Fellowship executive was the only speaker at the event, but the bill has also been endorsed by Catholic Charities USA, National Latino Evangelical Coalition, Ethics and Religious Liberty Commission, National Association of Evangelicals and the Catholic Prison Ministry Coalition.

Rep. Hakeem Jeffries, New York Democrat, said the quest to bring equity to those imprisoned longer for crack cocaine crimes “is not a partisan issue. This is an American issue, to fix our broken criminal justice system, to deal with mass incarceration as an epidemic, which has been with us now for 50 plus years, [since the] failed war on drugs started in 1971.”