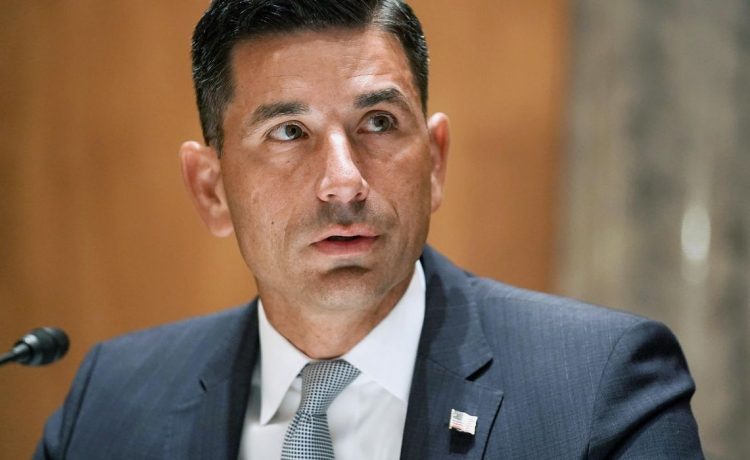 Former acting Homeland Security Secretary Chad Wolf laid out a case for impeaching his successor to The Washington Times, saying Alejandro Mayorkas violated his duty to carry out the laws Congress wrote by exempting whole categories of illegal immigrants from the threat of enforcement action.

Asked to grade Mr. Mayorkas, who took over for Mr. Wolf in the change from the Trump to Biden administrations, he didn’t hesitate.

“Oh, it’s an ‘F’,’” Mr. Wolf said on the latest edition of The Times’ “Politically Unstable” podcast. “I don’t know how you look at any of the metrics out there and say it’s a passing grade.”

He said it’s up to Congress to make decisions on impeachment, but he said lawmakers who want to go that route “have a very strong case.”

“Your job is to enforce the laws as Congress has written,” Mr. Wolf said. “There’s a number of things Congress has told you to do, and if you say, ‘I’m not going to do that because I have limited resources and I’m just going to exempt whole [categories of] people from that,’ I would say that’s a good case of you’re ignoring the law.”

He added: “They actually said this: “If you come across the border illegally, that alone is not a basis for removal.” You basically just said breaking a federal law means you’re not going to be removed, even though it says you should be removed.”

Mr. Wolf ascended to acting secretary at Homeland Security in November 2019, serving until the end of the Trump administration, although Democrats argue he was illegally installed in the post. After a brief stint by another interim secretary at the start of the Biden administration, Mr. Mayorkas took over on Feb. 2, 2021.

Mr. Wolf told The Times he had one conversation with Mr. Mayorkas during the transition, but the newcomers seemed more interested in dismantling anything that had the Trump label on it.

The winner in all of that, Mr. Wolf said, is the cartels who control the smuggling of people and drugs across the boundary.

“They have more money, more territory, and more power than they have ever had in the history of cartels,” Mr. Wolf said.

And that’s one reason why he disputes Mr. Mayorkas’s insistence that white nationalism is the more prominent threat to the homeland.

“It’s not the No. 1 threat facing the homeland, which is how this administration talks about it. It’s just not. There’s foreign terrorist organizations, China, there’s a variety of — I would even say the cartels, at this point, of what’s going on, are endangering more Americans on a day-to-day basis than white nationalists ever did.”

He said the money made off smuggling people is pumped into fentanyl production, where record seizures this year signal record flows that are getting through.

“That’s killing Americans every single day, much more than, unfortunately, these random incidents, which are bad enough, I’m not trying to downplay that,” Mr. Wolf said. “But when you have 100,000 or so overdose deaths, the vast majority of that — I’d say 90% of that — is coming across the southern border, why wouldn’t you say that’s what we need to focus our resources on.”

Asked to guess as to the Biden administration’s thinking behind its policy changes, Mr. Wolf said he thinks politics is part of it.

“At some end point someone in the White House thinks it’s going to be advantageous to them politically at the end of the day, and I think they’re wrong on that,” he said. “I think it’s all these folks that we’re allowing in, allowing them to stay here, that somehow they’re going to support us in future elections.”

An NPR/Ipsos poll released earlier this month found a majority of Americans surveyed believe the U.S. is “experiencing an invasion” along its southern border.

There’s a movement among some former Trump officials to push border-state governors to declare an invasion, flexing powers the Constitution grants to states to “engage in war” when they have been invaded.

Mr. Wolf said he agrees with the idea in principle, but he said there are “really practical issues” that would need to be worked out, such as liability protection for state law enforcement or the National Guard, and logistics of how migrants could be transferred back across the border.

“I think it is an invasion; now there’s a lot of tricky questions to answer,” Mr. Wolf said.