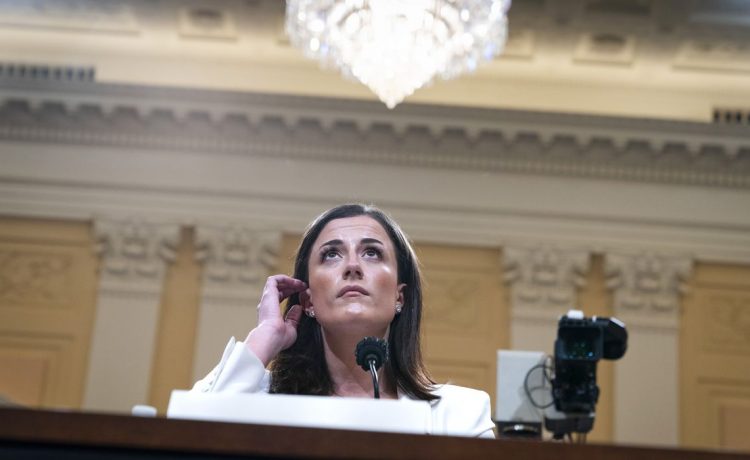 President Donald Trump was so unhinged about losing the 2020 election that he got into a physical altercation with his top Secret Service agent, threw his lunch against a wall and demanded that armed supporters be allowed to attend his final rally before marching on the Capitol, the star witness of the House Jan. 6 committee testified Tuesday.

Cassidy Hutchinson, a Republican who served as top aide to Trump White House Chief of Staff Mark Meadows, gave the House select committee a behind-the-scenes view of the West Wing in the frantic days and hours leading up to the Jan. 6, 2021, riot by a pro-Trump mob at the Capitol.

She described a president increasingly desperate to overturn Joe Biden’s victory, and advisers who were unable or unwilling to dissuade Mr. Trump from what they considered his reckless course of action.

Ms. Hutchinson’s testimony was sometimes based on hearsay, as when she relayed the story of Mr. Trump fighting with his primary Secret Service agent, Robert Engel, on Jan. 6, 2021. She said another White House colleague told her about the confrontation, which occurred in the presidential vehicle after Mr. Trump left the infamous “Stop the Steal” rally near the White House.

Mr. Trump wanted to accompany his supporters to the Capitol, where he hoped to convince Vice President Mike Pence to reject electoral votes from contested swing states as Mr. Pence presided over the constitutionally required count in Congress. But Mr. Engel informed Mr. Trump that they were taking him back to the White House, a decision that enraged the president.

“The president said something to the effect of, ‘I’m the f—ing president. Take me up to the Capitol now,’” Ms. Cassidy quoted Mr. Trump as saying. She said the president reached forward from the back seat and tried to grab the steering wheel.

Mr. Engel grabbed the president’s arm, she said, and told Mr. Trump, “Sir, you need to take your hand off the steering wheel.”

She said the president responded by using his free arm to try to grab his agent by the throat.

The incident had not been reported in a multitude of “tell-all” books about the Trump White House. Mr. Trump dismissed Ms. Hutchinson and her testimony on Tuesday, calling her a disgruntled former staffer who unsuccessfully sought to work for him in Florida after he left office.

“Why did she want to go with us if she felt we were so terrible?” Mr. Trump wrote on Truth Social. “I understand that she was very upset and angry that I didn’t want her to go, or be a member of the team. She is bad news!”

The former president refuted her claims about his behavior, including the episode where he threw his lunch in anger against a wall in the White House dining room, or that he tried to choke a Secret Service agent.

“Her Fake story that I tried to grab the steering wheel of the White House Limousine in order to steer it to the Capitol Building is ‘sick’ and fraudulent,” Mr. Trump said.

He also denied urging the Secret Service to get rid of magnetometers at his rally before the riot. He said his supporters were not carrying weapons.

“I didn’t want or request that we make room for people with guns to watch my speech,” Mr. Trump said. “Who would ever want that? Not me! Besides, there were no guns found or brought into the Capitol Building … so where were all of these guns? But sadly, a gun was used on Ashli Babbitt [a supporter fatally shot by Capitol police], with no price to pay against the person who used it!”

Mr. Trump also called Rep. Liz Cheney, Wyoming Republican who is vice-chair of the committee, “disgraceful” for not playing the part of his rally speech where he asked demonstrators to march to the Capitol “peacefully and patriotically.”

Ms. Cheney and Committee Chairman Bennie Thompson, Mississippi Democrat, praised Ms. Hutchinson for her “courage” in testifying. They used the hastily scheduled hearing to pressure Mr. Meadows, who has refused to testify.

Ms. Hutchinson testified that Mr. Meadows warned her in the days ahead of the riot that the pro-Trump gathering in Washington on Jan. 6 “might get real, real bad.” She also said Mr. Meadows sought a pardon, along with Trump lawyer Rudolph Giuliani, in connection with the Jan. 6 episode.

Ms. Cheney also said the committee is examining possible witness tampering, saying an unknown ally or allies of Mr. Trump have contacted witnesses ahead of their testimony.

Ms. Hutchinson said she was “disgusted” by Mr. Trump’s tweet during the riot on Jan. 6 that accused Mr. Pence of lacking the courage to challenge the election results.

“As a staff member… I remember feeling frustrated,” she said. “As an American, I was disgusted. It was unpatriotic. It was un-American.”

At the time on Jan. 6, 2021, some in the pro-Trump crowd were chanting “Hang Mike Pence!” Mr. Pence and his family were hiding with his security detail in the Capitol.

Republicans pushed back on the revelations by Ms. Hutchinson as “hearsay,” and questioned the legitimacy of the hearing and committee.

“Why isn’t the January 6th committee informing the American people about how many times President Trump asked for the National Guard to be at the Capitol on Jan 6th?” tweeted Rep. Marjorie Taylor Greene, Georgia Republican. “Why was [President] Trump’s NG requests denied with all the known intelligence reports leading up to the 6th???”

Testimony showed that several top officials, including House Minority Leader Kevin McCarthy and Mr. Cipollone, virtually begged White House aides in the days leading up to Jan. 6 not to allow the president to visit the Capitol for the Electoral College vote certification. Mr. Cipollone warned that if Mr. Trump did so, it would risk criminal charges such as obstruction of justice, inciting a riot or defrauding the Electoral College count, Ms. Hutchinson said.

Ms. Hutchinson’s testimony also laid out other moments where Mr. Trump let his anger manifest in a physical nature.

The former staffer said Mr. Trump threw his lunch against the wall at the White House after news reports quoted then-Attorney General Bill Barr saying there was no significant voter fraud in the 2020 election. She said a White House valet showed her the aftermath of Mr. Trump tossing his lunch plate.

“I first noticed ketchup dripping down the wall, and there was a shattered porcelain plate on the floor,” she said. “The valet had articulated [that] the president was extremely angry at the attorney general’s AP interview and had thrown his lunch against the wall.”

— Dave Boyer contributed to this report.