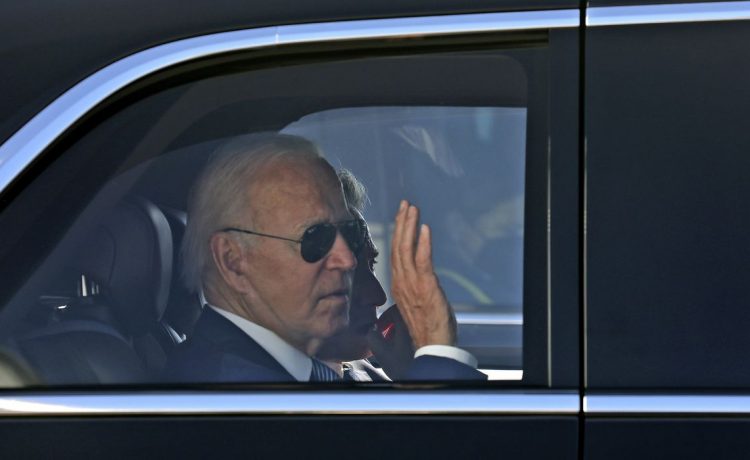 Washington’s leaders are old, and voters are beginning to notice.

A new poll found that 64% of registered Democratic voters don’t want Mr. Biden to run for office again, and a significant number say he’s too old.

“A third of them volunteered it was because of Biden’s age,” Steve Greenberg, a pollster for Siena College Research Institute, which conducted the poll, told The Washington Times. “That was a fill-in-the-blank. That was not a choice.”

Age was cited as the reason Mr. Biden should not run again by a whopping 60% of Democrats aged 65 and over, and a third of all those between the ages of 30 and 64. Among voters under the age of 29, the president’s age was cited by 14%.

At 79, Mr. Biden, the oldest person ever elected to the White House, is hardly the most elderly political leader in the nation’s capital.

In fact, he’s younger than many leading lawmakers in Congress.

House Speaker Nancy Pelosi, a California Democrat, is 82, Senate Minority Leader Mitch McConnell, a Kentucky Republican, is 80, while the Senate’s president pro tempore, Patrick Leahy, who is third in line to the presidency, is 82.

Alabama Republican Sen. Richard Shelby, the ranking member of the powerful appropriations committee and a key negotiator on all major spending deals, is 88.

Overall, a third of current lawmakers in the U.S. Senate and 20% of those serving in the House are over the age of 70.

Some are planning to retire, including Mr. Leahy, a Vermont Democrat who in addition to his role as president pro tempore, is chair of the House Appropriations Committee. He has been absent from the Senate after breaking his hip last month.

Sen. James Inhofe, an Oklahoma Republican who at 87 is the ranking member on the Senate Armed Services Committee, is also retiring.

Democrats are assuming Sen. Dianne Feinstein, 89, won’t seek re-election in 2023 following public concerns expressed about her noticeable cognitive decline. But the California Democrat hasn’t announced her plans and now that Mr. Leahy is leaving, she’ll succeed him to become third in line to the president if Senate Democrats hold onto the majority in the November election.

Sen. Chuck Grassley, an Iowa Republican, is running for an eighth Senate term at the age of 88. If he wins, Mr. Grassley will be 95 at the end of his ninth term.

Iowa voters are not particularly concerned about his age, Republican strategist and Grassley biographer Eric Woolson said in an interview.

“I think they are comfortable with his stamina,” Mr. Woolson, who is also a former Grassley spokesman, said.

Mr. Grassley visits all 99 Iowa counties every year and is known for his 4 a.m. jogs, six days a week.

“I think he’s done quite a bit, especially in the last eight to ten years, to mitigate the age issue and he’s certainly as sharp as he has ever been throughout his career. So, I think he may be the exception to the rule in terms of voters.”

A poll conducted last week for the Franken campaign found Mr. Grassley leading by only 5 points. His advantage shrunk to a single point when voters in the poll were presented with each candidate’s biographical statements, including information about Mr. Grassley’s entry into elected politics in 1959, two years after Mr. Franken was born.

In the House, younger Democratic lawmakers have been increasingly impatient about moving into leadership positions held for decades by a team of now-octogenarians.

“The internal dynamics of the House has made it such that there is very little option for succession,” Rep. Alexandria Ocasio-Cortez, 32, a member of the “Squad” of newcomer liberal Democrats, told The Intercept in 2020.

Mrs. Pelosi, along with Majority Leader Steny Hoyer, 83, and Majority Whip Jim Clyburn, 81, have no official plans to step aside in the next Congress.

“We have to be very, very careful,” Mr. Clyburn, who has been a member of the Democratic leadership team since 2003,  told The Washington Post earlier this year. “There has to be a healthy balance of strength and experience.”

Mrs. Pelosi, who is serving her fourth term as speaker, pledged privately to her caucus four years ago that she would not run for Democratic leader again after 2022.

But Mrs. Pelosi announced in January she would seek a 19th term representing her San Francisco district in Congress, prompting new questions about her leadership plans.

When asked whether she would run for speaker after the 2022 midterm elections if Democrats maintain the majority, Mrs. Pelosi would not commit to stepping aside.

“That’s not a question,” Mrs. Pelosi told ABC News in February.  “My purpose right now is just to win that election. Nothing less is at stake than our democracy.”

A Morning Consult/Politico poll taken shortly after Mrs. Pelosi’s re-election announcement found fewer than half of Democratic voters wanted her to remain the leader of the House Democrats.

If Mrs, Pelosi and her top deputies do move aside, waiting in the wings are a new generation of decades-younger lawmakers who are viewed as possible contenders for the leadership ranks.

The Senate and House each have a long history of lawmakers growing old in office.

Sen. Strom Thurmond remained on the job until he was 100 years old, but like other colleagues who refused to leave office, he began to decline both physically and cognitively in his final years.

Sen. Thad Cochran, a Mississippi Republican, struggled in his old age to run the Senate Appropriations Committee before he finally resigned in 2018 at the age of 80 following four decades in Congress.

Other lawmakers stick around until they die in office.

This year, Reps. Don Young, an Alaska Republican, died at 88. Florida’s Alcee Hastings, a Florida Democrat, passed away from cancer last year at age 84 after an extended absence from the House.

Dr. Michael T. Ullman, a professor in the Department of Neuroscience and director of Georgetown University Medical Center’s Brain and Language Lab, said aging politicians can have some advantages over younger ones.

“Some aspects of cognition decline with age, some remain stable and some improve,” Dr. Ullman said. “So it’s not all downhill.”

Dr. Ullman said older people tend to be more knowledgeable and have more self-control and better self-regulation, though the speed of processing information and some ability to recall information declines.

“I think someone who’s younger, who might be impulsive and make wrong decisions, that’s probably a lot more dangerous than someone who’s a little bit slower and making good decisions,” Dr. Ullman said.