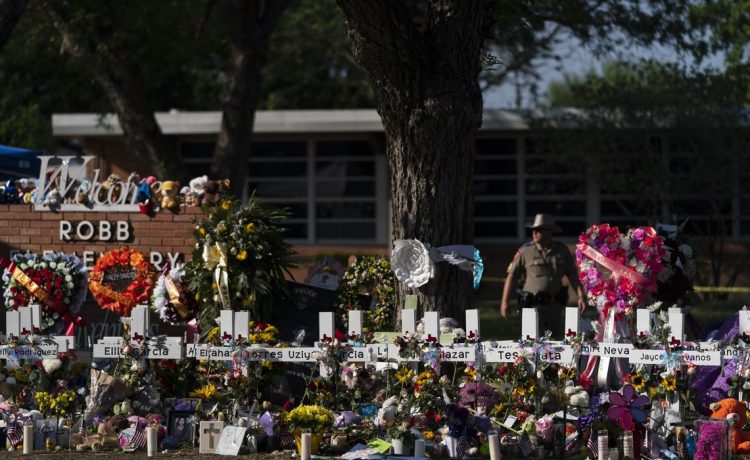 The families of three students who survived the Uvalde school massacre have filed the first federal lawsuit in the tragedy, seeking damages from the school district, the city, police officials and gun suppliers in the mass shooting in Texas.

The complaint filed Wednesday in the U.S. District Court for the Western District of Texas accuses the Uvalde Consolidated Independent School District, the principal of Robb Elementary School, the city of Uvalde and law-enforcement officials of “significant failures” and firearms companies of “negligence, recklessness, and nuisance allegations.”

Texas attorney Stephanie Sherman said the families seek justice and accountability for the “cascade of glaring failures that led a deranged young man to freely enter school grounds and use weapons of war to murder kids and teachers while hundreds of law enforcement officers stood back and did nothing.”

“The horrors of May 24, 2022, were only possible because so many in positions of power were negligent, careless and reckless,” said Ms. Sherman of the Los Angeles-based Baum Hedlund Aristei & Goldman law firm.

The shooting at Robb Elementary, the third deadliest school shooting in U.S. history, left 19 children and two teachers dead. The gunman, 18-year-old Salvador Ramos, was shot and killed by a tactical unit about an hour after barricading himself in a classroom.

Baum Hedlund has filed the first federal #lawsuit on behalf of 3 families in response to the #Uvalde school shooting. Defendants include the school district, law enforcement and gun makers. Read the details here: https://t.co/8WDLOJ6YVy pic.twitter.com/pGG8DtWX37

The firearms companies named in the lawsuit are Daniel Defense and Firequest International. Oasis Outback, the store at which the shooter bought guns and ammunition, also is being sued.

Gun manufacturers are protected in most cases from liability under federal law, but at least two have agreed to settlements in recent years after being sued by families of mass shooting victims.

In February, Remington reached a $73 million settlement with the families of nine victims in the 2012 Sandy Hook massacre. The company filed for bankruptcy in 2018 and 2020 in part because of restrictions placed on retail firearms sales in the aftermath of school shootings.

In 2004, Bushmaster Firearms and Bull’s Eye Shooter Supply agreed to pay a combined $2.5 million to the families of the victims in the 2002 Washington, D.C., sniper case.

The federal complaint submitted Wednesday may be only the beginning of the Uvalde litigation. Last month, California civil-rights attorney Charles Bonner filed a notice of claim for an upcoming $27 billion class-action lawsuit for the victims of the Uvalde shooting.