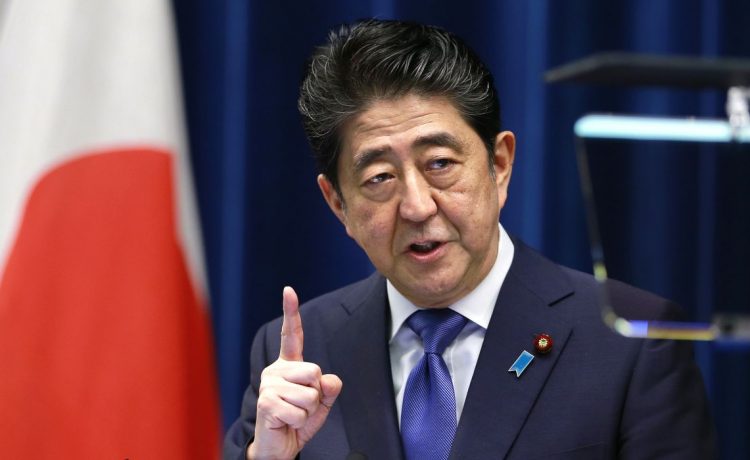 KUALA LUMPUR, Malaysia (AP) — Friday’s shocking assassination of Japan’s former Prime Minister Shinzo Abe in one of the world’s safest country stunned the world and drew condemnation, with Iran calling it an “act of terrorism” and Spain slamming the “cowardly attack.”

Abe, 67, was shot from behind in Nara in western Japan while giving a campaign speech. He was airlifted to a hospital but was not breathing and his heart had stopped. He was pronounced dead later at the hospital. Abe was Japan’s longest-serving leader before stepping down in 2020 for health reasons. Police have arrested a suspected gunman at the scene.

Japanese Prime Minister Fumio Kishida, who hastily returned to Tokyo from campaign events around the country, called the shooting “dastardly and barbaric.”

“I’m praying for former Prime Minister Abe’s survival from the bottom of my heart,” Kishida told reporters at his office.

Spanish Prime Minister Pedro Sánchez sent his best wishes to Abe’s family and “our forthright condemnation of this cowardly attack. “Spain stands together with the people of Japan in these difficult times,” he tweeted.

he Italian government and lawmakers across the political spectrum condemned the shooting, with Premier Mario Draghi’s office expressing solidarity with Abe and the Japanese people.

Matteo Salvini, the leader of Italy’s right-wing League Party, expressed “dismay” at the shooting and urged prayers for Abe in a tweet, calling him a “valiant Japanese statesman.”

And former Premier Giuseppe Conte, head of the populist 5-Star Movement, called Abe an example of a politician committed to serving his country and offered his solidarity with his family and the Japanese people.

People in Japan could be seen reading extra editions of newspapers with Abe’s picture large on the front page, or stopping to watch the news on TV.

NHK public broadcaster aired dramatic footage of Abe giving a speech outside of a train station in the western city of Nara. He is standing, dressed in a navy blue suit, raising his fist, when a gunshot is heard. Footage then shows Abe collapsed on the street.

“We are shocked and saddened to hear about the violent attack against former Japanese Prime Minister Shinzo Abe,” the White House said in a statement. “We are closely monitoring the reports and keeping our thoughts with his family and the people of Japan.”

In the NHK video, security guards are seen leaping on top of a man in a gray shirt who lies face down on the pavement. A double-barreled device that appeared to be a handmade gun is seen on the ground.

Iran condemned the shooting as “an act of terrorism.”

“As a country that has been a victim of terrorism and has lost great leaders to terrorists, we are following the news closely and with concern,” Iran’s Foreign Ministry spokesperson said.

U.S. Secretary of State Anthony Blinken, who is on Indonesia’s Bali island for the Group of 20 rich and developing nations’ foreign ministers meeting, also voiced concern over the attempted slaying of Abe.

“We don’t know his condition. We do know that apparently he’s been shot. Our thoughts, our prayers are with him, with his family, with the people of Japan. This is a very, very sad moment,” he said.

German Foreign Minister Annalena Baerbock wrote on Twitter that she was “shocked by the news that Shinzo Abe was shot. My thoughts are with him and his family.”

Baerbock is due to visit Japan at the weekend to attend a memorial ceremony for the U.S. nuclear attack on Nagasaki and meet with her Japanese counterpart in Tokyo.

New Zealand Prime Minister Jacinda Ardern was visiting her Australian counterpart Anthony Albanese on Friday in Sydney when they learned the news.

Ardern said she was “deeply shocked.”

“He was one of the first leaders I formally met when I became Prime Minister. He was deeply committed to his role, and also generous and kind. I recall him asking after the recent loss of our pet when I met him, a small gesture but one that speaks to the kind of person he is,” Ardern said. “My thoughts are with his wife and the people of Japan. Events like this shake us all to the core.”

Albanese echoed the sentiments in a tweet: “Shocking news from Japan that former PM Shinzo Abe has been shot. Our thoughts are with his family and the people of Japan at this time.”

Leaders across Asia were stunned.

“Deeply distressed by the attack on my dear friend Abe Shinzo. Our thoughts and prayers are with him, his family, and the people of Japan,” Indian Prime Minister Narendra Modi tweeted.

China was “shocked” by the “sudden incident” and hoped Abe will be out of danger and recover swiftly, said Foreign Ministry spokesperson Zhao Lijian.

“Mr. Abe is a good friend of Singapore. I had just hosted him to lunch in May, on my visit to Tokyo. My thoughts and prayers are with Mr. Abe and his family,” Lee said on Facebook.

Philippine Foreign Secretary Enrique Manalo said he learned the news with great shock and dismay. “I extend my deep sympathy and pray for his early recovery,” he said.

Indonesian Foreign Minister Retno Marsudi, who is in Bali as president of the G-20, conveyed the G-20 foreign ministers’ “deepest sympathies and our prayers for the speedy recovery” of Abe.

Malaysian Foreign Minister Saifuddin Abdullah said he was saddened and shocked. “The government and people of Malaysia are praying for his speedy recovery and for his family to be given strength to endure this tragedy,” he tweeted.

Other former world leaders also condemned the appalling attack on Abe, who was the longest serving prime minister in Japan. He led Japan from 2006 to 2007 and again from 2012 before stepping down in 2020 due to poor health.

Former U.S. President Donald Trump said the attack on Abe was devastating. He described Abe as a “truly great man and leader” and said he “was a true friend of mine and, much more importantly, America.”

“This is a tremendous blow to the wonderful people of Japan, who loved and admired him so much. We are all praying for Shinzo and his beautiful family!” Trump said on his social media app.

Former Australian Prime Minister Kevin Rudd said on Facebook that “an attack on any democratically elected political leader in the world is an attack on supporters of democracy everywhere.”

Two other former Australian Prime Ministers, Tony Abbott and Malcolm Turnbull, reacted in disbelief. Abott called it a “shocking act of violence” and Turnbull said he was horrified. They both expressed hope and prayers that Abe will pull through.

“May God bless him with a full recovery,” he said.