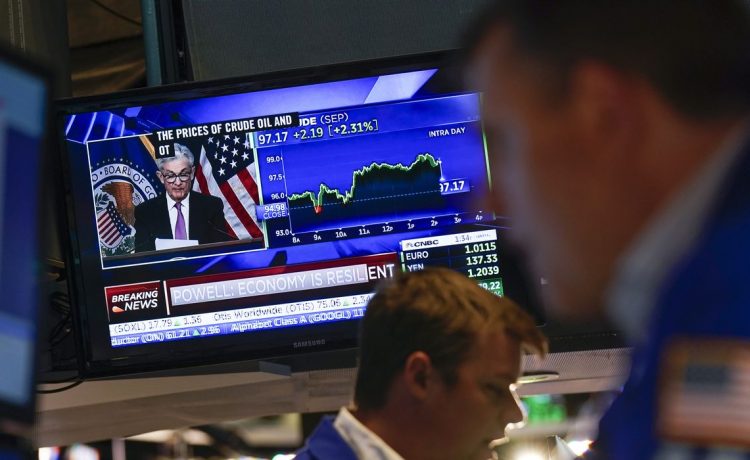 The Federal Reserve raised a key interest rate again by three-quarters of a percent on Wednesday to contain soaring inflation, but Fed Chairman Jerome Powell said he doesn’t see evidence of a recession and suggested that future rate increases will be smaller.

Stocks soared on the development.

The Fed announced the fourth increase in the central bank’s benchmark borrowing rate since March to tamp down inflation that reached an annual rate of 9.1% in June. It’s the highest inflation in 41 years.

The rate increase to a range of 2.25% to 2.5% is the highest level since 2018. It will result in hikes in rates for everything from credit card, home equity and auto loans to business loans, with mortgage rates expected to also rise. Mortgage rates had climbed to about 5.5% this year even before the Fed’s latest action, after averaging 3% in 2021.

Mr. Powell said the central bank expects some “softening” in the job market and slower overall growth as a result of its moves. He said there are also slight indications that consumers are cutting back on spending.

But Mr. Powell also pointed to the unemployment rate at a 50-year low of 3.6% as evidence that the U.S. economy isn’t tipping into a recession.

“I do not think the U.S. is currently in a recession,” Mr. Powell told reporters after the Federal Open Market Committee announced the latest rate hike. “There are just too many areas of the economy that are performing too well. This is a very strong labor market. It doesn’t make sense that the economy would be in recession with this kind of thing happening.”

But asked for his definition of a recession, Mr. Powell retreated a bit.

“The Fed doesn’t make a judgment on that,” he said. “We won’t reach a conclusion one way or another on that.”

Data on the second-quarter gross domestic product will be released by the federal government on Thursday. The economy shrank slightly in the first quarter, and some economists’ informal definition of recession is two straight quarters of negative growth.

But the National Bureau of Economic Research, a nonprofit group of economists, declares official economic downturns using indicators beyond GDP growth or decline.

Mr. Powell and White House officials note that other factors such as broad-based industrial performance are considered in determining whether the U.S. is officially in a recession.

With the midterm elections just over three months away, President Biden is deeply unpopular as inflation and gasoline prices have risen steadily since mid-2021. Congressional Democrats are girding for heavy losses in November.

Investors appeared to be buoyed Wednesday when Mr. Powell said that Fed officials believe the current funds rate is “right in the range of neutral.” He also didn’t commit to the size of another rate hike when the Fed’s rate setting committee meets again in September.

“We’re getting close to where we need to be,” Mr. Powell said.

Investors had expected the rate increase, but stocks jumped immediately after Mr. Powell’s comments. The Dow Jones Industrial Average rose 436 points, or 1.3%, to close at 32,197 points.

In its statement, the open market committee said it is weighing a variety of conflicting economic data.

“Recent indicators of spending and production have softened,” it said in a statement. “Nonetheless, job gains have been robust in recent months, and the unemployment rate has remained low. Inflation remains elevated, reflecting supply and demand imbalances related to the pandemic, higher food and energy prices, and broader price pressures.”

It said Russia’s war against Ukraine “is causing tremendous human and economic hardship.”

“The war and related events are creating additional upward pressure on inflation and are weighing on global economic activity,” it said.

If the economy shows more signs of slowing by September, the Fed could reduce the size of its rate increases, possibly to a half-point. Along with smaller potential hikes in November and December, the Fed’s short-term rate could rise to 3.25% to 3.5% by year’s end, which would be the highest level since 2008.