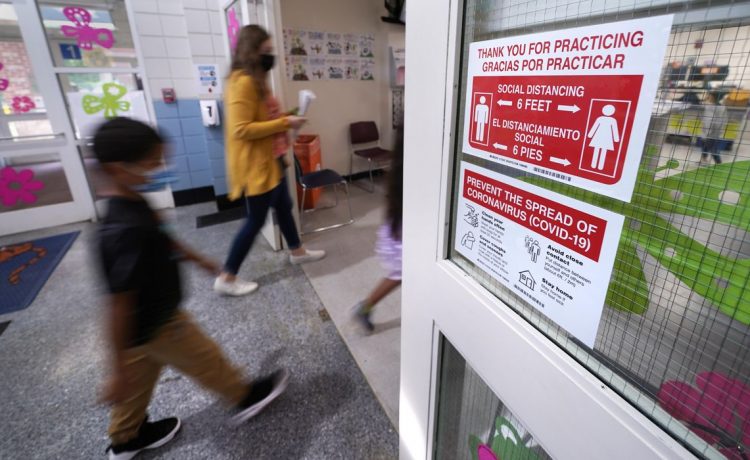 U.S. students are struggling even though the government sent billions in COVID-19 relief money to school districts to offset learning loss, according to a study released Tuesday. The study says the federal largesse fell short, failed to target the schools in greatest need and hasn’t been tied to policy outcomes.

The funds, including about $120 billion tucked into President Biden’s massive virus-relief bill last year, were intended to be used to increase tutoring, offer after-school programs and buy new textbooks, among other measures.

“Despite an extraordinary level of support by the federal government during the pandemic, U.S. schools are still $500 billion short of what’s needed to address unprecedented levels of learning loss,” said Matthew P. Steinberg, an associate professor of education and public policy at George Mason University who wrote the study with Kenneth A. Shores, an assistant professor of education policy of the University of Delaware. “While the investment in [the federal stimulus] was incredible in scale, it pales in comparison to the negative impact on the economy if a generation of children does not recover from what this pandemic has done to them academically.”

The authors looked at prior estimates of learning loss, time spent in remote instruction and the cost of increasing student achievement to reach their findings, which coincide with new data on declining math and reading scores on standardized tests.

The analysis said federal money, which is still being allocated, hasn’t been targeted properly because the money flowed along preexisting funding streams that emphasize convenience instead of policy goals.

Researchers said while overall funding may fall short, the government should fine-tune its requirements or offer incentives before spending more, so the cash goes directly to remediating learning loss.

“This is much more important than using it, for example, for new facilities construction — such as athletic fields — that have little to do with addressing the academic needs of students,” Mr. Steinberg said.

The COVID-19 pandemic set off a historic experiment in “social distancing” that closed offices, businesses and institutions around the globe. The decision to close many schools and rely on remote learning from home was among the most contentious, and educators and policymakers are grappling with the fallout.

Teachers complained that many students failed to pay attention or lacked the equipment needed for remote instruction, while families struggled to balance parental supervision with work life.

A federal report last month showed that 9-year-olds’ reading and math scores plummeted after the start of the pandemic, particularly among Black students.

The National Center for Education Statistics pointed squarely at remote learning and pandemic shocks in disclosing that average math scores for this age group dropped 7 points while average reading scores declined 5 points from 2020 to 2022.

Thomas Kane, of the Center for Education Policy Research at Harvard University, told National Public Radio earlier this year that students in high-poverty areas missed the equivalent of 22 weeks of in-person math instructions during the 2020-2021 school year versus about 13 weeks for students in low-poverty areas, who tended to get back in the actual classroom faster.

At the political level, Republicans generally pushed for the broad reopening of schools during the pandemic, noting the impact on students and the fact COVID-19 did not cause high death rates among young Americans.

Mr. Biden adopted a tougher tone with unions as relief money trickled out and teachers in places like Chicago refused to reenter classrooms while they pushed for stiffer virus controls. He also said schools must use some of the cash to help students catch up.

“States and school districts have the resources they need, and are required to address the impacts of the pandemic on students’ learning,” the White House said in a March fact sheet.

But Tuesday’s analysis said schools need still more money — while also warning there is a lack of adequate oversight when it comes to the money that is being spent.

Analysts said the same problem dogged efforts to bolster learning after the Great Recession, pointing to the lack of studies on the causal effects between federal cash and learning outcomes.

“In the wake of the Great Recession and COVID-19, the federal government has distributed nearly a quarter of a trillion dollars in fiscal support to states and school districts to offset disruptions to district resources and student learning. Surprisingly, very little empirical research has assessed the impacts of these funds to determine whether they accomplished their purported goals,” they wrote.

Some districts got unequal amounts of relief despite having similar economic situations, the researchers found. And while minority students had higher rates of remote learning and tend to face more educational obstacles, common federal and state funding streams do not account for race and ethnicity.

Requiring school districts to report to National Center for Education Statistics how the funds were spent and publishing that data, for instance, would bolster public trust, the researchers wrote.

The researchers said accountability will be crucial if another crisis occurs since the American public might doubt whether critical taxpayer spending on students is needed.

“Given that future crises are likely, it is imperative that policy and accountability structures are developed to document how expenditures are used so that the public can continue to trust that these emergency relief funds should continue to be made available,” they wrote.

The Washington Times reached out to the U.S. Department of Education for comment on the report.

Republicans on the House Oversight Committee sent a letter to Education Secretary Miguel Cardona on Tuesday questioning whether funds were being for “woke initiatives.”

It cited a Massachusetts district that hired a consultant to “coach” a high school principal on how to use a racial slur during a training session on emotional intelligence for education practitioners “in order to tackle its complexity.”

Emails obtained by the committee suggest the usage still made attendees uncomfortable.

“This activity appears to have nothing to do with COVID-19 mitigation. Moreover, under no circumstances should the American people fund the ‘coaching’ of educators to use racial slurs for any purpose and/or at any time,” Rep. James Comer of Kentucky and Rep. Virginia Foxx of North Carolina wrote. “This is both a waste and a misuse of taxpayer dollars.”