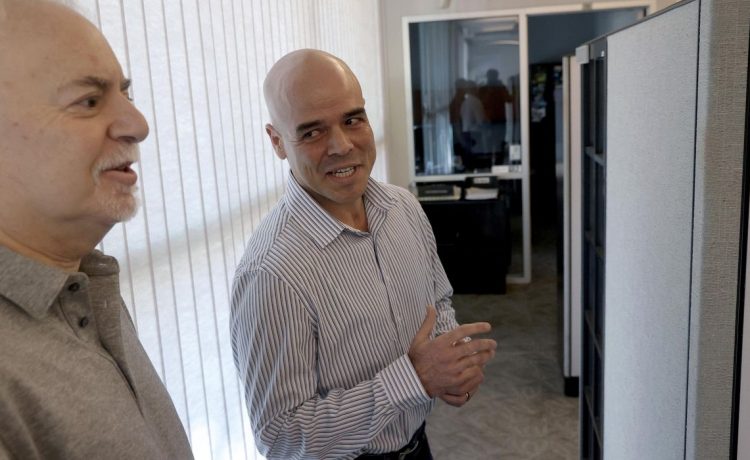 LAS VEGAS — A fight to block government access to a slain investigative journalist’s sources and unpublished work stalled Wednesday when a Las Vegas judge said she didn’t have jurisdiction to consider the question.

However, a lawyer heading efforts by Nevada’s largest newspaper, 43 media organizations and The Reporters Committee for Freedom of the Press promised to ask a state court to prevent police and prosecutors from reviewing records, files and phone calls on the dead reporter’s electronic devices.

Police allege that Robert “Rob” Telles, a Democratic elected county official, waited in a vehicle outside the home of Las Vegas Review-Journal reporter Jeff German and fatally stabbed him on Sept. 2. Prosecutors characterized the attack as a response to German’s articles, which were critical of Telles and his managerial conduct.

“The press relies upon sources to come forward and be able to trust reporters to keep information and their identities confidential in order to share information about all kinds of wrongdoing,” Ashley Kissinger, the attorney representing the Review-Journal and media entities including The Associated Press, said outside court.

Otherwise, Kissinger said, “stories of true importance to the public would not come to light.”

A Review-Journal court filing on Monday argues that police should never have seized German’s cellphone, computers and hard drive. It maintains that confidential information, names and unpublished material should be protected from disclosure under both federal and state law.

“The most damaging potential outcome of this case is the precedent that murdering a journalist will expose the journalist’s work product, source material and confidential contacts to government inspection,” said Glenn Cook, executive editor of the newspaper.

Kissinger said prosecutors and police in Las Vegas have assured the newspaper that detectives have not reviewed material on German’s electronic devices. Defense attorneys are entitled to any material viewed by prosecutors that could be evidence in their case.

Clark County District Attorney Steve Wolfson and Las Vegas police homicide detectives were waiting in the courtroom Wednesday when attorney Matthew Christian, representing the police department, confirmed for Justice of the Peace Karen Bennett-Haron that the devices had not been accessed.

The Review-Journal bid for court intervention notes that German was a crime victim, not a suspect, and proposes a court-appointed “special master” and prosecutorial “taint team” review the devices now held by police and determine what material would be relevant to the criminal case. A 12-point proposal calls for the review to be conducted by parties “from outside the Las Vegas law enforcement and state and federal judicial systems.”

“This court is very limited in what I can do,” Bennett-Haron said at the start of a 14-minute discussion with the attorneys for both sides. She concluded: “I don’t have jurisdiction, OK?”

In the court hallway, attorneys for all sides met informally for about 20 minutes before reaching what Kissinger termed an impasse.

“We will be filing in district court,” Kissinger told reporters.

“Nevada’s strong shield law is intended to protect journalists and news organizations from being forced to disclose exactly the kind of work product and reporter-source communications likely to be found on Jeff German’s electronic devices,” Katie Townsend, of the Reporters Committee for Freedom of the Press, said in a statement.

“Allowing the Las Vegas district attorney, public defender and other government investigators to review this privileged information would profoundly chill the type of vitally important newsgathering and investigative journalism German devoted his life and career to,” Townsend said.

In 44 years as a reporter, first at the Las Vegas Sun and then at the Review-Journal, the Monday court filing noted, German “reported on everything from organized crime and government malfeasance to political scandals and mass shootings.”

“There may not be a single government agency in Las Vegas that he has not written about,” it said.

Telles, 45, became Clark County public administrator in 2019 and lost his Democratic party primary in June, about a month after articles by German documented “turmoil and internal dissension” in Telles’ office. Stories included claims of administrative bullying, favoritism and Telles’ relationship with a subordinate female staffer.

Telles was arrested Sept. 7 at his home and remains jailed pending an Oct. 26 preliminary hearing of evidence before Bennett-Haron determines if he should stand trial in state court.

German, 69, was widely respected for his tenacity and was inducted posthumously last weekend into the Nevada Press Association’s Newspaper Hall of Fame. His colleagues said he had no plans to retire and was working on follow-up reports about Telles and the public administrator’s office when he was killed.

Police said security video shows a man believed to be Telles near German’s home. A prosecutor said German was stabbed and slashed seven times. A judge who reviewed a police report following Telles’ arrest said German had apparent defense wounds on his arms, and DNA believed to be from Telles was found under German’s fingernails.

Wolfson, representing Clark County, is separately seeking a court order to remove Telles from his elected position ahead of the end of his term on Dec. 31. The county administrator handles assets of people who die without a will or family contacts.