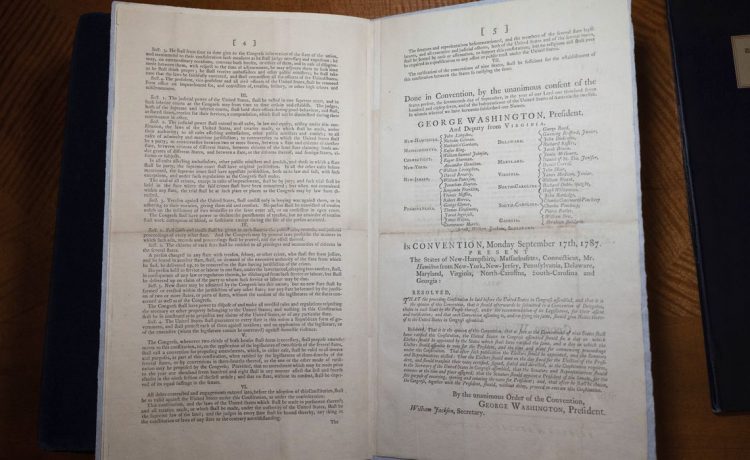 A first-edition copy of the Constitution, one of two in private hands and one of 13 such copies known to exist, is being auctioned off by Sotheby’s on Dec. 13.

The document will be exhibited at the auction house’s location in New York from 10 a.m. to 5 p.m. Mondays through Fridays and 1 p.m. to 5 p.m. on Sundays.

The public display of the Constitution starts Friday, staying on exhibit until Nov. 22 before starting back up again on Nov. 30 until the day of the sale, according to the auction listing.

This copy has not been sold since 1894, when it was purchased at auction as a gift for future businessman and book collector Adrian Van Sinderen, a child at the time of the sale. Its current sales estimate is between $20-30 million, a release from Sotheby’s states.

The other privately owned copy of the first-edition Constitution was sold in November 2021 by Sotheby’s to Citadel founder Kenneth Griffin.

That $43.2 million sale set a new world record for the most expensive printed text item ever sold. Mr. Griffin outbid a crowdfunding effort that raised $40 million for the first-edition Constitution.

“The unprecedented sale result we achieved for the Constitution last November was a truly unique and inspired moment … We hope the remarkable opportunity to acquire one of two privately owned copies of the Constitution will inspire a similar response that galvanized the public last year,” Sotheby’s Global Head of Books & Manuscripts Richard Austin said.