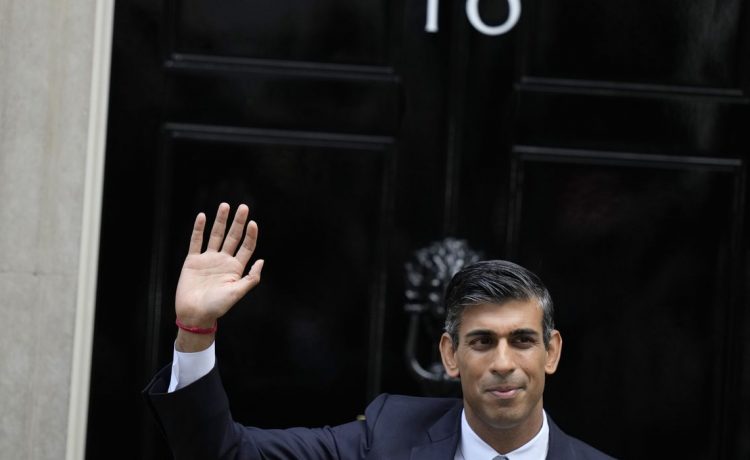 Rishi Sunak, who on Tuesday became first Hindu prime minister in Britain’s long history, will want to be known as a leader “who happens to be Hindu,” one expert told a panel discussion on the milestone appointment Tuesday.

A practicing Hindu, Mr. Sunak reportedly abstains from alcohol and beef and took his oath of office as a member of Parliament with his hand on a copy of the Bhagavad Gita, the Hindu sacred text.

Hinduism is noted for its beliefs in an eternal soul, or atman, and the law of karma, or action, which promises rewards or punishments in the next life for actions in this life. Dharma — virtue — is one of the principal goals of Hinduism, along with artha, or success; kama, pleasure; and moksha, or release from the karmic cycle of rebirth.

On Tuesday, standing outside his office at Number 10 Downing Street, Mr. Sunak alluded to his values as he undertook his new position.

“I know the high office I have accepted, and I hope to live up to its demands, but when the opportunity to serve comes along, you cannot question the moment, only your willingness,” Mr. Sunak said. He added, “I stand here before you ready to lead our country into the future, to put your needs above politics, to reach out and build a government that represents the very best traditions of my party.”

Mr. Sunak has not shied away from acknowledging his faith in public life. On first being named to a Cabinet post by former Conservative Prime Minister Theresa May in 2017, he said, “I am now a citizen of Britain. But my religion is Hindu. My religious and cultural heritage is Indian. I proudly say that I am a Hindu and my identity is also a Hindu.”

After being named chancellor of the exchequer, he told reporters that lighting oil lamps outside his 11 Downing Street residence to mark the Hindu festival of Diwali was one of the “proudest moments” of his life.

While Mr. Sunak may not overly advertise his faith, the impact of Hindu teachings are likely to be apparent, said Akhandadhi Das, director of the Science and Philosophy Initiative, which is connected with the U.S. Bhaktivedanta Institute for Higher Studies.

“I think that Hinduism, at its core, really strives to be universal, to be objective, to be neutral, to see everyone equally,” Mr. Das said. “This isn’t always as it is practiced, or when it’s shown in India, there are certain aspects where it does look rather sectarian at times. But I think that in Britain, there is much more sense amongst committed Hindus, that the Bhagavad Gita calls on them to see equally, to treat equally, to be fair, to be open, to be compassionate and to see oneself as a servant of the community and therefore to extend oneself as best as possible for everyone.”

Mr. Sunak, 42, became leader of the Conservative Party on Monday when the last challenger to his candidacy dropped out. On Tuesday morning, King Charles III asked him to form a government and serve as prime minister.

The RMC panelists said Mr. Sunak’s status as a “person of color” to the job would matter more in British society than his faith.

Almost all British prime ministers have been members of the Church of England, although their commitment and church activity have varied. Benjamin Disraeli, who served under Queen Victoria, was the first national political leader of Jewish heritage, while in more recent years, Tony Blair, a Labor prime minister, was converted to Catholicism after his premiership ended.

Boris Johnson, who stepped down as prime minister this summer after Mr. Sunak raised political objections to his leadership, is also a Roman Catholic.

It’s what Mr. Sunak’s achieves while in office, not his faith practices, that will resonate most in Britain, one scholar said.

“To the extent that he is able to invoke a sense of identification with people of his ancestral religious tradition, I think Sunak will be seen as more important to Hindus in all that diversity in this country, let alone in India or around the world than might perhaps be borne out by the actual political contingencies which he faces,” said Chakravarthi Ram-Prasad, a distinguished professor of religion at Lancaster University.