Flashes of Arab unity at World Cup after years of discontent 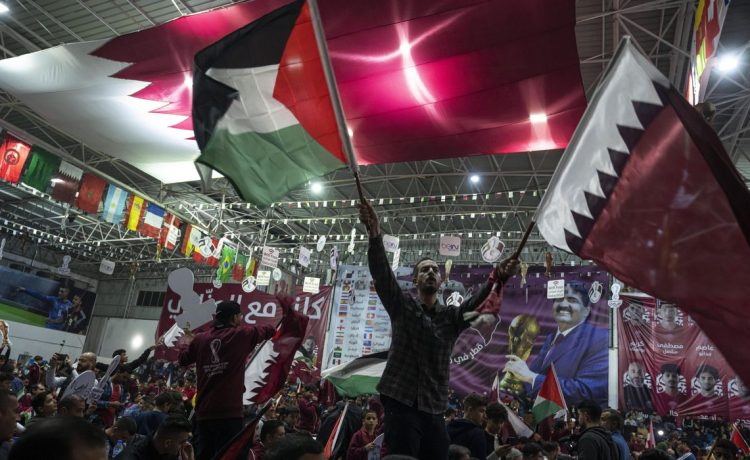 DOHA, Qatar — For a brief moment after Saudi Arabia’s Salem Aldawsari fired a ball from just inside the penalty box into the back of the net to seal a World Cup win against Argentina, Arabs across the divided Middle East found something to celebrate.

Such Arab unity is hard to come by and fleeting when it arrives. But Qatar’s hosting of the World Cup has provided a moment where many in the Arab world have rallied by Doha and the Saudi team’s win.

Whether that momentum continues will be tested on Saturday as Saudi Arabia faces Poland – and as regional tensions, religious differences and renewed economic competition between countries resume.

“All Arabic countries are celebrating because one Arab team won,” said 27-year-old Saudi Rakan Yousef after Arab fans congratulated him in Doha, Qatar, on the Green Falcons’ win. “Even the emir of Qatar attended our match. … There’s this feeling now that we are all brothers. That’s why I’m speechless.”

The Arab world’s division start even with the Arabic language.

Spoken Arabic changes regionally, with the Berber-infused Arabic of North Africa, the rapid-fire Egyptian heard in movies and television comedies, the soft Levantine drawl and the guttural dialect of the Gulf Arabs.

PHOTOS: Flashes of Arab unity at World Cup after years of discontent

Religion is another differentiator – there are Muslims, both Sunni and Shiite with subgroups within, and minority Christians, Druze, Baha’i and others. Different views on religion and regional rivalries bleed into conflicts, such as the ongoing war in Yemen.

But despite an attempt by al-Qaida to stir up extremists, the monthlong World Cup in energy-rich Qatar so far has seen unity among the Gulf Arab nations. Saudi Crown Prince Mohammed bin Salman and Egyptian President Abdel Fattah el-Sissi, the heads of state in two countries that only some two years ago had boycotted Qatar, attended the tournament’s opening match.

Dubai’s ruler, Sheikh Mohammed bin Rashid Al Maktoum, called Qatar’s hosting of the tournament “a milestone for all Arabs” and also attended the opening. That feeling was shared by others as well.

“We are proud to be here for the first World Cup in an Arabic country,” Morocco coach Walid Regragui said.

But the biggest surprise came two days later as Saudi Arabia stunned Argentina by winning their opener in the tournament, with Aldawsari doing a cartwheel and a flip. Qatar’s ruling emir, Sheikh Tamim bin Hamad Al Thani, attended the match and wore a Saudi flag around his shoulders.

One veteran Saudi sports journalist, Majed al-Tuwaijri, even wept on air after the match.

“This is the most beautiful and important moment in my life and my 30-year media career,” he said, his voice choking up. “I find myself failing to express myself because of the complexity of my feelings toward this great historical victory.”

Saudi Arabia’s King Salman declared Wednesday a public holiday to commemorate the win. In the kingdom and outside of it, people cheered and waved the country’s green and white flag to celebrate.

The Saudi flag itself carries two images that show its complicated place in the wider Arab world. It bears a white sword and the Arabic inscription of the shahada, a Muslim declaration of faith: “There is no god but Allah; Muhammad is the Messenger of Allah.” After the death of the Prophet Muhammad in 632 A.D., Islam spread from the austere desert reaches of the Arabian Peninsula that later would become Saudi Arabia.

Today, Saudi Arabia maintains beheading as a form of execution and is one of the world’s top enforcers of the death penalty. The kingdom also has used its oil money since the 1980s to export an ultraconservative view of Islam called Wahhabism into mosques around the world. Extremists have exploited Wahhabi organizations receiving Saudi funding as well.

That history, as well as regional politics, make a wholehearted embrace of Saudi Arabia more complicated for Arabs in the Mideast. While some celebrated Saudi Arabia’s win in the Gaza Strip, the Palestinian enclave blockaded by Egypt and Israel is ruled by the militant group Hamas. The kingdom, while not diplomatically recognizing Israel, now allows Israeli airlines overflight rights.

The limits also can be seen in Yemen, where Saudi Arabia has been fighting the country’s Iranian-backed Houthi rebels since 2015. Houthi Information Minister Daifallah al-Shami on Twitter offered “a thousand congratulations” to Saudi Arabia for placing “Arab football back on the map.” He later deleted the tweet and apologized.

“There are red lines that no party or person should cross,” al-Shami wrote.

The Saudi win, which the daily newspaper Okaz described as “restoring the glories” of the kingdom, also fits into the new, more nationalistic Saudi Arabia forming under Crown Prince Mohammed bin Salman.

As the prince has risen to power, the kingdom has socially liberalized by allowing women to drive, reopening movie theaters and curtailing its morality police. His comments to the team ahead of the tournament, urging them to “enjoy” the matches, have been repeated constantly in Saudi Arabia’s tightly controlled press.

But Prince Mohammed also led a self-described corruption crackdown targeting anyone with power in the kingdom. U.S. intelligence agencies believe the brutal slaying of Washington Post columnist Jamal Khashoggi at the Saudi Consulate in Istanbul came at his orders, something denied by the kingdom.

Meanwhile, economic competition between the United Arab Emirates and Saudi Arabia has been increasing as Riyadh tries to draw international business from Dubai. Qatar, which faced a Saudi-led boycott only two years earlier, has embraced the kingdom while solidifying ties with the United States as hedge. The inconclusive war in Yemen still rages.

Soccer provides a respite, but no panacea for those woes.

“You’d have to have a historical lobotomy to think this is a stable region,” said David B. Roberts, an associate professor at King’s College London who long has studied Gulf Arab nations.