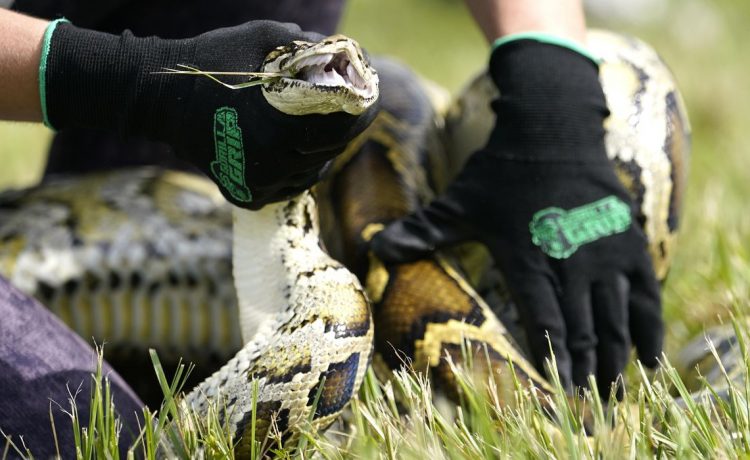 The competition lasted 10 days, ending Thursday, and involved over 1,000 competitors from around the world. Floridian Matthew Concepcion walked away with the grand prize for his 28 kills.

Mr. Concepcion told WTVJ-TV, a Miami NBC affiliate, that he hunts pythons due to the ecological impact the invasive species has had in the Everglades, where no predator is capable of culling pythons naturally.

“They kill everything. The pythons have destroyed 80% of our animals,” Mr. Concepcion said.

“Every one of the pythons removed as part of the Challenge is one less preying on our native birds, mammals and reptiles. This is a win for the Everglades and a win for the people of Florida,” said Florida Fish and Wildlife Conservation Commission Chairman Rodney Barreto.

The $10,000 grand prize is given out by the nonprofit Bergeron Everglades Foundation, headed by South Florida Water Management District Governing Board Member Ron Bergeron.

“Our python hunters are passionate about what they do and care very much about Florida’s precious environment. We are removing record numbers of pythons and we’re going to keep at it,” Mr. Bergeron said.

Mr. Concepcion has been hunting the non-native reptiles for five years, and told the South Florida Sun Sentinel that staking out snakes is a mental game. This year’s contest was his third time competing.

“It’s a love-hate relationship. Sometimes you’re out there for like 15 hours and you don’t even see one snake. And the next night you go out for the first five minutes you see three back-to-back. It’s definitely a mental game,” Mr. Concepcion said.

While Mr. Concepcion normally hunts on and near roads, where the warmth of the asphalt attracts snakes, this year he had to pivot to hunting near a canal.

“I worked a levee, caught a couple hatchings, and was like, ‘Dang, this might be the ticket!’ So every single night from then on, I went out there —  just before sundown to sunup,” Mr. Concepcion explained to the Sun Sentinel.

Mr. Concepcion was not the only prize winner. Most of the other prizes were given out by the government divided into professional and novice categories, with Edison National Bank providing the cash for the prizes of the military and active veteran category.

Among the other prize winners this year was Dustin Crum of Discovery Channel’s “Guardians of the Glades” TV show. Mr. Crum won the longest python prize in the professional category, netting $1,500 for a snake just over 11 feet long.