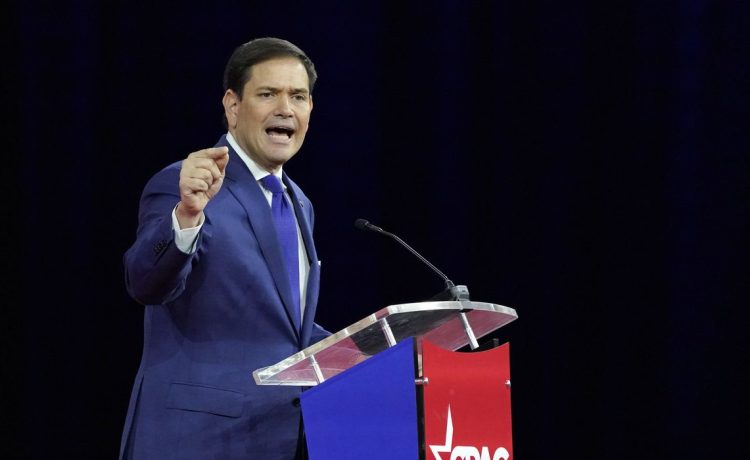 JACKSONVILLE, Fla. — Democrat Val Demings, once an underdog in the Florida race for the U.S. Senate, is closing in on incumbent Sen. Marco Rubio, putting in play a seat the GOP had once considered relatively safe as it battles to regain the majority in November.

Polls put Mrs. Demings, who represents the state’s 10th District in the U.S. House, within three points of Mr. Rubio, a Republican who is running for a third term. The race is starting to look like a toss-up.

While Mrs. Demings saturates the state’s major media markets with advertisements promoting herself as a tough-on-crime lawmaker who served as Orlando’s police chief, Mr. Rubio is struggling with his favorability ratings and is facing Democratic voters energized by the Supreme Court overturning nationwide abortion rights.

A string of recent polls shows Mrs. Demings has nearly closed what many believed would be an insurmountable gap in the Sunshine State, where Republicans outnumber Democrats by 250,000 voters.

Rather than a relatively easy path to victory in November for Mr. Rubio, the matchup has suddenly become a nail-biter.

Republicans aren’t panicking, at least in public. But they are beginning to worry that Mr. Rubio is not running with the same comfortable lead as Florida’s Republican Gov. Ron DeSantis, who has steadily held a 4-point to a 5-point advantage over Democrat Charlie Christ in his bid for a second term.

“I think Republicans should be concerned about that race,” American Conservative Union Chairman Matt Schlapp said on Newsmax when asked whether Mr. Rubio’s reelection bid was in trouble.

A source close to the Rubio campaign blames money.

Mrs. Demings has outraised Mr. Rubio by a 3-to-1 margin, said the source, who downplayed Mrs. Demings’ lead by noting it aligns with generic ballot polling.

“She’s spent over $17 million to perform about as well as a generic Democrat,” the source said.

In June, Mrs. Demings began using the cash advantage to blanket the state with powerful campaign ads that aim to distance herself from the defund-the-police faction in her party that has hurt swing-state Democrats. The ads define her as a tough-on-crime party moderate and exclude references to her liberal voting record.

Mrs. Demings, in one advertisement, promotes her 27 years on the police force, culminating with her rise to the rank of police chief. It boasts that during her tenure, violent crime in Orlando fell by 40%.

“In the Senate, I’ll protect Florida from bad ideas, like defunding the police,” Mrs. Demings pledges in the ad. She dismisses as “just crazy” the defund-the-police movement, which has been promoted by lawmakers in her own House Democratic Caucus.

Polling conducted in early spring showed Mrs. Demings trailing Mr. Rubio by about 8 points, but once the ads began airing this summer, her numbers jumped.

“We’ve been able to start doing that in June and that’s what’s really been the difference maker here.”

At the same time, Democrats have criticized Mr. Rubio’s pro-life position amid polling that shows their base is energized by the Supreme Court’s recent decision that leaves the legal status of abortion up to the states.

In an August online poll from the University of North Florida, 78% of Democrats said the Supreme Court decision on abortion has made them more likely to vote in November.

Mr. Rubio has tried to navigate a divided electorate without betraying his longtime pro-life position.

In late August, Mr. Rubio told a CBS-4 Miami television host who pressed him on abortion access following the Supreme Court decision that he opposed the procedure from the moment of conception. Mr. Rubio said he has always supported legislation that allows exceptions to an abortion ban, but also said that “the dignity and the worth of human life is not tied to the circumstances of their conception.”

Mr. Rubio’s campaign ads promote him as an effective senator and highlight bills he has helped usher through Congress. Among the most prominent was legislation providing grants to small businesses to help them survive forced closures during the COVID-19 pandemic as well as a measure to provide care to veterans who suffered the effects of burn pits while serving in the military.

But Mr. Rubio, at least in some polls, is struggling to win the approval of the majority of Florida voters.

Mrs. Demings has the chance to win over valuable independent voters who have not made up their minds about her, Mr. Ward told the Times, while Mr. Rubio’s campaign could seize on the chance to fill the Demings knowledge gap among voters with their own negative campaign blitz.

“Both sides in this race have an opportunity to define who Val Demings is,” he said.

Mr. Rubio is working to define Mrs. Demings as a rubber stamp for President Biden, whose low approval ratings are dragging down House Democrats.

“Val Demings claims she’s running to represent all of Florida, but she has never once rejected Joe Biden’s agenda or his rhetoric,” Mr. Rubio told Fox News.