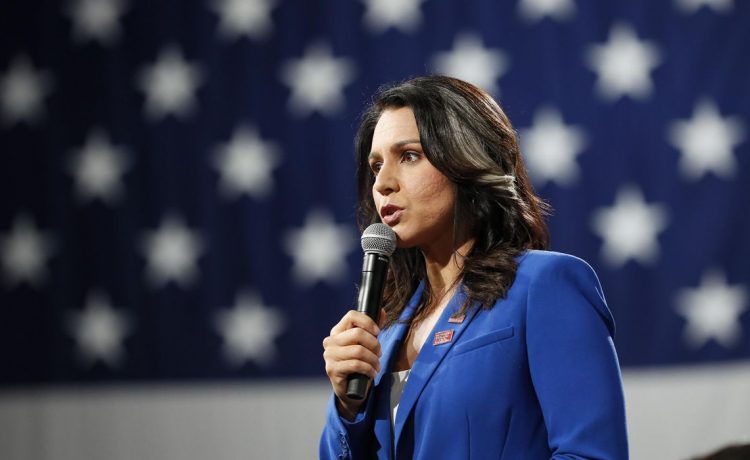 Former Hawaii Rep. Tulsi Gabbard doubled down on her scorched-earth takedown of the Democratic Party on Wednesday, calling Vice President Kamala Harris a representation of “everything that is wrong with Washington.”

The now politically unaligned former Democratic presidential candidate made her loud exit on Tuesday, thrashing her former party as one “driven by cowardly wokeness” that seeks to divide Americans “by racializing every issue and stoking anti-White racism.”

“I made the decision to leave the Democratic Party alone because of the fundamental problems with this woke ideological leadership in the party,” she told Fox News’ Brian Kilmeade on Wednesday. “To be associated with a party that is driven by this woke insanity, essentially opposing and undermining our freedoms, is not something that I could do any longer.”

She also dusted off her campaign feud with the vice president. During a 2019 debate, Ms. Harris dug into Ms. Gabbard for spending “four years, full time, on Fox News criticizing President Obama.”

Ms. Gabbard hit back by accusing Ms. Harris of trafficking “in lies and smears and innuendos because she cannot challenge the substance of the argument that I’m making.”

On Wednesday, Ms. Gabbard went further, calling out the vice president for what she says are double standards that have gone unaddressed by Democrats.

“Nothing happened to her when she smoked pot, but she was very happy to keep people in prison and put people in jail for doing the same thing,” she said. “We had a person running for president who she claimed to be very proud of her record. And so I took the opportunity to hold her to account for that and explain to the American people why she did what she did.”

“Kamala Harris is a perfect example of everything that is wrong with Washington and the Democratic Party of today,” she said.

The vice president’s office did not immediately respond to a request for comment.

Ms. Gabbard’s falling out with her party comes as little surprise, given her previous tussles with Democratic kingpins.

Hillary Clinton once smeared her as a “Russian asset” after announcing her bid for president. Mrs. Clinton said, without offering proof, that the Kremlin was “grooming” Ms. Gabbard, who ran as a Democrat, as a third-party candidate.

Ms. Gabbard sued Mrs. Clinton for defamation over the comment. The case was later dropped.

Ms. Gabbard endorsed President Biden after withdrawing from the presidential race in 2020, but has been a vocal critic of his policies since taking office.

White House Press Secretary Karine Jean-Pierre declined to comment on Ms. Gabbard’s exit from the party when asked aboard Air Force One on Wednesday.

Ms. Gabbard has yet to affiliate with any party since announcing her exit.