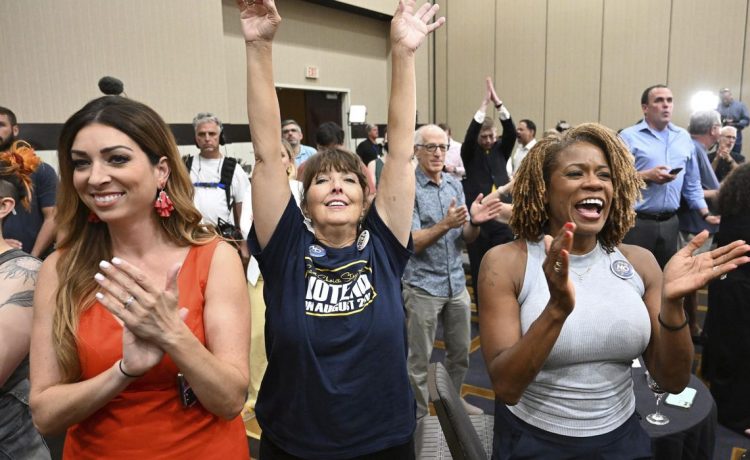 California, Kentucky, Montana and Vermont also will put abortion rights on the ballot in November in the wake of the Supreme Court ruling that overturned the Roe v. Wade decision and left abortion laws to the states.

Kansas voters on Tuesday resoundingly rejected a proposed measure that said the right to abortion is not protected by the state constitution. About 60% of voters voted “no” on the ballot question, enthusing pro-choice Democrats looking for momentum in the midterm elections.

Now the focus shifts to other states.

In California, voters will weigh in on a measure that says the state cannot “deny or interfere with an individual’s reproductive freedom in their most intimate decisions.”

Gov. Gavin Newsom, a Democrat, has positioned California as a sanctuary state for abortion. He signed an executive order in June that said state agencies will not share medical records with investigators in states that ban the procedure and try to track down women who seek the procedure in California.

“California will not back down from the fight to protect abortion rights as more than half the states in this country, enabled by the Supreme Court, ban or severely restrict access,” Mr. Newsom said at the time. “We are ensuring Californians will have the opportunity this November to enshrine the right to choose in our state constitution.”

Similarly, Vermont voters will be asked whether they support adding language to the state constitution that would protect a right to “personal reproductive autonomy” and “prohibits government infringement unless justified by a compelling state interest.”

Kentucky voters on Nov. 8 will vote on a question that would move the Bluegrass State in the opposite direction from places like California and Vermont.

If approved, the ballot question would make clear that nothing in the Kentucky constitution establishes a right to abortion or requires government funding for the procedure.

Several other states have constitutional provisions that make it clear that abortion is not protected.

Kentucky banned abortion under a “trigger law” that took effect after the Supreme Court’s decision in late June. An appeals court upheld Kentucky’s ban this week amid an ongoing legal battle.

Specifically, a “yes” vote would affirm that:

• Infants born alive at any stage of development are legal persons.

• Medicare care must be provided to infants born alive after an induced labor, cesarean section, attempted abortion, or another method.