Frustration with Ukraine war spills out on Russian state TV 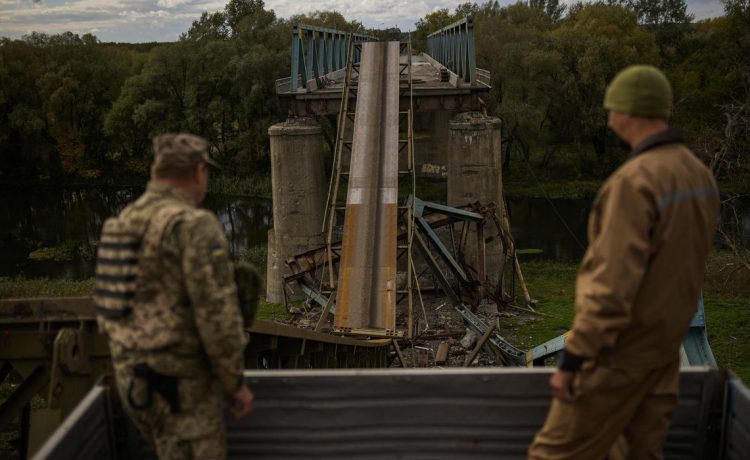 A series of embarrassing military losses in recent weeks has presented a challenge for prominent hosts of Russian news and political talk shows struggling to find ways to paint Ukraine’s gains in a way that is still favorable to the Kremlin.

Frustration with the battlefield setbacks has long been expressed in social media blogs run by nationalist pundits and pro-Kremlin analysts, and the volume grew after Ukraine’s counteroffensive last month around Kharkiv in the northeast. But it is now spilling out on state TV broadcasts and in the pages of government-backed newspapers.

The less conciliatory tone from state-run media comes as President Vladimir Putin faces widespread Russian discontent about his partial mobilization of reservists and as government officials struggle to explain plans to annex Ukrainian regions at the same time they are being retaken by Kyiv’s forces.

“The Russian defeat in Kharkiv (region) and Lyman, combined with the Kremlin’s failure to conduct partial mobilization effectively and fairly are fundamentally changing the Russian information space,” Washington-based Institute for the Study of War said in a report.

On Sunday, after Ukraine recaptured Lyman, a city in the east that Russian troops had used as a key logistics and transport hub, Putin’s media allies dropped the niceties and more directly criticized his military, saying tougher measures were necessary for the sake of victory.

“What happened on Saturday, Lyman – it is a serious challenge for us,” Vladimir Solovyov, host of a prime-time talk show on state TV channel Russia 1 and one of the Kremlin’s biggest cheerleaders, said on air Sunday. “We need to pull it together, make unpopular, but necessary decisions and act.”

Ukrainian forces retook Lyman one day after Moscow celebrated its illegal annexation of four Ukrainian regions, including Donetsk, roughly 40% of which – now including Lyman – is under Kyiv’s control.

The move paves the way for Ukrainian troops to potentially push even further into land that Moscow illegally claims as its own. Ukrainian forces scored more gains in their counteroffensive across at least two fronts Monday, advancing in the very areas Russia moved to absorb.

The leader of Chechnya, a Russian region in the North Caucasus, blamed the retreat in Lyman on one general. In an online post, Ramzan Kadyrov, an outspoken supporter of the Kremlin, said the general’s incompetence was being “covered up for by higher-up leaders in the General Staff,” and called for “more drastic measures” to be taken.”

A story about the Lyman retreat in Russia’s popular pro-Kremlin tabloid, Komsomolskaya Pravda, painted a bleak picture of the Russian military. The story, published Sunday, said the Russian forces in Lyman were plagued by supply and manpower shortages, poor coordination, and tactical mistakes orchestrated by military officials.

“It’s like it has always been,” according to an unnamed soldier quoted in the story who was part of the group that retreated from Lyman to Kreminna, another strategically important city that is in the sights of the Ukrainian army. “There is effectively no communication between different units.”

Posting on the social media app Telegram, Russian war correspondents working for state media were also abuzz with reports of the retreat, and some expressed concern about Ukraine’s further push towards Kreminna.

“It turns out that the Armed Forces of Ukraine pushed through our defense 30 kilometers in the direction of Luhansk in two days … So they don’t even let (the Russian forces) settle near Kreminna. Wow,” Russia 1 war correspondent Alexander Sladkov wrote on his Telegram channel that currently has almost 940,000 followers.

Hosts of popular news and political talk shows on the state Russia 1 TV channel on Sunday described the loss of Lyman as a “tough situation.”

On Sunday, solders quoted by state-run media gave analyses of the situation that at least partly meshed with Putin’s: They blamed the Russian army’s difficulties on NATO, saying that members of the alliance provided weapons and even fighters to Ukraine.

“It is not a game, it hasn’t been a game for a long time already,” one soldier told a Russia 1 reporter in the Donetsk region. “It is a painstaking, clear offensive of the NATO army.”

To back up his claim, the soldier claimed that communications intercepted by the Russian army feature people speaking Romanian and Polish; he didn’t explain how he or other soldiers could recognize either of the languages.

Media personalities also echoed the argument that Putin has been making.

Prime-time show host Solovyov in his program on Sunday stressed that Moscow is “not dealing with Ukraine – we’re past that. We’re dealing with the entire NATO bloc, with the might of its military industrial complex.”

He warned “not to wait for good news” from the battlefield any time soon. “One must have a long will and strategic patience,” Solovyov said.