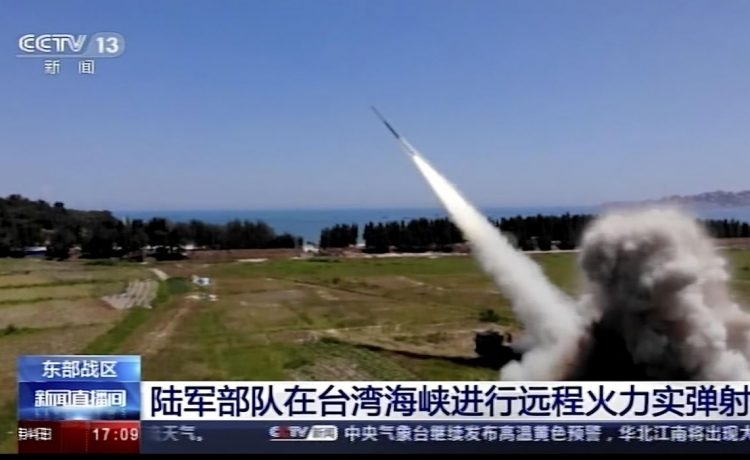 China staged extensive naval exercises and launched almost a dozen ballistic missiles into the waters surrounding Taiwan on Thursday, less than 24 hours after Speaker Nancy Pelosi’s visit to the island, where she promised the U.S. would not abandon the vibrant democracy amid bellicose threats from Beijing.

Her whirlwind trip to Taiwan may have been brief but it caused a hurricane of reactions, including headaches for the White House which wanted Speaker Pelosi to call off the visit.

A spokesman for Taiwan President Tsai Ing-wen said China fired 11 Dongfeng series ballistic missiles into waters to the northeast, southwest, and east of the island. The Japanese Defense Ministry said that four of the Chinese missiles may have flown over Taipei, the capital city.

Beijing considers Taiwan part of its sovereign territory and Mrs. Pelosi’s visit a violation of pledges by Washington not to encourage the island democracy to take more steps toward independence.

President Tsai criticized the drills in a public video address, saying China “destroyed the status quo and violated our sovereignty” with its “irresponsible actions,” the Associated Press reported. “We are calm and not impulsive, we are reasonable and not provocative, but we will also be firm and not back down.”

The Biden White House has said it did not have the power to stop Mrs. Pelosi and a delegation of congressional Democrats from going to Taiwan, and insisted her visit did not mark a change in U.S. policy. National Security Council spokesperson John Kirby accused China Thursday of “overreacting” to the one-day stopover by the lawmakers.

The Pentagon announced steps Thursday both to bolster Taiwan’s defenses and avoid further escalation with Beijing, directing the aircraft carrier USS Ronald Reagan to remain in the area near Taiwan “to monitor the situation,” but also delaying for a brief period a planned test of a Minuteman III intercontinental ballistic missile, according to Mr. Kirby.

But Chinese officials described Thursday’s military actions as a “necessary response” to the actions of Washington and Taipei regarding what Beijing considers “dangerous moves” on the Taiwan question, Chinese officials said.

“The military operation will fully test the military equipment and joint combat capability of the [People’s Liberation Army] forces and prepare them for all possible emergencies,” said Maj. Gen. Gu Zhong, deputy chief of staff for the PLA’s Eastern Theater Command.

The row over the speaker’s trip — the highest-level American official to visit Taipei in a quarter-century — also prompted China’s top diplomat to cancel a meeting with his Japanese counterpart that was scheduled to take place on the sidelines of an international conference in Cambodia. Japan endorsed a G-7 statement Wednesday criticizing China’s sharp response to the Taiwan visit and appealing for restraint.

China has vowed to unify Taiwan with China, peacefully if possible but by force if necessary. The rapid pace of China’s military modernization has prompted some analysts to think an invasion is not only plausible but likely at some point.

Assurances from the White House that the U.S. still holds to the “One China” policy that recognizes the People’s Republic of China as the sole legal government of China are seemingly doing little to assuage Beijing’s anger over Mrs. Pelosi’s visit.

“This is our stern message to the ill-intended officials and separatist forces seeking Taiwan’s independence. The PLA Eastern Theater Command has full confidence and capability to counter any provocations and resolutely safeguard China’s national sovereignty and territorial integrity,” Maj. Gen. Gu said.

Some analysts say Washington needs to be cautious about whipping up fervor over Taiwan at the same time it is trying to militarily support Ukraine against an invasion by Russia.

“There already is an intense war going on in Eastern Europe. The idea that we might confront basically two wars at once should cause us to be not just cautious but extremely cautious,” said Lyle Goldstein, Director of Asian Engagement with the DC-based Defense Priorities think tank.

“The extensive drills, which essentially represent a blockade, create immense risks for passengers in civilian airlines and ships on the high seas,” the two senators said in a statement. “Beijing should not be under any false illusion that these military drills will lessen resolve in the U.S. or elsewhere, or erode our commitment to stand with the people of Taiwan and their right to determine their own future.”

— Joseph Clark contributed to this report. 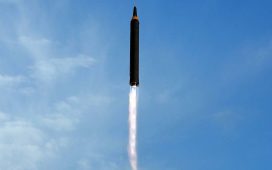