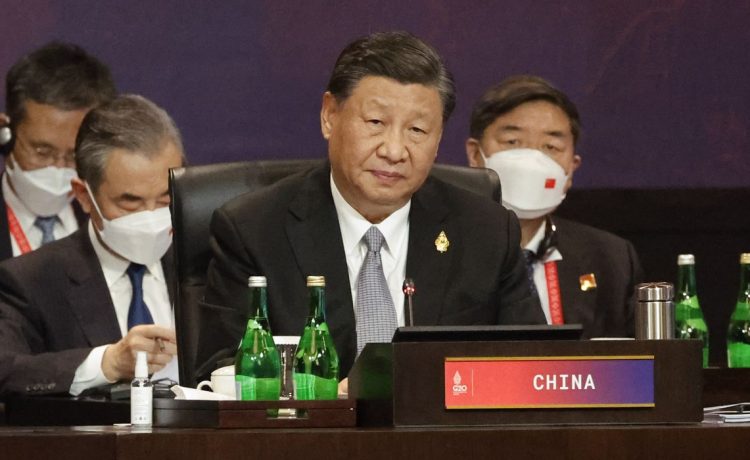 Chinese President Xi Jinping went along with the Biden administration’s push for the Group of 20 leading economies to deliver a declaration firmly condemning Russia’s war in Ukraine, but Chinese media sharply criticized the way the declaration was presented as a diplomatic victory for Washington.

Mr. Xi spent much of this week’s G-20 summit in Indonesia attempting to steady China’s rocky relationship with the U.S. and other Western powers, but there were signs of deep frustration in Beijing Wednesday over how the summit ended with a focus on the war in Ukraine and a barely veiled attack on China’s ally Russia.

While the joint declaration was presented by Western media outlets as a collective G-20 condemnation of Russia, the document actually “reflected differences and disagreements” among G-20 countries over the Ukraine conflict, asserted a lead article in one of China’s most prominent newspapers.

“West hypes irrelevant topic” was the headline of an article published Wednesday by the Beijing-based Global Times. The Chinese Communist Party-aligned paper lamented that Western media ignored how the declaration stated “that there were other views and different assessments of the situation and sanctions.”

China insists it is neutral in the war, but has refused to condemn Russia’s invasion and argued that an expansionist NATO was the root cause of the conflict. Such differences have been clear “since the Russia-Ukraine conflict broke out in February … with the West holding a hawkish stance against Russia, and many other non-Western countries like China, India, South Africa and Saudi Arabia being more neutral,” the Global Times article asserted.

“It seems like the U.S. and some Western countries want to use the G-20 declaration to maximize their hostile voice toward Russia, without considering the unity among the international community,” it said.

Russia, a member of the G-20 which was largely shunned at the G-20 gathering, also challenged the narrative that the group had jointly condemned its war.

Dmitry Peskov, the top spokesman for Russian President Vladimir Putin’s government, told reporters Wednesday that Russia felt the declaration showed how some major powers are actually aligned with Moscow on Ukraine. “Different approaches and different views on the issue were taken into account and recorded in the declaration,” Mr. Peskov said, according to the Russian news agency Tass.

Still, U.S. officials and some private analysts were claiming a diplomatic win for President Biden, as fellow world leaders of both developed and developing countries denounced the war and its negative impact on the global economy, despite the divisions among the group. Mr. Putin did not attend this year’s summit, sending Foreign Minister Sergey Lavrov to represent him in Bali.

“The G-20 left no doubt about who it knew had started the war and how it should end,” he told The Associated Press, claiming that the declaration indicated an “active shift” by China and India, which joined the “democratic side of the great immediate geopolitical divide.”

The declaration itself said “most members” of the G-20 “strongly condemned the war in Ukraine and stressed it is causing immense human suffering and exacerbating existing fragilities in the global economy — constraining growth, increasing inflation, disrupting supply chains, heightening energy and food insecurity, and elevating financial stability risks.”

“There were other views and different assessments of the situation and sanctions,” the final statement added. “Recognizing that the G20 is not the forum to resolve security issues, we acknowledge that security issues can have significant consequences for the global economy.”

The document also highlighted language from a March U.N. resolution that deplored “in the strongest terms the aggression by the Russian Federation against Ukraine” and demanded “its complete and unconditional withdrawal from the territory of Ukraine.”

Summit host Indonesian President Joko Widodo said Wednesday that the language on Ukraine was the “most debated” part of the G-20 declaration, a 17-page document with sections on a range of other matters, including global food and energy security.

“Until late midnight yesterday we discussed about this, and at the end the Bali leaders’ declaration was agreed unanimously in consensus,” the Indonesian president said, according to CNN, which characterized the declaration as “a major victory for the United States and its allies.”

The conflict in Ukraine loomed large over the two-day summit held on the tropical island of Bali in Indonesia.

News early Wednesday of an explosion that rocked eastern Poland prompted U.S. President Joe Biden to hastily arrange an emergency meeting with G-7 and NATO members gathered at the summit.

Poland said the blast near the Ukrainian border was caused by a Russian-made missile and that it was investigating what happened. NATO officials said it appeared an errant Ukrainian defensive missile, responding to a Russian aerial assault, was responsible fro the strike inside Polish territory which killed two people. Russia denied involvement.