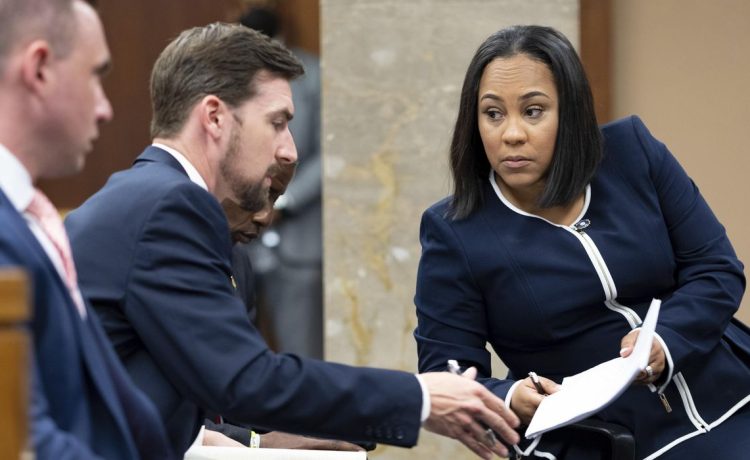 A Georgia district attorney urged a judge Tuesday to suppress a special grand jury’s report on possible crimes by former President Donald Trump and his allies in their efforts to overturn the state’s 2020 presidential election, saying she will decide soon whether to bring charges.

“Decisions are imminent,” Fulton County District Attorney Fani Willis, a Democrat up for reelection next year, told the judge.

After investigating for eight months and hearing from 75 witnesses, the special grand jurors recommended that its report be made public.

The special grand jury was dissolved earlier this month.

Superior Court Judge Robert McBurney said he will decide later whether to release any of the report, saying the issue “is not simple.”

“What’s extraordinary is what’s at issue here — the alleged interference with the presidential election,” the judge said.

If the special grand jury’s report does recommend criminal charges, Ms. Willis would need to convene a new grand jury to consider indictments. In the meantime, she said, prosecutors “have to be mindful of protecting future defendants’ rights.”

“We want to make sure that everyone is treated fairly. It is not appropriate at this time to have this report released,” she told the judge.

Lawyers for a coalition of media companies, including the Atlanta Journal-Constitution and the Associated Press, argued in court Tuesday that the report should be made public immediately.

Attorney Tom Clyde said the special grand jury’s “veil of secrecy has come to an end.”

“The faith of the public in the court system is much improved by operating in a public way,” Mr. Clyde told the judge. “The jurors themselves have asked for the report to be published. There is enormous public interest in what they have said.”

Among the witnesses who were called to testify in the probe were former White House Chief of Staff Mark Meadows, former Trump attorney Rudolph W. Giuliani, and Sen. Lindsey Graham, South Carolina Republican.

The special grand jury investigated matters including an infamous phone call on Jan. 2, 2021, between Mr. Trump and Georgia Secretary of State Brad Raffensperger; the appointment of 16 “alternate” Republican electors for Mr. Trump; and efforts to pressure a Fulton County poll worker to falsely claim she committed election fraud.

There were no lawyers in the courtroom Tuesday representing Mr. Trump or other potential targets, including the 16 Republicans who signed certificates claiming to be Georgia’s valid presidential electors.

The special grand jury did not request Mr. Trump’s testimony.

But the former president weighed in about the case Tuesday in a series of posts on his Truth Social platform, saying he had “an obligation” to call Georgia officials in protest of the 2020 election.

Referring to his phone call with Mr. Raffensperger, Mr. Trump offered a likely defense if criminal charges are brought.

“With many people on the line on what was a PERFECT call protesting the Rigged Georgia Election, which I have a clear right to do, and in fact an obligation to do since I made the call as President, how come not one person said, while on the call, that I acted inappropriately, or made a statement of protest at what I said, & then slammed down the phone,” Mr. Trump wrote. “Not one, even with so many opposing people, lawyers, and others on the line. NO ADMONISHMENT at all.”

On the call, which was recorded, Mr. Trump asked Mr. Raffensperger to “find” 11,780 votes, enough to give him more than Mr. Biden in Georgia. State officials certified Mr. Biden’s victory and found no evidence of voter fraud.

Mr. Trump insisted again Tuesday that his phone call was “perfect” and that his opponents cheated in the election.

“Many people, including lawyers for both sides, were knowingly on the line,” he wrote.

He said Georgia’s presidential election was “RIGGED AND STOLLEN.”

“We have all the evidence needed. That is the CRIME!” Mr. Trump said.