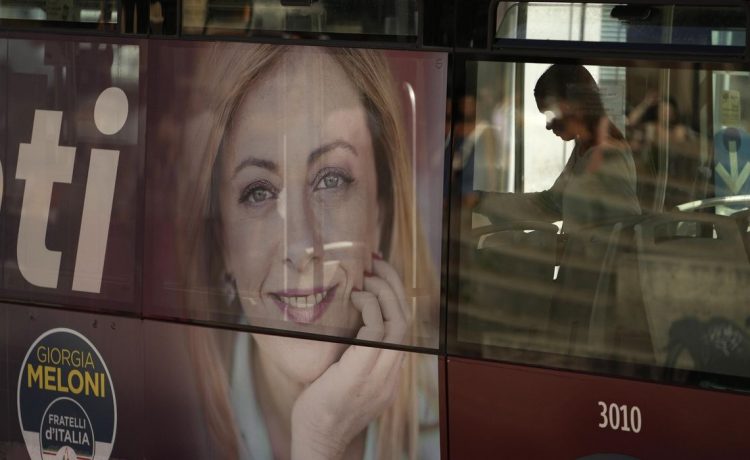 ROME — As support for her political party grew in recent months and, improbably, it appeared she might have a shot at becoming Italy’s first female prime minister, Giorgia Meloni stepped up efforts to distance herself from her far-right, euro-skeptic, fascist past.

No, she has no plans to push for a Brexit-style withdrawal from the European Union if she becomes Italy’s head of government after the country’s Sept. 25 general election. Yes, she has expressed admiration for Italy’s World War II strongman leader Benito Mussolini, but he’d be no model for her government.

She’s not an extremist, she argues. Italy will remain a reliable partner to its Western allies, and won’t embrace the affinity for Russia and President Vladimir Putin that some Italian conservatives have espoused. Unlike, say, far-right French leader (and two-time presidential election loser) Marine Le Pen, moderates here can trust her with power.

“They’ll accuse me of being a fascist my whole life,” she said in a recent interview. “But I don’t care because in any case the Italians don’t believe anymore in this garbage.”

Not all voters — or many in the Italian political establishment — are buying the pitch. The rise of the 45-year-old Ms. Meloni and her Brothers of Italy party in the polls has spooked investors on the Italian Stock Exchange and on bond markets. On Friday, former Prime Minister Giuseppe Conte charged that Ms. Meloni showed she was “unfit to govern” after backing Hungarian authoritarian leader Viktor Orban in his row with European Union leaders over his nationalistic, anti-immigrant stands.

Earlier this month, Salvatore Benintende, an Italian urban artist and social commentator known by his pen name TvBoy, went viral in Italy with a provocative mural painted on a Milan street showing a boy putting the word “hate” along with a Nazi swastika and a Brothers of Italy logo into a trash bin labeled “Non-Recyclable Waste.”

“People are who they are,” Mr. Benintende said in an interview. “Meloni can say the right things now, but she’s already shown us what she believes. There are hateful beliefs that cannot be cleaned up and recycled.”

Despite all that, the Brothers of Italy party is all but guaranteed to finish first in the Sept. 25 vote. During the last Italian general election, in 2018, the party was almost an afterthought, earning 4.4% of the vote and finishing fifth. The last round of polls in early September (Italian election rules prohibit the release of polls within two weeks of election day) predicts the party will beat all comers with at least a quarter of the overall vote and be in the driver’s seat in assembling a conservative coalition government.

Brothers of Italy has also bolstered its opposition credentials by being the only major political party to remain outside the current government coalition headed by centrist former European Central Bank chief Mario Draghi. Mr. Draghi’s broad coalition struggled to remain intact amid the economic fallout from an unusually long and hot summer drought and the impacts from the war in Ukraine, which has sent energy and food prices skyrocketing.

While Ms. Meloni has promised Italy will remain a constructive partner in Europe, her controversial support for Hungary’s Mr. Orban is the latest in a series of incidents showing she will not unquestioningly accept edicts from Brussels, something she accused the Draghi government of doing.

Some say the upstart leader has another strong, conservative female role model in mind as she campaigns.

“Meloni is trying to set herself up as a kind of contemporary, Italian version of [former U.K. Prime Minister Margaret] Thatcher,” Giuseppe De Arcangelis, a professor in the Department of Social Sciences and Economics at Rome’s Sapienza University, told The Washington Times. “She wants to be seen as someone who is not afraid to challenge the traditional powers.”

That is a message that appears to resonate in Italy, a country that in recent years has lurched from one emergency to the next, from immigration crises to the coronavirus pandemic and from this summer’s drought to record-setting inflation. With the Italian left enfeebled and the idea of a broad centrist coalition government unpopular, pundits an opening for a conservative alternative.

Ms. Meloni presents a different profile from some other prominent far-right leaders on the continent. She is committed to NATO and has strongly supported Western support for Ukraine in the war with Russia, despite the fact that Italy is highly dependent on Russian oil and gas.

But she takes unapologetically conservative stands on controlling illegal immigration — perhaps her signature issue — and social issues such as abortion and same-sex marriage. Her working-class roots and plain-speaking stump style are also considered an asset, as well as her populist attacks on what she calls excessive European Union interference in Italian life.

“Don’t let Brussels do what Rome can best take care of, and don’t let Rome alone take care of what it cannot solve on its own,” she said in a recent debate, adding pithily, “If I win, for Europe, the fun is over.”

A growing number of voters are willing to give the onetime fringe candidate, an unmarried mother of one, a shot.

“We’ve given everybody else a chance, so let’s see what the Brothers of Italy can do if they’re in charge,” said Marcantonio Bandini, a 34-year-old coffee bar worker in Garbatella, the Rome neighborhood where Ms. Meloni started out as a political activist 30 years ago. “We can’t do worse than we’ve been doing.”

“Unlike most of the political class, she knows what it’s like to struggle,” Silvestri said.

Even if the polls are correct and the Brothers of Italy finish first, that does not mean Ms. Meloni is a shoo-in to become prime minister. To do so, she will have to assemble a coalition of parties that total at least half of the new parliament. That could be a challenge given that the leaders of the other main right-of-center parties — most notably 85-year-old billionaire media tycoon Silvio Berlusconi and Matteo Salvini, a figure who preceded Ms. Meloni as Italy’s anti-migrant standard bearer — could have misgivings about taking on supporting roles.

Mr. De Arcangelis also noted that if Ms. Meloni manages to cobble together a coalition, her lack of high-level political experience (she has been a member of parliament since 2006, but her most important position so far has been minister of youth in a Berlusconi government for three years more than a decade ago) on a national or European level could make it difficult for her to govern.

“If Meloni becomes prime minister, I think there are two ways things could go,” Mr. De Arcangelis said. “She could change the balance of power in Europe between the populists and the non-populists, or the government could struggle this winter with energy supply and a slower economy and then in six months or a year her government will fall and we’ll have another crisis.”